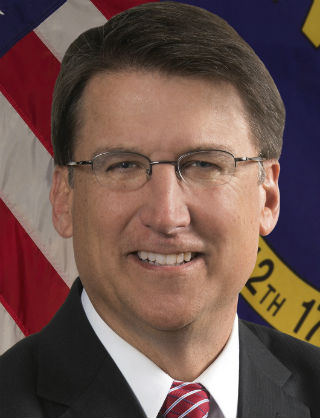 Energy education will be key, the governor said as he responded to questions from Greater Wilmington Business Journal publisher Rob Kaiser and audience members on Thursday afternoon at the Wilmington Convention Center.

“Frankly, the energy acumen of this country is at a first-grade level because we learn about energy, frankly, through commercials,” he said, adding that groups who oppose fracking and coal are spending $2 million on ads that target his policies.

“Every energy source has a positive and a negative, and they all have short-term and long-term ramifications regarding costs, regarding production, regarding execution” and other areas, McCrory said. “Most people think it’s about turning on a light switch when it’s much more complicated than that.”

As the governor discussed how energy programs will be paid for, using the example of the Gulf Coast, two hecklers shouted questions to him from their seats in the 350-member audience in the convention center's ballroom.

“The Gulf Coast did not get a good deal out of the oil drilling that’s been happening there,” a female said as she was escorted out of the room by security. “There’s plenty of impoverished people in the Gulf shore.”

In response, McCrory said, “I welcome people who ask tough questions, and I encourage dialogue.”

He continued to address the statements by saying, “I’m telling you that if we want to continue to have the great quality of life that we have, the economic prosperity, and if you want to create jobs, we need to participate in energy independence . . . For that individual or other individuals who will now get in their cars or fill up with gas…they’re using energy from the same sources they’re protesting against.”

During McCrory’s appearance, dozens of protestors with signs opposing fracking and other energy-generating measures, seen by some as potentially harmful to the environment, marched outside the convention center.

“Obviously, there’s a lot of environmental concerns,” the governor said, adding that to address those, measures and policies must be in place to ensure the safe implementation of exploration and execution of addressing energy needs. Politically, “we have to have very honest conversation from both the left and the right on these energy issues.

“We typically only have shouting as opposed to an intellectual discussion on the pros and cons” of all types of energy, from coal to solar power to wind energy," he said.

Discussing the potential threats of seismic testing to marine life, one of the concerns of the protestors in front of the convention center Thursday, who held a giant stuffed sea turtle aloft during their protest, McCrory said, “From all indications, it’s very safe” with procedures in place to protect the environment.

Power generation and exploration are two subsets of the energy conversation, McCrory said. Exploration has to come first and immediately, he said.

“We finally got permission, thanks to the President [Obama] and the interior secretary to begin seismic testing offshore to find out what we do have,” the governor said, with the process expected to begin in the next two years. “There hasn’t been any type of testing for well over 25 years.”

The second goal will be negotiating with the federal government for revenue sharing, he said. The cost is estimated to be several billion dollars over a 17-year period.

“A fairly large percentage should go to the coastal region in the Carolinas,” McCrory said, with some of the money going toward beach renourishment and dredging to keep shipping channels open at state ports.

A 550-mile natural gas pipeline coming from West Virginia to eastern North Carolina, a $4.5 billion joint venture between Duke Energy, Piedmont Natural Gas, Dominion and AGL Resources, is expected to begin delivering natural gas to customers by late 2018, the governor said in September when he announced the pipeline.

On Thursday, McCrory said the pipeline has the potential to re-energize the eastern part of the state’s economy.

He said the low cost of natural gas is stalling the development of other energy sources.

With regard to solar power, costs are going down, McCrory said. “Sooner or later, all types of power generation are going to have to start standing on their own, but we also have to give these industries time, and that’s what we’re doing in North Carolina, trying to give investors time to make it a revenue-neutral or even profitable in the long-term.”

Thompson said he thinks wind energy will have a significant impact on ports, especially the state port in Wilmington, but brings its own specific challenges. “This is one segment where regulatory obstacles have actually increased.” He also said wind energy faces some of the same obstacles discussed in an earlier session at the summit featuring American Petroleum Institute president Jack Gerard.

Another challenge for the wind energy industry is the cost factor, McCrory said.

Turning to another area of concern, the need for energy independence has geopolitical ramifications as well, officials said.

Frank Gorham, chairman of the Coastal Resource Commission, spoke as the father of a son in the military when he addressed the governor from the audience.

“People don’t realize that my son [who has been deployed overseas four times] probably wouldn’t be deployed today because we are less dependent on energy than we were five or six years ago.”

To that, McCrory said, “The wars and the investments in those wars and conflicts and the loss of life more than anything else has often been over energy.”

The next crucial step will be planning. “I think we need a 25-year energy plan. We’ve got to show the public exactly where our energy is going to come from in the future,” the governor said.