For Restaurants And Retailers, Proposal In Works To Boost Business 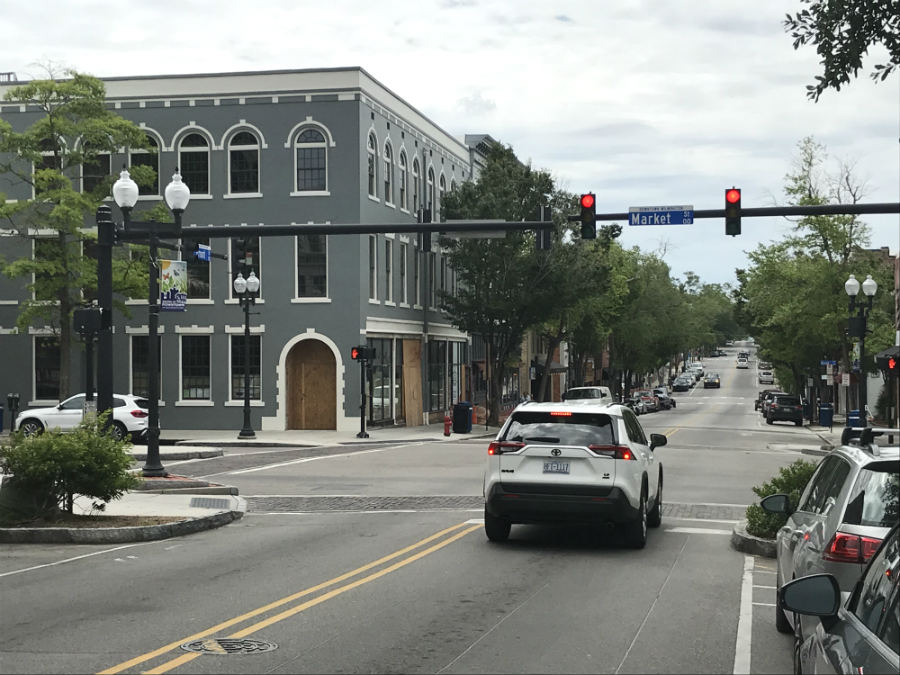 A proposal in the works could close off some city streets to vehicular traffic to allow restaurants to expand their capacities. (Photo by Cece Nunn)
The ability to put more outdoor seating at downtown Wilmington restaurants would help make ends meet at a time when many are hoping to pick up the pace after being closed since March, said Hell's Kitchen Owner Eric Laut.

When Hell’s Kitchen opens its doors to the public at 5 p.m. Friday – the time when phase two of the state's reopening plan takes effect – he will be able to seat about 75 diners in a space that could normally seat 150.

“Right now the business model is 50% open," Laut said. "And we’re obviously going to observe that model. But if you can wait tables on the streets, if I could get up to 75% to 80% capacity, that’s huge for being able to be profitable.”

A proposal is in the works as part of the Downtown Alive initiative, spearheaded by the Downtown Business Alliance (DBA), to help businesses expand their capacities outdoors and into streets.

DBA started off the movement with a survey earlier this month that garnered nearly 970 responses, 139 of those responses from business owners, with nearly 97% of respondents in approval of the idea.

The initiative, however, couldn't begin until the second phase of reopening the state's economy.

Following a meeting late this week with several city of Wilmington staff members and other key players that would be involved, DBA President Terry Espy said the consensus at the meeting was to move forward with the initiative.

“We are currently preparing a proposal to present to city council,” Espy said Friday, adding that she is working with city staff and other area groups like Wilmington Downtown Inc.

The aim is to get a proposal done as soon as possible, she said.

"There was nothing that came up that would prevent this from happening," Espy said of the meeting.

City spokesman Dylan Lee said Friday that a date for hearing the proposal has not been set, adding, "We will determine a timeline moving forward once we receive the proposal."

Local leaders are now starting to iron out the details of closing area streets and how it might work to allow more room for restaurants and retailers to operate.

“Whatever we can do on a temporary basis to help these businesses survive, I’m for,” Wilmington Mayor Bill Saffo said this week.

Such a task, however, is not an easy undertaking and the legalities at least behind certain issues such as policing and permitting still need to be looked at, the mayor said.

A similar movement is already happening in the town of Carolina Beach.

To promote additional economic opportunities for restaurants in the town, Mayor LeAnn Pierce amended the state of emergency declaration to give special allowances for outdoor dining that will create additional seating areas for restaurant diners, stated a news release.

The proclamation temporarily eases current regulations and allows Carolina Beach restaurants the ability to use up to 25% of their parking area for outdoor customer dining, state the release.

“Restaurants that wish to participate in this program should submit a proposed site plan of the additional seating area to the Town for review/approval. Any extra outside dining sections are subject to all safety measures and restrictions included in the Governor’s order,” officials said.

From a legal standpoint for the Downtown Alive initiative could be treated more in line with street closures for events, Espy said, adding that city attorneys are being consulted on the matter.

"This cannot just be a downtown issue," Saffo said. "We have restaurants and small businesses all over this community and we’ve got to take into consideration, everybody."

But at least for downtown, closing streets is no new feat for the city, which frequently closes downtown roads for events, parades, farmers markets and festivals, he said.

It’s also about keeping a positive downtown experience while working with all types of merchants, Saffo said.

Sen. Harper Peterson (D-New Hanover) has been working on the legal issues at the state level, he said this week.

He said, "My questions to legal experts in Raleigh: Can we do this on an interim basis where we expand our seating? If we have seating permitted already, can we expand that into the public space, to the curb or wherever deemed appropriate? And could we expand with that business, a private business, if they had a license to sell alcohol, could they expand that with the physical expansion? So, those are the questions that I've been asking and working on ... [with] the legislature to make this happen."

At the state level, Peterson said there is legislation in the House that could aid such movement -- One bill that would allow restaurants and bars to use outdoor spaces to go beyond their allowed 50% capacity in phase two, and another that would allow outdoor service of alcoholic beverages.

"And I will note ... I have been really impressed. It's been bi-partisan. Across the board, people really want to help their constituents. It's a survival issue," Peterson said.

On the business side, Laut said he is calling his insurance agency to fill in more details on that aspect.

“Typically insurance is based on capacity and therefore we’re still below 100% capacity; but I’m going to have to work out the particulars with the insurance company,” said Laut, who also took part in the meeting this week.

He added, “Everything has to work in concert in order to be able to do this."