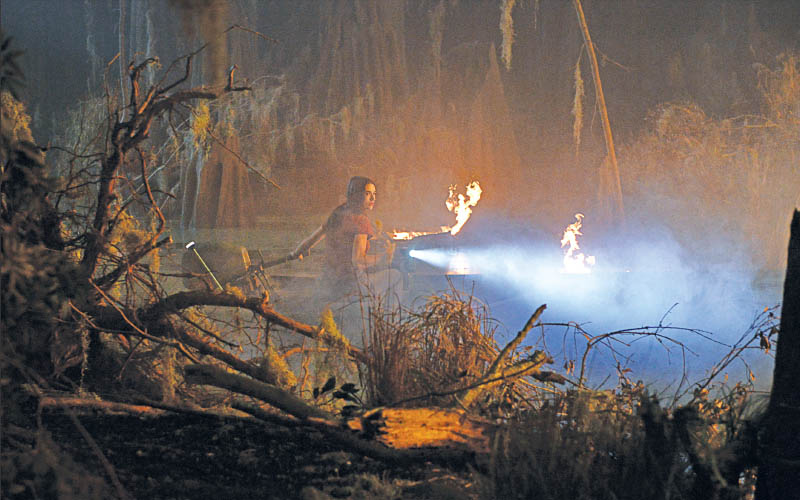 Crew working on DC Universe’s 'Swamp Thing' superhero drama filmed scenes at Greenfield Lake. Those in the local film industry are waiting to see what happens with the state’s production grant funding. (Photo courtesy of Warner Bros.)
Discussions this week aimed at reconciling differences between the North Carolina House and Senate versions of the biennial budget come as the N.C. Film Office and Wilmington Regional Film Commission are wooing several projects.

“There is additional project interest; we have a steady stream of project inquiries for [locations] all over the state,” said Guy Gaster, director of the N.C. Film Office, a unit of the Economic Development Partnership of North Carolina.

Film officials and studios are waiting to see how film incentive allocations for fiscal years 2019-20 and 2020-21 fare in the budget reconciliation process. They are also eyeing two other developments that could influence the near-term future of film in North Carolina.

One is the remnants of HB 2, the so-called “Bathroom Bill,” which were partially but not totally erased by the subsequent passage of House Bill 142 in March 2017. HB 142 nullified the birth-gender-specific bathroom access provisions of HB 2 but continued to prohibit municipalities from enacting anti-discrimination laws that were stronger than those of the state.

While HB2 had a chilling effect on film studios’ desire to bring projects to the state, a few came back after passage of HB 142. But some organizations, such as the ACLU, have kept up pressure on the state legislature to do away with the law entirely.

Thus far, legislators have not reconsidered the matter, but the Winston-Salem Journal reported last week that a new proposed agreement that would settle all the claims in a pending federal lawsuit over HB 142 was filed May 31 in U.S. District Court in the Middle District of North Carolina.

The latest development that could affect North Carolina’s film industry is the passage in Georgia of the so-called “fetal heartbeat” abortion bill. Signed by Georgia Gov. Brian Kemp last month, the bill would deny an abortion after a fetal heartbeat can be detected – which happens usually at five or six weeks.

There’s speculation that opposition to the bill in the film community could harm Georgia’s film industry, which saw 455 projects last year spend about $2.7 billion in the state. After staying mum for a couple of weeks, studio executives and some performers have begun voicing opposition to the strict abortion legislation, some suggesting they could pull projects from the Peach State.

To attract new or even relocated film projects, however, North Carolina must have a consistent incentive package. The state’s incentive now consists of a rebate of up to 25% of qualifying in-state expenditures paid from the Film and Entertainment Grant fund.

The current law mandates that the state earmark $31 million each fiscal year to its grant fund, and that any money left from the previous year roll over to the next. But the budget process has been fraught with confusion this year. Rep. Ted Davis (R-New Hanover), said he has sought to set things right.

“In previous Legislative Sessions, I was successful in lobbying for a recurring annual appropriation of $31 million with no sunset clause for the Film Grant,” Davis wrote in a Facebook post at the end of April.

But that automatic appropriation has been under threat this budget season.

“Because of miscommunication with the State Commerce Department, the chief House Appropriation Chairs were led to believe that there was $67,380,519 of unused funds in the Film Grant Fund, so an additional $31,000,000 was not necessary in the 2019-2020 fiscal year,” Davis wrote in his post. “This resulted in that amount being cut from the proposed Budget for the upcoming fiscal and was to be used for other things.”

What the legislators did not understand, Davis said in an interview this week, is that much of that $67 million was already spoken for. About $35 million is earmarked for projects that have wrapped in the state but have not submitted their accounting, which they must do to receive their grant, referred to as a rebate by the state film office.

It can take months to complete the accounting for film productions, Wilmington Regional Film Commissioner Johnny Griffin explained. He said that locally shot independent film Uncle Frank and 10-part series Swamp Thing, although finished with production, are still tallying up their expenses and figuring out how much in grant-qualifying expenses they spent in North Carolina.

Swamp Thing, which aired the first episode May 31 on DC Universe, a streaming service by Warner Bros. and DC Entertainment, had originally planned to shoot 13 episodes but was capped at 10 episodes after officials decided to put the production on hold. This week, crew members were notified that Swamp Thing was not picked up for a second season.

A grant application form for Swamp Thing, filed with the N.C. Department of Commerce, estimated the production's spending at $65 million in the state, in addition to the about $20 million spent on its pilot. Crew numbers were estimated at 597.

Swamp Thing and Uncle Frank producers are counting on getting their grants out of the $67 million of unused funds, as are other wrapped projects around the state, such as the most recent season of HGTV’s Love It or List It, which filmed in the Raleigh area.

Having money sitting in the grant fund is like having a balance in your checking account but knowing you have some outstanding checks and remaining bills to pay from that balance, Griffin said.

With more than half of that fund balance committed, there still remains about $32 million, but that could be applied for by projects in the pipeline that commit in the coming weeks.

“We have a handful of projects we’re talking to,” Griffin said. “We now have a project that will be shooting soon in Charlotte.”

In some cases, studios wait until casting is complete to decide whether to greenlight a project. Griffin said one production that has shown interest in Wilmington is still trying to resolve creative differences about the show’s story arc, and that is slowing the decision process.

But the fund balance continues to cause confusion in Raleigh, where there have been efforts to transfer money from the grant pool for other uses. The latest version of HB 966, the biennial budget, includes a provision to remove $500,000 from the fund and transfer it to the Department of Commerce. The money would be used to develop a regional partnership to enhance advance manufacturing recruitment efforts in eastern North Carolina.

What Davis terms miscommunication has kept him busy in advocating for the recurring annual appropriation. After the $31 million removed by the House committee was restored and the budget sent to the House floor, an amendment was introduced to remove it again. Davis said he led the effort to defeat that amendment.

The Senate budget, meanwhile, contains no money for the film grant. Davis said that omission is based on the same assumption that there is already more than $67 million sitting idle in the fund. This week, Davis said, he’s going to be conferring with his colleagues in the Senate, explaining why their assumptions are wrong.

The Film and Entertainment Grant Fund “did not have to be a bone of contention, and it was supposed to be recurring,” Davis said.

Rita Harris, legislative aide to Sen. Harper Peterson (D-New Hanover), said that film in North Carolina “is not a Democrat or Republican thing,” but rather an enhancement to the state’s revenues, job offerings and reputation.

While legislators have proposed zeroing out grant funding for one or the other year of the coming biennium, Harris said, she pointed out that HB 966 does lower the amount film projects must spend to qualify for the 25% grant rebate. The qualifying thresholds have been dropped as follows: for feature-length film destined for theaters, from $3 million to $1.5 million; for films for TV, from $1 million to $500,000; for a TV series, from $1 million to $500,000 per episode. The spending threshold for a commercial remains at $250,000.

“They are confident [the prospective law] will be challenged in the courts,” Griffin said, but added that studios’ ultimate decisions will be driven by their stars. “If they refuse to go [to Georgia], the studios will start to rethink.”

Gaster said it’s too early to speculate on whether productions could pull up stakes in Georgia and head north.

But even if no Georgia-bound productions reroute to North Carolina, consistent and clear grant funding could enlarge the pipeline of future projects.

“The [grant] … is creating jobs for locals,” Gaster said. “You don’t have to bring in folks to make up that crew base. From a production standpoint, people [studios] are hiring are sleeping in their own beds. There is some cost savings there. Plus [film locations] are good for tourism.”

As for the lingering effects of anti-transgender legislation and restrictions on municipal anti-discrimination ordinances, the film office director said, “The experience people have here is vastly different from what gets painted as what North Carolina is. Talk to someone who has experienced it: nine times out of 10 it is a positive experience. It’s a matter of breaking down stereotypes.”