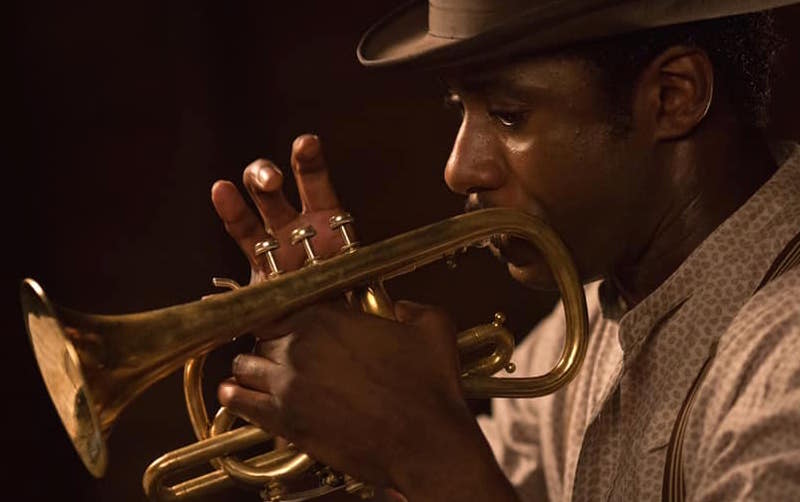 Gary Carr stars as Charles "Buddy" Bolden, a jazz pioneer, in a Wilmington-made film out Friday (Photo courtesy of "Bolden" Facebook page)
Bolden, the film whose on-again, off-again production in Wilmington became something of a local joke, could possibly further burnish Wilmington’s reputation as a filmmaking destination.

“If the project is somewhat successful and people see it and pay attention to it, it is always an example that we can hold up,” Wilmington Regional Film Commissioner Johnny Griffin said Friday. “It could be like Swamp Thing: Once it’s shown, people will see the sets and understand that this is the type of project we can do, the skill level we have here.”

Unlike the TNT series Good Behavior, which shot two seasons in area locations and at EUE Screen Gems Studios in Wilmington, Bolden and DC Universe streaming series Swamp Thing required the design and construction of complex sets. These are sets, according to Griffin, that show off the talent and skill of technical and craftspeople in the Wilmington area.

“It speaks to a whole other level. But first, people have to see it,” he said.

People in the film industry, as well as the general public, just might do that. Bolden hits about 300 screens nationwide Friday, distributed by Abramorama, an independent company whose niche is music-related films.

The almost mythical nature of Charles “Buddy” Bolden himself, who is credited by some for “inventing” jazz but of whom almost nothing concrete is known, combined with writer-director Dan Pritzker’s long, winding path to completing his project, has attracted media attention across the country.

Early on, Pritzker enlisted trumpeter Wynton Marsalis as his musical partner in developing what Pritzker recently described in an interview with Associated Press. “It’s not a biopic,” he said. “It's more of an allegory about the soul of America, in my view."

Marsalis, who composed, arranged and performed the movie’s soundtrack, was interviewed about his part of the project, and about the beginnings of jazz, Thursday for the NPR news show, “All Things Considered.”

Bolden began production in Wilmington in 2007, and has come back for revisions and, most recently, for an entire reshoot with a modified cast. Twice the project rented space at EUE Screen Gems Studios in Wilmington; once, the project had to take up residence at an empty warehouse because the studio space was full, said EUE Screen Gems’ Executive Vice President Bill Vassar.

Pritzker’s unconventional approach to making this film intrigued officials at the established California studios, Griffin said, adding that he and Vassar talked about Bolden when they visited studios on marketing trips.

“They didn’t quite get it. People always want to know what you have shooting in town. If it’s a project with another major studio, you can pick up the phone and call your counterparts there, get information or talk about the capacity of the town where it’s shooting and how much more it can handle.

“Then you have this independent film, which has no studio backing, financing. [The studio executives] figure they don’t know anybody connected with it, and the project probably isn’t using very much in the way of resources.”

But Bolden did use what Griffin terms “massive” amounts of crew and sound stage space. And on subsequent trips back to see clients in California, the studio executives would ask Griffin and Vassar about the project. Studio traditionalists remained incredulous that a project so ambitious would be done without studio support.

It is unclear how much Bolden cost overall or what it could receive in terms of North Carolina film incentives money, according to Griffin. Its three production periods in the state were during three different incentives programs. It also shot in Atlanta and in New Orleans.

“We hope it gets some traction, gets seen,” Griffin said of the film. “Who knows? It could be nominated for Best Production Design.”

Vassar, who saw the film when the producers held a special sneak preview screening in Wilmington a few weeks ago, said it was “absolutely beautiful. The music is exquisite, the sound quality is great, and it’s very powerful.”