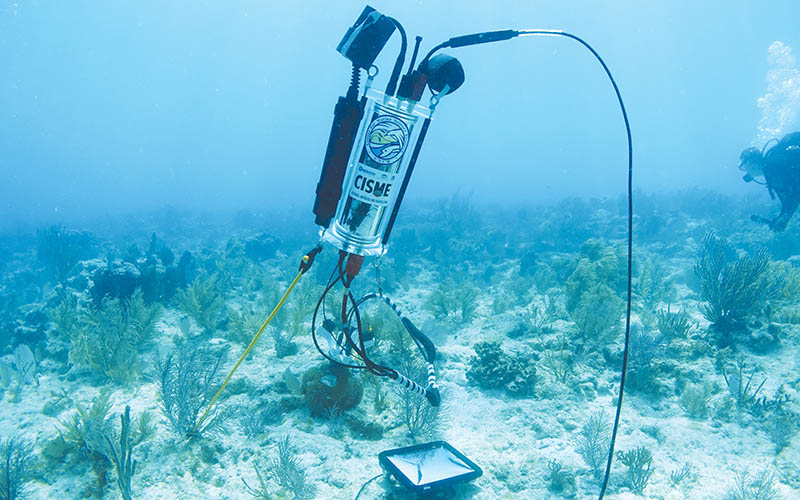 The CISME instrument, used to measure the health of coral reefs without harming it, was developed by NOAA-funded UNCW researchers as part of a research project. (Photo courtesy of CISME)
Two researchers at the University of North Carolina Wilmington have developed an instrument that measures the health of coral reefs, a tool that could be useful for universities, organizations and businesses looking to learn more about the underwater ecosystem.

After 10 years of developing the one-of-a-kind instrument, Alina Szmant, coral reef ecologist and adjunct professor of marine biology at UNCW, and Rob Whitehead, a research specialist at UNCW’s Center for Marine Science, are now looking to commercialize the product.

CISME, which stands for “Community In Situ MEtabolism,” is a diver-portable respirometer used to measure respiration, photosynthesis and calcification rates in corals.

“These are three important vital signs of the coral,” Szmant said. “It’s a tool that was developed in part because the funding agency, National Oceanic and Atmospheric Administration (NOAA) was looking for new and better ways to assess what’s happening to the world’s corals, which about 50% of them had died in the last 34 years.”

Szmant and Whitehead received a research grant from NOAA to develop CISME in 2010.

One of the main features of the instrument is it doesn’t damage the organism it is testing. The instrument’s pronunciation (kiss-me) is a reference to the gentle interaction between the tool and the coral.

“One of the special attributes that we designed into this is not to harm the coral when we’re taking the measurements,” Szmant said. “Imagine if every time they did an electrocardiogram (EKG) on you or took blood pressure, they had to cut a piece of you off. So we wanted a non-invasive, non-destructive tool.” 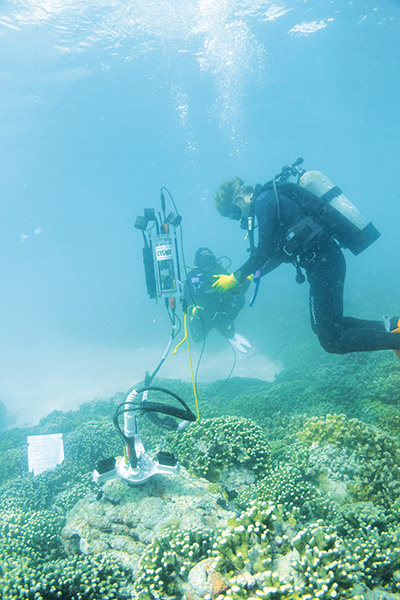 There is no comparable instrument on the market, Szmant said.

“All the coral physiology that’s been done has been done by taking your hammer, chisel or clipper or something else and whacking a piece of the animal off and bringing it back to the lab,” she said.

The only other type of tool that is comparable to CISME, but that has been used experimentally not commercially, is a water respirometer that is left at the bottom of the ocean; however, it still requires cutting off a piece of the coral, Szmant said.

Now that the CISME instrument has been completed to satisfaction, Szmant has had to take off her researcher hat for a startup entrepreneur role.

“We didn’t invent this tool just for us to have it sitting on a shelf. It was developed so that the research community as well as conservationists would have a new tool to research and conserve reef corals,” she said. “Neither of us are businesspeople. We are research scientists, and this is a research project … but now we gotta figure out how to make a business out of this.”

The university licensed CISME to Szmant and Whitehead, and the startup launched in March 2018.

The team has sold one instrument so far to a research institution in China and has the goal of selling 10 by next July.

To understand how to grow the business Szmant, who is now CEO and handles marketing, public relations and customer service for CISME, reached out to UNCW’s Center for Innovation and Entrepreneurship (CIE), where she pitched the company, and the center formed an advisory committee.

“I’ve been getting business training from the CIE, workshops, the mentoring committee, applying for grants, applying for opportunities to present before investors and foundations,” Szmant said. “The six units that we built within UNCW are being loaned out to colleagues for them to use it in projects.”

The CIE advisory committee helped Szmant with writing a proposal for Fish 2.0, an organization that connects seafood businesses with partners and investors and allows companies to go through an assessment process to be designated as Fish 2.0 Qualified.

CISME passed the first round of that assessment and is waiting to hear back about whether it can be part of a Global Innovators Forum in November.

The goal Szmant and Whitehead have for the startup is to attract investors who can provide funding that would allow them to manufacture the instrument to bring costs down, eventually growing it to where it can be acquired.

Currently, the cost of one CISME unit is $26,000, making it challenging to sell.

A researcher who would want one would have to write a grant proposal or ask for his or her institution to provide the money, Szmant said.

“It takes a while for people to get the money to buy them,” she said. “So it’s one of these waiting games right now. I have my fingers crossed that we did a good enough job to get to Fish 2.0 [Qualified]. It will put us before not just VC but also foundations.”

Right now, Szmant is focusing on getting the word out about CISME.

“It’s not like this is just another fish trap or mousetrap or toaster. It’s like the very first toaster that anybody ever invented,” she said. “So you’ve got to get people to know that they even need it.”

Szmant hopes to design more applications for CISME so it can be used to measure other organisms, which she says would add expandability and versatility – two important attributes for any instrument.

“Our goal is for this instrument to be recognized for the value it can contribute to coral reef science,” Szmant said. “I’m the core biologist, and Rob is more of a chemist and tinkerer. We have complementary skills. Now we’re trying to gain business skills, it’s a whole different world out there.”