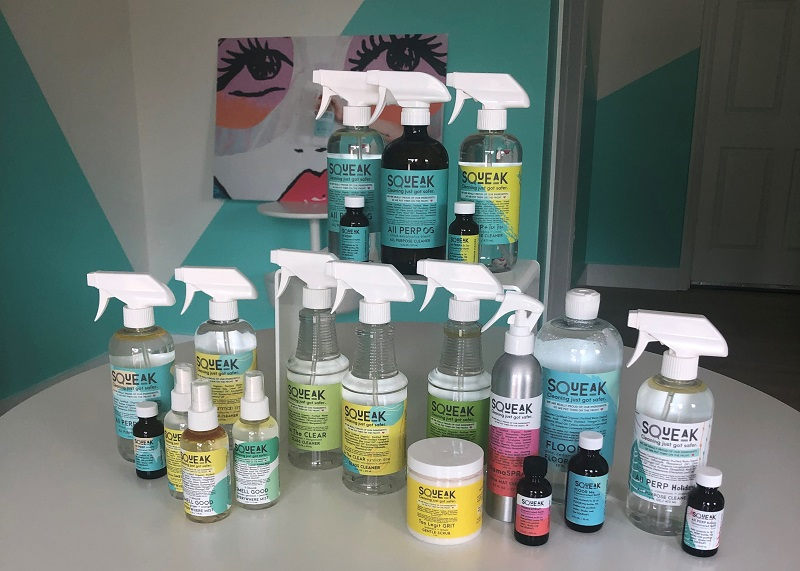 SQUEAK will house a retail space inside its new Dutch Square operation when work is complete. The company plans to open the new facility in August. (Photo courtesy of SQUEAK)
Wilmington-based SQUEAK, a business that makes natural and organic cleaning products, is moving into the Dutch Square Industrial Park.

Founder and owner Jayna Crittenden plans to move the business from inside the basement of her home and scaling it into the company’s new 1,300-square-foot location at 6700 Netherlands Drive, Unit D, Crittenden said Tuesday.

The company plans to open the spot, which will hold its office, retail, warehouse and manufacturing operation, in August.

Know Better, Do Better Inc., doing business as SQUEAK, is a manufacturer and retailer of natural and organic cleaning products, including all-purpose, glass, floor and yoga mat cleaners, as well as an everywhere mist, Crittenden said.

What started as a blog and videos Crittenden did to promote making your own natural cleaning products ended up becoming a full-time business for Crittenden, who launched the company in April 2018.

Crittenden launched her products as a “clean” alternative to some of the name-brand cleaners sold in stores. Her frustration with the ingredients in traditional cleaning products led to her passion for education and making her own natural cleaners.

SQUEAK will also revamp its website, to include a section that will house educational links and other information about safer cleaning, she said. The education piece is also promoted through its social media platforms, Facebook and Instagram.

Crittenden, her husband, and three part-time employees run the operation. The company has grown from a website and some local customers to now securing space on the shelves, or in the online stores, of 32 businesses, she said. Of those businesses, some SQUEAK products can be purchased at 20 Earth Fare stores in North Carolina and South Carolina, including the Wilmington location, and Tidal Creek Co-op.

The move into Dutch Square is all in preparation to scale the business, she said. Crittenden is anticipating more demand for SQUEAK products as the company works to increase its market presence, Crittenden said.

SQUEAK is investing close to $40,000 in upfitting its new space, including its machinery, Crittenden said.

This comes as SQUEAK works to roll out its products on Amazon, and get into Whole Foods Market.

“Now our next goal is to really increase. So we are working with a couple groups now, one who is working to get our Amazon existence really up and running,” Crittenden said.

Along with Amazon and Whole Foods, the company also has another longer-term goal to get SQUEAK products on the shelves at Target stores, she said.

Their public grand opening for the Dutch Square space is expected to be held in late August, she said.

"We're really excited to have the opportunity to get more involved with the community with a little bit of a retail space and to increase our volume capacity to be able to service larger retailers with safe and organic cleaning products," Crittenden said.