Hamilton Looks To Redefine The Entrepreneur 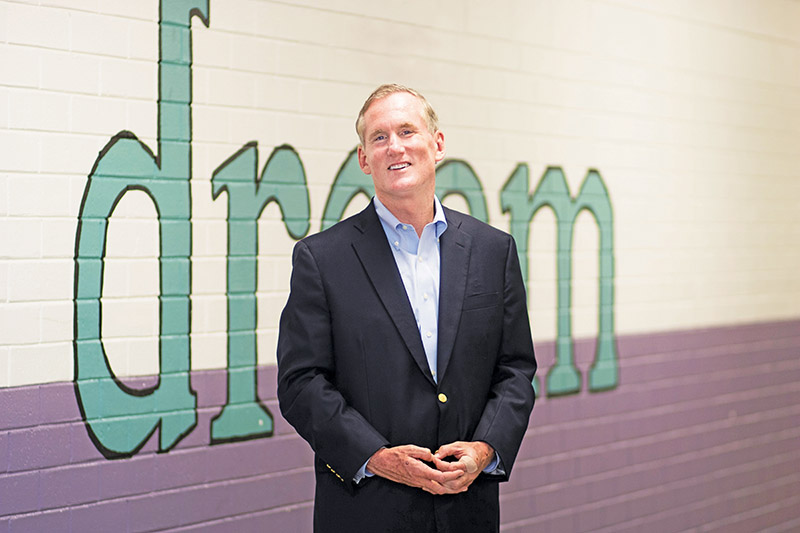 Brian Hamilton, who recently started the Brian Hamilton Foundation, visited area schools in April including D.C. Virgo Preparatory Academy, where he talked to students about becoming entrepreneurs. Photo by Terah Wilson
To be an entrepreneur you don’t have to be a young graduate of a top university who invents a new technology and is willing to risk everything to start a company. Entrepreneurship can be for single parents, working-class people, inmates and even kids. Entrepreneurship can be for all. That is the message Brian Hamilton wants to spread in Wilmington, the state and everywhere else.

Hamilton was the co-founder and CEO of Sageworks, a Raleigh-based fintech company that provides financial software and information to financial institutions. The company was sold in 2018 to a California private equity firm.

Hamilton, a part-time Wrightsville Beach resident, started the Brian Hamilton Foundation shortly after the acquisition of Sageworks. The foundation provides resources and support for those interested in starting their own business.

Hamilton’s venture into entrepreneurship started at a young age.

“I started businesses when I was really young, like 9 or 10 years old. I was doing businesses making money off that. That’s kind of how I became an entrepreneur,” Hamilton said during a recent visit to Wilmington that included talks with local groups and students.

“I think I probably started just cutting and fertilizing lawns,” he said.

Hamilton was born in Bridgeport, Connecticut, and graduated from Sacred Heart University. He then went to Duke University where he received his MBA from the Fuqua School of Business.

Hamilton partnered with Sarah Tourville to start Sageworks in 1998. It took time to develop into a profitable company.

“Sageworks was not right away successful. We grew, but we really didn’t have our business model down for the first 10 years and it was a lot of trial and error,” Hamilton said. “I would say 99% of our value we accrued in the last eight to 10 years of the business. There was a lot of struggle for the first 10 years. It wasn’t a picnic right off the bat. Everybody thinks tech companies sort of just either die or fly really fast, but it’s not true. Not with us anyway.”

While the Brian Hamilton Foundation is new, its beginnings started in 1992 when Hamilton and the Rev. Robert Harris started Inmates to Entrepreneurs, now part of the foundation.

“The foundation is just an escalation of what Inmates to Entrepreneurs does, which is to help people start their own businesses. It’s really that simple,” Hamilton said.

The Inmates to Entrepreneurs program provides a free eight-week course, online classes, correctional facility workshops and resources for people with a criminal background.

Inmates to Entrepreneur’s in-person, eight-week course is offered through the state and started in Wilmington last year. There were 24 students in that first Wilmington class who were connected with mentors.

One new addition to the foundation’s youth entrepreneurship initiative is the Hamilton Challenge, a seven-day program in which the foundation, teachers and schools partner to teach students about how to be an entrepreneur, and students can brainstorm ideas to start their own low-capital service business.

This month, Hamilton visited D.C. Virgo Preparatory Academy, a K-8 public year-round school run in partnership with the University of North Carolina Wilmington that was the pilot for the Hamilton Challenge.

It is important for students to start learning about entrepreneurship at a young age, Hamilton said.

“Sometimes people say, ‘You’re a really risk-seeking guy and entrepreneurial,’ and I’m like ‘Not really.’ I just started so young at this that being an entrepreneur is easy now,” he said. “It’s something I know. So I want to get the kids started early so that they can have that same journey, and it takes the risk out of it.”

The foundation also recently launched Starter U, a free, self-paced online course with 12 hours of instruction that covers business ideation, marketing, selling and customer service. The course is also available as a phone app.

Hamilton’s decision to change paths from running a business to devoting more of his time to philanthropy stemmed from his desire to teach others and share his belief that entrepreneurship can be taught and can be a viable way for underprivileged people to make a living, he said.

“In the United States, there are largely two ways to get out of poverty. The first way is through education. That’s why people stress education so much. But the paradox is that most poor folks don’t get educated. That’s just a reality,” Hamilton said. “So we focus on the second thing, which is through entrepreneurism. The other way that you rise in our society historically over the last 200 years is by starting your own business and I think that idea has been lost.”

Hamilton hopes to teach people, who think they can’t be entrepreneurs, that there is more than one way to start and grow a business.

“Being an entrepreneur, everyone thinks it’s like diving in this lava pit. That’s not true, you don’t have to do it that way. I don’t think I ever just gave up everything and went for one thing,” Hamilton said. “You could start part time or at home, and you get to learn about business along the way.”