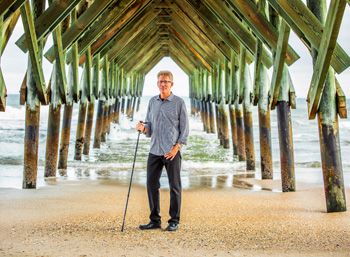 The annual five-day conference, founded in 2015, is one of several branches under the Cucalorus Festival name, along with Cucalorus Film and Cucalorus Stage, new to the festival’s programming this year. Cucalorus Connect 2017 will take place in November on Cape Fear Community College’s downtown campus at its Union Station building on Front Street.

Dan Brawley, executive director of the annual Cucalorus Festival, said this is the first year an official board has formed for Connect.

The Cucalorus Connect Executive Board formed in April and is made up of more than 20 men and woman representing various businesses, organizations and industries in the Wilmington and surrounding areas.

The executive board will help determine programming of the November conference and take the conference to the next level, Brawley said.

Steve Bon, Connect executive board member and president of Bon's Eye Marketing, was the host of the board's first meeting back in April. Brawley credits Bon for the "behind the scenes" work in forming the new executive board.

Bon said the group continues to diversify and could add additional board members to the list.

“The goal is to get a broad representation of our business/creative community,” Bon said. “We're excited about the evolution ahead for Connect."

In mid-May, the Connect executive board also named its president, Tom Looney.

“There is a potential wealth of resources in the community that haven’t been fully activated. Tom Looney is a great example of that. He has incredible global experience, as an entrepreneur and leader,” Brawley said. “We’re so excited to have somebody with his background and depth of experience to lead the Connect board and to really drive and shape the future of Cucalorus Connect.”

As the board works to set the future of Connect, Wilmington's future is being eyed as the focus of the Cucalorus Connect conference this year.

Looney, who has decades of experience in the tech industry and has worked with the likes of Steve Jobs, wants Cucalorus Connect 2017 to be "the catalyst for setting the Wilmington’s now and next economy on a course to the future,” he said.

"Connect 2017 sits at intersection of the creative and knowledge sectors, with the innovation and digital industrial sectors, and will showcase all that is defining and transforming the U.S. and global economy as we quickly approach 2020," Looney said.

One aspect Looney would like to feature is a multi-person session or track portion that focuses on "Connecting Human Capital: Recruiting."

"We have some incredibly successful recruiting companies based here in Wilmington, with expertise in multiple industries and professions, serving the human capital attraction of companies and institutions across the nation and around the world," Looney said. "So we'll hear from them about the way their profession has evolved, and how talent and opportunities connect in the now and next economy."

Looney said the board is also gearing up programing that could feature "Connect in the Innovation Sector" and "Connect in the Digital Industrial Sector" as two areas of focus for Cucalorus Connect 2017 tracks and sessions.

But programming, events and keynotes continue to develop for the November festival.

“We’re going to do some neat stuff ... We’re going to celebrate where we’ve been, where we are today and where we are going,” Looney said. “I want Connect 2017 to be a must-go, must-attend event to both share, teach and learn. No matter who you are in Wilmington.”

As of May, Cucalorus Connect Executive Board members are: Editor's note: This story reflects a correction to Laura Brogdon-Primavera's name.