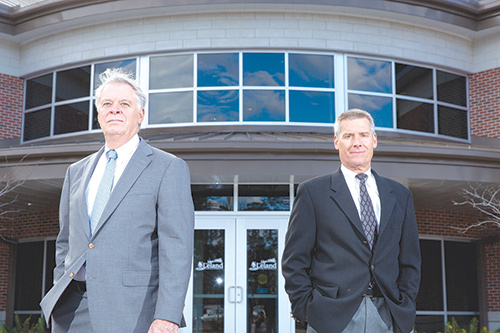 Daniel Baden, with MARBIONC, (left) and Gary Vidmar, with the town of Leland, are co-chairs of the InnovateSENC project. (Photo by Chris Brehmer)
After a year of intensive behind-the-scenes work, officials with Innovate Southeast North Carolina (SENC) say their initiative is ready for prime time.

“Our focus is on marine and life sciences – building an economic cluster here,” said Jennifer Rigby, strategic and policy coordinator for New Hanover County who serves as the InnovateSENC meeting coordinator.

She characterized the initiative’s first year as one of getting partners together, making connections and developing “actionable and measurable” goals.

Wilmington’s participation in the five-metro InnovateNC: A Cross-City Learning Collaborative, was announced in September 2015.

The two-year economic development project, supported by $250,000 worth of in-kind services from the Institute for Emerging Issues at N.C. State University, is designed to spur innovation culture more broadly within the state, so communities that already have a framework in place can build their capacity to promote and support innovation, according to the institute.

Teams from each city visit the other four participating cities as part of the InnovateNC project.
InnovateSENC is led by the Wilmington Innovation Council, whose 20-plus members represent area governments, educational institutions, technology businesses and entrepreneurial companies. Rigby said the local project is getting traction. Innovate SENC tested out its tread at the Cucalorus Connect conference in November.

That presentation highlighted the initiative’s strategic plan and goals and featured one of the startups it is working with: SAROS, a desalination system that uses wave energy to turn ocean water into drinking water. The presentation was filmed and shown on UNC-TV, and exists as a YouTube video that has attracted attention, according to Daniel Baden, executive principal at University of North Carolina Wilmington’s MARBIONC.

Another startup on Innovate- SENC’s radar is CISME, which stands for Coral In Situ Metabolism. It’s the project of Alina Szmant, a coral reef ecologist and former UNCW professor of marine biology, and her colleague, Rob Whitehead, a research specialist at the UNCW Center for Marine Science. They have been working to develop an instrument that can measure the health of coral without damaging the reef.

“Coral reefs are dying immensely,” Vidmar said, explaining that the new instrument is designed to be attached to a coral reef by a diver, allowing scientists to monitor the coral’s health status remotely in real time via computer. SAROS and CISME are some examples of the kind of ventures InnovateSENC wants to nurture through an expanding network to connect startups to sources of talent, capital and customers.

“We’re beginning to make the connections we wanted to make,” Vidmar continued, echoing Baden’s view that the InnovateSENC team has done “some really good work in the last year or so.”

Earlier this month, the team at InnovateSENC was buoyed by the news of a $250 million project, in which UNCW is a partner, designed to support development of new biopharmaceuticals.

At the center of this effort is the newly formed National Institute for Innovation in Manufacturing Biopharmaceuticals (NIIMBL), based at the University of Delaware. NIIMBL will enlist the efforts of UNCW as part of a network of more than 150 companies, educational institutions, nonprofit organizations and government entities.

The kind of research and entrepreneurial activity NIIMBL aims to spur through its partners aligns with InnovateSENC’s ultimate mission, which is “to create jobs – good paying jobs,” according to Rigby.

Startups themselves can also create opportunities for other companies in the area. Vidmar pointed out that both SAROS and CISME are eyeing fabrication opportunities with Leland- based Manufacturing Methods.

David Ott, CFO and vice president of sales and administration for Manufacturing Methods, confirmed that SAROS is talking with his company about building the wave energy buoys in its Leland plant. Manufacturing Methods is also quoting the cost of fabricating several parts for CISME’s coral probe.

As an example of the network InnovateSENC is building, Manufacturing Methods has hired Wilmington Innovation Council member Bruce Mancinelli as a business development consultant. Mancinelli, who forged a career in the technology industry before retiring to Brunswick County, is also involved with the development of Brunswick Community College’s new incubator space.

Thanks in part to the expanding network, word about InnovateSENC is getting out, said Steve Bon. Bon’s agency, Bon’s Eye Marketing, has created a website and logo for the initiative, and he recently forwarded several web inquiries to Vidmar for follow up.

Diane Durance, who arrived in Wilmington last June as the new director of UNCW’s Center for Innovation and Entrepreneurship (CIE), said it was exciting to walk into a situation in which a broad swath of entities were collaborating to create an entrepreneurial, innovative community.

“I didn’t have to live through the initial development,” she laughed. “They already had [talked about] their goals and economic impact, their mission. For our community, it is a fabulous public/private/government effort. It should work like a well-oiled machine.

“Now, it goes way beyond attracting new business,” she said of the effort. “It’s also about developing businesses that are here and starting new business, using the natural assets in the location. And here, that is marine and marine biotechnology resources.”

InnovateSENC’s two-year project period ends in September, but its council members hope that by that time the initiative will be well in motion, working with NIIMBL-related activities and connecting high-tech and life sciences startups to resources that will get them up and running.

“We need to keep making connections,” Rigby said. “I feel there is going to be a pinnacle resulting in this wonderful thing. We do have so many assets in our community; we need to leverage them, to use what we have to maximize our potential.”