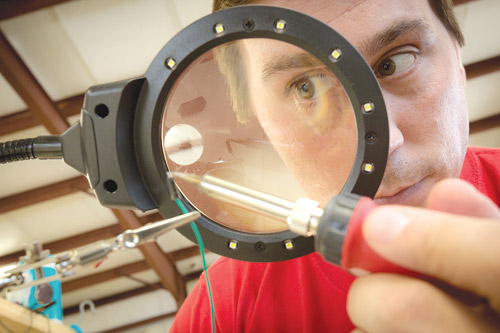 More than Shop 2.0, the new facility provides entrepreneurs and inventors with an opportunity to share ideas, access cutting-edge tools, develop prototypes and get introduced to manufacturing, marketing and intellectual property experts as they bring their dreams to market.

Andrew Williams, Elite’s CEO, aims to improve the odds of success for his clients by giving them the advice and equipment they need to craft, launch and sell a better product.

Housed in a 6,000-square-foot space on South 18th Street, Elite charges a monthly membership fee of $25 for individual inventors and $50 for teams and small businesses. Once inside, they’re given access to 3-D printing, metal fabrication, vinyl cutting, soldering and other equipment to build their creations, with Williams alongside to offer advice, tweak prototypes and – as projects progress – open doors to manufacturers, distributors and attorneys.

To date, about 50 people have signed up as members, and Elite generally has at least 20 projects
open at any given time.

Van Jackson Sr., a local contractor, has spent months perfecting a truck-bed extender that will haul lengthy equipment to work sites without having it drop to the ground.

“Everyone that has seen it likes it and wants one,” said Jackson, who is working with Williams on manufacturing and marketing and expects to begin selling his product in late summer.

Williams is also consulting with Charles Hawley, a retiree who conceived an air-powered driver to enable builders to thread hex nuts more quickly.

It was his service in Afghanistan that prompted Williams and a friend to design TacLace, a “pull, cinch and wrap” boot-lacing system now sold in every Navy and Marine Corps Exchange.

He’s also collaborated with inventor Clay Skelton on OrigoSafe, the first contract product at Elite. An ignition interlock system prohibits texting while driving by locking up a driver’s phone in a docking station so it can’t be held or viewed, a safety measure attractive to commercial fleet owners and the parents of teens.

“The TacLaces and the Origos of the world more than keep us afloat,” said Williams, who also offers CAD and quadcopter-building workshops to round out revenue.

With business taking flight, Williams plans to bring several existing contractors in as employees over the next several months to maintain the company’s momentum.

“They provide a unique opportunity in the community that’s not been replicated,” said Roger Johnson, assistant to the city manager for development. “It’s a very collaborative atmosphere.”