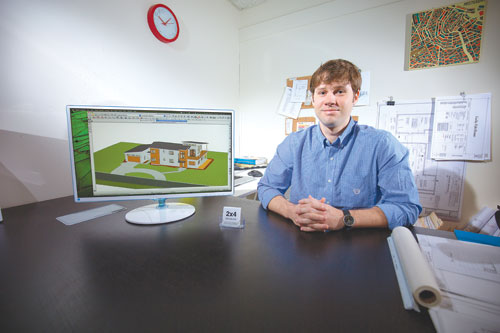 Cory Thompson combines an interest in computer modeling and residential design to run his company, 2x4 DESIGNS, which can put together 3-D models for clients' building plans. (Photo by Chris Brehmer)
Among Wilmington’s community of residential designers, Cory Thompson might be called a high-tech chip off the old block.

Thompson, 30, who in January opened 2x4 DESIGNS at The Cotton Exchange, brings a blend of millennial verve and down-home sensibility to his work as he creates both trendy and traditional homes.

Raised on a cattle farm in the Montgomery County hamlet of Mount Gilead, Thompson helped his father build sheds and fix the tractor. After high school, he worked construction jobs.

“After six months of construction labor I realized I was on the wrong side of the industry,” the boyish-looking Thompson recalled, flanked by a 3-D display screen and technical manuals in his new downtown office. “I was more interested in the professional, creative side of construction and design.”

So Thompson pulled up stakes and moved to Wilmington, where he studied architectural technology at Cape Fear Community College.

Landing a job with Bowman Murray Hemingway Architects (BMH) in 2007, he started as a draftsman on commercial projects but found that it was the occasional residential project that interested him most.

“He was doing as much as he could for as little as he could,” the young designer remembers. “The contractor got burned worse than I did … I took it as a good learning lesson.”

Then BMH laid off Thompson as the recession deepened. When he was rehired eight months later, he concluded that he’d need to be a licensed architect to advance at the firm. So with no interest in leaving town and going back to the classroom, Thompson left BMH in January 2014.

While scouting a permanent location for his business, Thompson’s father approached him about designing a distribution center for the antibiotic- and hormone-free beef, pork and lamb produced on the family’s 500-acre farm.

Using his computer-aided design program, the younger Thompson stayed in Wilmington and created a two-story barn-like structure for his dad.

“He could give you that 3-D view on your computer … that was amazing,” Dale Thompson said. “Cory took it to a different level.”

Currently, there are between one and two dozen residential designers not licensed as architects who do steady business across the Lower Cape Fear, said James Dalrymple, a fellow designer in Leland who is acting vice president of the state chapter of the American Institute of Building Design.

Demand by retirees is driving much of the area’s new home construction, Cory Thompson said.

“That style is typically more traditional … not extremely large homes” and provides a business opportunity that is “steady if not growing,” he added.

But while his work is rooted in the traditional, he’s constantly on the lookout for homebuyers who are willing to push the envelope.

Such was the case when Elise Parck and Martin Pollack decided to test his skills.

“We reviewed his video and gave him a call right away,” said Parck, a native of Sweden. So Thompson drove out to the couple’s site on Lucky Fish Lane off Middle Sound Loop Road to see what they had in mind.

Pollack sketched out the beginnings of a two-story home with an open floor plan encompassing living, dining and kitchen space; four bedrooms, three full baths and two half-baths; two offices; and an entertainment lounge, playroom and second-story deck: 3,800-square-feet in all, overlooking a creek.

“We have a constant stream of visitors,” Pollack said, explaining that his wife’s family from overseas visits them for weeks at a time.

Guiding Thompson on the look and feel they wanted, Parck showed him pictures of her old neighborhood back home.

But there was more. The couple subscribes to certain aspects of Maharishi Vastu Architecture, a form of natural wellness popular in India, so they directed Thompson to ensure that their bedroom was properly aligned and that they would be able to sleep with their heads pointing south or east.

Thompson’s creative juices were flowing. He highlighted the site’s best features while respecting the couple’s wishes.

“I tried to make the building react to the site with sun … and tried to capture scenic views too,” he said, calling the assignment “probably the most interesting project I ever worked on.”

“We walked away with a design that we felt would be our perfect dream house for the future,” Pollack said. “Our builder already referred a second customer to him.”

The couple is breaking ground this spring.

Up the road, Thompson is busy designing a Mediterranean-style home on Beaufort’s waterfront.

He also finds time for pro bono work. Thompson created the floor plan for the first of what is hoped to be several new one-family homes being promoted by Step Up For Soldiers, a Wilmington nonprofit that will rent them to veterans attending college.

Off-hours, Thompson reunites with his family whenever they roll into town towing a trailer of grass-fed beef, delivering it to dozens of customers who gather at a lot on Market Street every few weeks.

“A lot of these people invite us to their house on Saturday night,” Dale Thompson said, giving Cory, his brother and parents the opportunity to come together and enjoy country hospitality, Cape Fear-style.