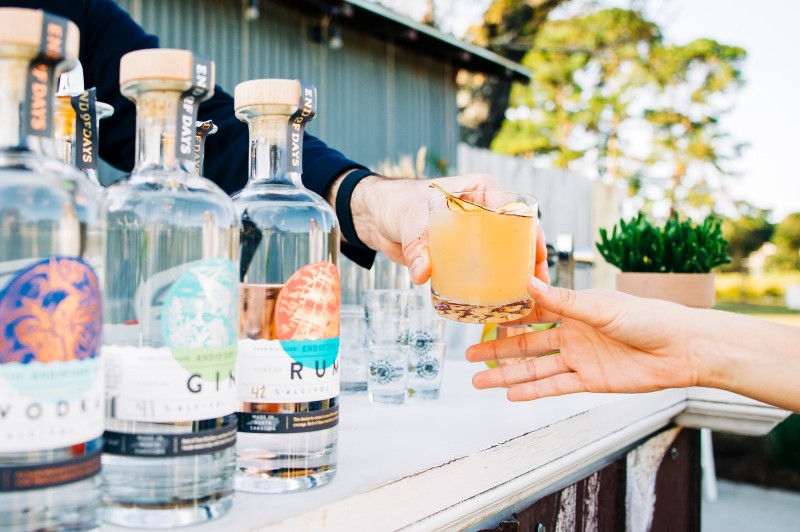 End of Days Distillery is adding an on-site commercial kitchen to its property. (Photo courtesy of Matt Ray Photography)
Shane and Beth Faulkner, owners of End of Days Distillery, regularly host events in conjunction with local food trucks and restaurants at the distillery, and have found the need for an on-site commercial kitchen to help with these events.

“We have a small kitchen that is designed to support our cocktail program,” Shane Faulkner said. “But we’ve found that it’s not large enough to allow us to do the kinds of events we want to be able to do going forward.”

The Faulkners have been granted approval by the city of Wilmington for a versatile concept kitchen that will be housed in a 20-foot shipping container next to their building at 1815 Castle St.

The idea is to allow people within the community to use the concept kitchen to host events in conjunction with the distillery, as well as to try out new business concepts and serve End of Days customers.

According to the Faulkners, it will be an ideal space for those who don’t need a full kitchen on a regular basis, but perhaps just a few hours each week. The kitchen will have the amenities of a commercial kitchen and be available for reservation whenever the distillery is not using it for an event of its own.

“This really came out of necessity,” Shane Faulkner said. “We’ve been doing a lot of pop-up dinners with restaurants such as True Blue Butcher & Table and Floriana’s, but there are a lot of restrictions on how those events have to be executed.

"Having a commercial kitchen on site that is regularly inspected will really allow us to expand our offerings. It gives us so many options that it will always be an asset.”

Shane Faulkner also noted that having a fully functional kitchen not only benefits the distillery, but the community as well.

“We’re an innovative company, always looking for fresh ideas, and we want to help out the guys who have a unique take on something they want to bring to Wilmington,” he said.

The Faulkners plan to create cafe seating on top of the container to increase their outdoor seating capacity, and hope to have the kitchen up and running in about three months.

In the meantime, the distillery is hosting live music three to four times a week and has also partnered with True Blue Butcher & Table for the Dinner and a Show Series at the Brooklyn Arts Center.

There are currently two concert series on the books for March and April, each of which includes a three-course meal designed by True Blue’s chef, Bobby Zimmerman. Full details can be found online.