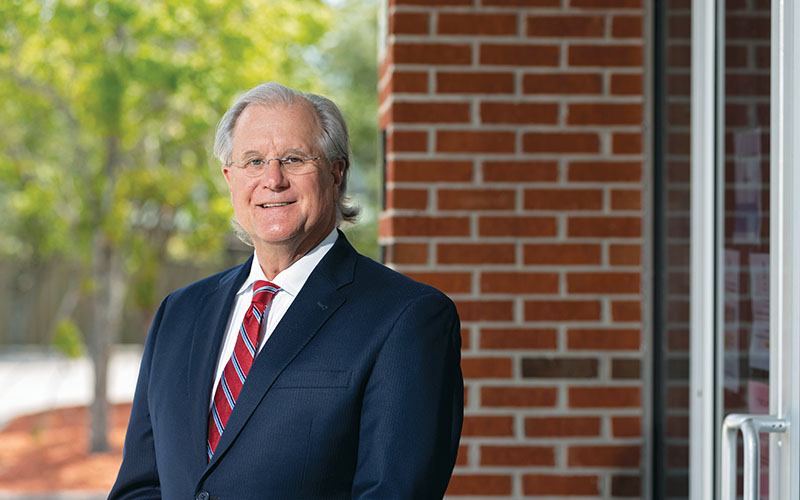 Del Burns, interim superintendent of New Hanover County Schools, considers himself to be working on a roadmap that will help the system’s new superintendent hit the ground running. (Photo by Michael Cline Spencer)
The Special Olympics helped lead Del Burns to entering the field of education in 1976.

“I had an interest in the Special Olympics because I had a family member who had a developmental disability,” explained Burns, who is serving as interim superintendent of New Hanover County Schools. “As I was going through college, I happened to take a course in education and it really struck me; from there I decided, ‘Yes, this is work I’d be interested in doing,’ and got engaged in the curriculum.

"I got a master’s degree in special education, began teaching and have thoroughly enjoyed every job I’ve had in public schools.”

Burns was tapped as interim superintendent of NHCS in February, following the resignation of Tim Markley, who had served in the role since 2010. Burns assumed his new role March 2, jumping into a whirlwind of major issues. One of the most pressing ended up being the school district’s response to the coronavirus pandemic and steps taken to slow the spread of the highly contagious COVID-19.

That’s only one of the concerns he’s been addressing, but he’s used to having more than one hurdle to overcome.

“I do find it gratifying,” he said of his interim role. “I think it’s important to do the work necessary to prepare any district for a new superintendent. Transitions are always hard for school systems. You’ve got the reasons for change. There are opportunities to look at needs for improvement and make some of those changes and also provide recommendations to the board so that when the subsequent superintendent, the successor superintendent, comes in, that there is a bit of a roadmap for them.”

That roadmap saves time, Burns said, and one of the key components Burns was tasked by the Board of Education with working on was the handling of misconduct or inappropriate behavior allegations, including those of a sexual nature, on the part of students or employees.

“They were frank about that being the most important thing for me initially, to review the processes, look at the structure and determine how it can be improved,” Burns said.

In the midst of those efforts came COVID-19 and the order to close schools, but the work on the complaint and allegation process has also continued.

“I have recommended to the board that at some point in the future, perhaps six months from now ... there needs to be a review and analysis of the system, of the workflow and the processes to ensure that there are no holes, and if there are any, they are addressed,” he said. “My feeling is that the key players are dedicated, and they want to have a strong system; they’re going to make it work and they’re going to make it right.”

When Burns was hired for the interim post, Deputy Superintendent LaChawn Smith stated in an announcement that Burns’s “depth of experience and success across North Carolina will help us as we evaluate our current policies, implement new procedures and initiatives, and work to ensure our students have a safe learning environment and our community is informed of our progress.”

COVID-19’s impact on education has been profound.

“We had to respond very quickly when the first order from [Gov. Roy Cooper] came to stay at home,” Burns said. “The district had to put in place a number of restrictions; we had to implement remote work and remote learning. ... We had to prepare devices and deploy them. And we had to train and support teachers. That took a lot of planning. It took a lot of effort.”

Early on, the schools began providing meals for students.

“We’ve now increased that to the point we have 20 schools that are serving meals every day. We have over 20 buses that are involved in approximately 50 bus stops in neighborhoods delivering meals.”

Connecting with students remains a challenge.

“Teachers are doing phenomenal work, inspirational work, to maintain contact, to support students, to help them so that they can work through this,” Burns said.

He said this time of school being closed “is very hard on families, especially families where one or both parents are working as well as trying to support their children. We’re real clear that the most important thing is the social and emotional well-being of children.”

How does the coronavirus pandemic compare to other problems Burns has confronted?

This one, he said, “is of longer duration and greater intensity combined.”

But “it strengthens organizations and individuals,” Burns said, “when you have to deal with a very challenging event.”