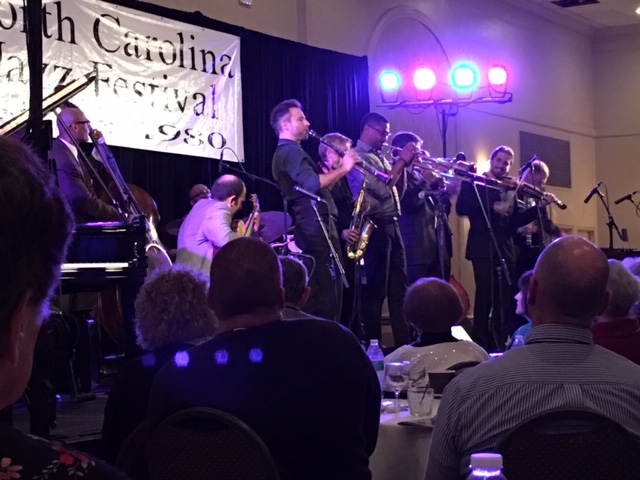 Musicians entertain the crowd at a previous N.C. Jazz Festival. Next year's event has already been postponed to 2022. (Photo by Neil Cotiaux))

Call it the 41st North Carolina Jazz Festival, not the 41st “annual” festival.

Initially scheduled for Feb. 4-6, 2021 in Wilmington at the Hotel Ballast, the next N.C. Jazz Festival has been moved to the first week of February in 2022.

This coming year, the event was expected to again attract hundreds of jazz aficionados from across the state and country who each year cram the hotel’s ballroom and enjoy a Thursday night showcase of spotlighted artists followed by a free-wheeling jam session. Friday and Saturday nights were to feature 13 “All-Star” musicians in seven sets of six or seven players.

Over the decades, the festival’s popularity has helped put downtown Wilmington on the map with some outsiders while also injecting tourist dollars into the local economy.

Sandy Evans, the festival’s president, said the decision not to proceed with the 2021 event was made for both public safety and financial reasons.

“We have said all along that we will be guided by what the governor says as far as indoor events,” said Evans, referring to ongoing restrictions by the state aimed at controlling the spread of the novel coronavirus. “But there is no way that they’re going to say it’s OK to have 500 people crowded in that ballroom … I wouldn’t put the attendees' or the musicians’ health at risk.”

Many of the festival’s patrons are over 60 years old and some fly in from different parts of the country, Evans said. “Therefore, I would not want to put them at risk and I think a lot of them just wouldn’t fly.”

While there is still a chance that state officials could tell the festival’s organizers to proceed as planned next February, with an event drawing hundreds of people “it’s just not going to happen,” Evans said. “And if he (the governor) even says you can have 200 people, we couldn’t afford to do it … if we, instead of selling 500 tickets sold 200, we couldn’t afford to hire all those musicians and we do hire the best.”

Anyone who has already purchased a ticket or a table for the 2021 event will receive a full refund or they can choose to roll over their purchase and apply it to the 2022 festival, Evans said.

The make-good event will be held Thursday-Saturday, Feb. 3-5, 2022 and will feature a tribute to 65 years of Jazz Samba in the United States. Every musician who was to appear this coming February is currently scheduled to appear at the make-good event.

“We are going to be so excited to be back on that stage,” Evans said.