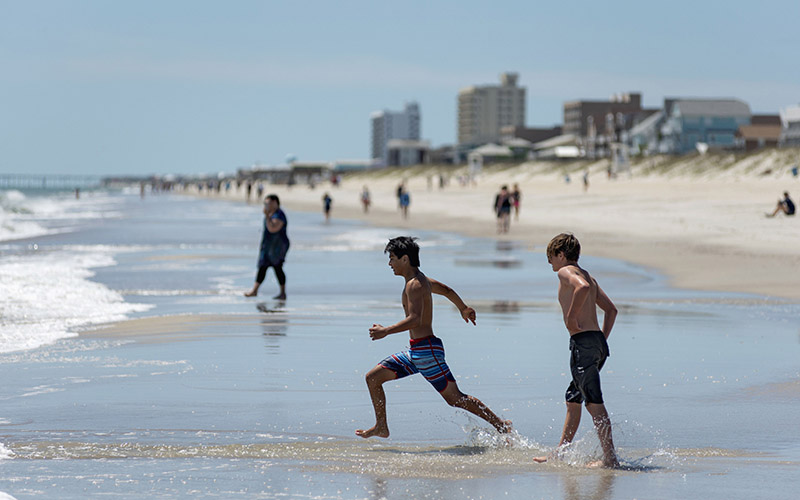 Local beaches, including Carolina Beach, began opening for exercise only at the end of April and then more during May.
Wilmington business owner Jason Morgan decided he just couldn’t wait.

He reopened his gym, Muscleworx Fitness on Carolina Beach Road, on April 30, despite the ongoing coronavirus pandemic and an order from Gov. Roy Cooper that extended restrictions on close-contact establishments to beyond that date.

“If I don’t open, my business is going to die,” said Morgan, who hasn’t received any relief loans or the SBA’s Paycheck Protection Plan. “I’ve spent 25 years building this business. This is basically what I’ve done my entire life. And what else am I supposed to do?”

Morgan isn’t alone. Many businesses face an uncertain future, even with a broader reopening of the local economy getting closer to reality. What that reopening will look like is also not set in stone, although a phased approach is spelled out in the latest executive order from the governor.

Locally, the relaxing of some restrictions took place near the end of April. For example, New Hanover County beaches reopened to exercise only. But that didn’t mean all tourists could enjoy them – lodging bans remained in place in some areas until at least May 8. New Hanover County, however, lifted its restriction April 29 on hotels, motels and short-term rentals in the unincorporated parts of the county.

“Obviously, we would like for things to reopen as soon as possible, but we also want to do it in a very responsible way,” said Wilmington Mayor Bill Saffo, “taking into consideration that our most important concern is that the health of the community is not compromised and that whatever decision we make ... that we do it through the lens of public health, with their blessing and with their advice.” 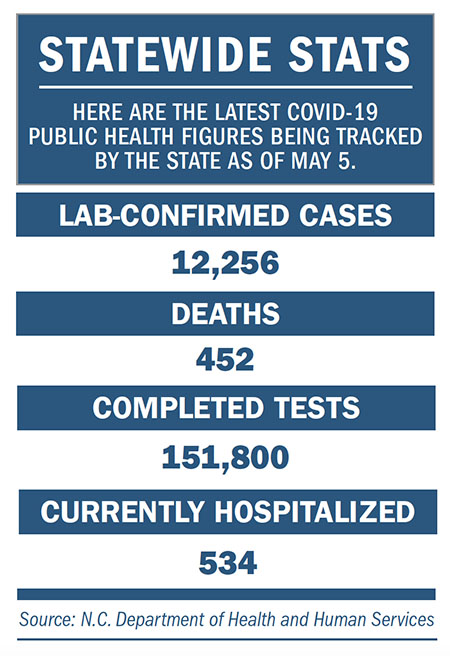 “We’re going to be leaning heavily on what the governor tells us,” Saffo said, which includes metrics such as testing and trends. “That will play a very significant role at least from the city’s perspective, No. 1.

“No. 2, until we have a vaccine, drugs to treat it or testing ramps up to get a better snapshot, social distancing is going to be in our talking points and in the way we do business for some time.”

New Hanover County instituted more testing for those who exhibited a checklist of symptoms at a drivethrough, open-air location at the end of April to get a better idea of how many cases exist, Chris Coudriet, county manager, said on May 1.

“Everything that has been shared with us, the research, the reading is that the best and safest way to begin to reopen the economy is to have more … mass testing, and so we felt like absent the state and the federal government being able to articulate a very clear plan to us and make available the resources we needed to be ahead of that so that we could with certainty communicate to elected officials, business operators that we have a sense of how pervasive,” he said. “COVID-19 is or is not in our community … we brought this plan to bear to help with answering the question.”

The framework of reopening will likely take into account necessity versus the amount of risk, with lower-risk, higher-necessity activities potentially opening first, said Adam Jones, regional economist with the University of North Carolina Wilmington’s Swain Center.

Absolute necessities, such as medical care, have stayed open even though they’re risky when it comes to the virus, he said.

“Sort of on the other end of the spectrum are the things that are more luxuries,” Jones said. “They’re not really necessary, but they’re high health risks – so concerts and places where crowds gather. Those are sort of the first things we close down.”

There are also mixed cases, some that are more necessary and a lowhealth risk, such as outdoor exercise, as long as people stay distanced, he said.

Reopening “probably looks like flipping it around and just reversing this pattern. We’re going to selectively reopen some of these luxury activities that are lower risk than other things. We’ve already seen this here in New Hanover County; the boat ramps were reopened and the marinas [in mid-April].”

Another relaxation of rules that took place last month: As of 5 p.m. April 29, restaurants in New Hanover County could begin allowing people to come into their establishments for takeout again after a county order had banned that activity.

“I think at some point, probably within the next 60 days, you’re going to start seeing restaurants reopen and bars reopen,” Saffo said on April 29. “I think social distancing requirements are going to be part of that overall plan.

“Some restaurants are going to definitely have to take out seating. A customer’s got to feel comfortable that social distancing is going to be part of their overall business plan.”

Some businesses, though, won’t be able to reopen, just like after Hurricane Florence in September 2018.

“That’s a tremendous impact to this economy and this community.”

Keeping people safe while reviving local businesses will take creativity, officials said. Discussions that include the Wilmington Chamber of Commerce are ongoing about a group of local officials, business leaders and others who can help with the reopening.

That could include revisiting some local regulations.

“We’re looking at any kind of an option that will help us get there faster,” Saffo said. “We’re looking for things, constructive things, that we could possibly implement to help businesses get back on their feet faster.”

“The main thing is, just what in the world is this gonna all look like on the other end?” Fred Meyers, founder and president of Wilmington- based Queensboro.com, said in April. “We were talking in the office today about doing a promotion for pens with your logo on it, and you know somebody was saying, ‘Well, maybe people aren’t even gonna use pens anymore after this and so what are they going to use instead?’ There’s just so much acceleration of change in our lives, in our worlds right now that it’s just so hard to know what it’s gonna look like, what’s gonna be the impact.”

“These are tough times. This is a great community, highly resilient. We’ll come out of it better and stronger,” he said. “We’ll come out of it having to do business in a different way, whether it’s the private sector or the county government, but collectively together this community is going to be stronger.”

Saffo said based on the governor’s phases for potential reopening, he’s hoping for things to get back to some sort of normal around late June, early July.

That might be too late, said Morgan, who received a citation May 1 from New Hanover County sheriff deputies for reopening before restrictions were lifted. As of May 4, the gym was still opening each day, but it was possible Morgan’s doors would be padlocked by law enforcement.

“Most small businesses may have a month or two of money that they can fall back on, but that really is set up for emergencies,” Morgan said. “It’s not set up for somebody totally shutting your business down.”

A look at the bankruptcy option