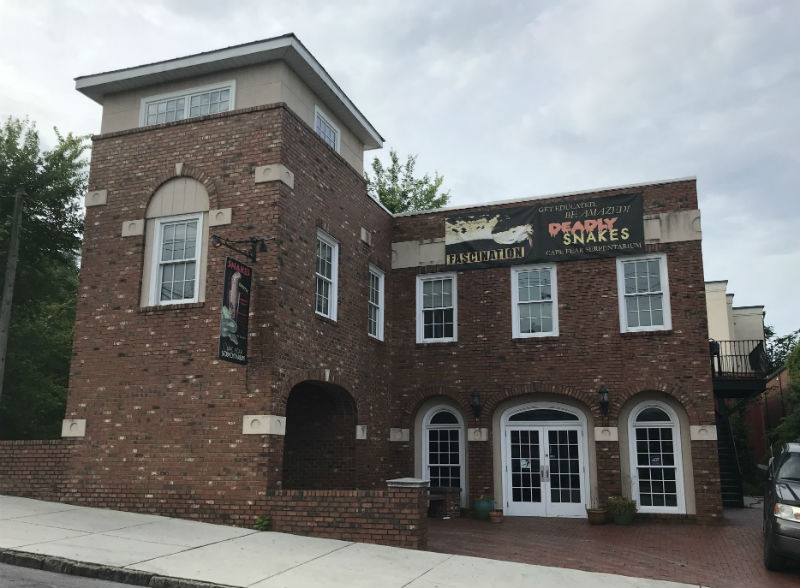 An announcement Monday on the serpentarium's Facebook page said the attraction at 20 Orange St. had closed permanently, and the building and the animals will be sold. Workers appeared to be preparing to pack up the serpentarium's contents Tuesday morning.

Cape Fear Serpentarium owner Dean Ripa was shot and killed in May last year, and his wife, Regina Ripa, is charged with first degree murder in the slaying.

Efforts to confirm with court officials whether the petition had been granted in full at a hearing Monday morning were not immediately successful Tuesday.

An appraisal in June of last year valued the 10,000-square-foot two-story serpentarium building at $985,000, according to court documents.

Ed Wolverton, president and CEO of Wilmington Downtown Inc., said Tuesday that he was surprised by the news that the serpentarium had closed permanently.

Of the serpentarium property in general, Wolverton said, "It's a very key piece of property being right there at the corner of Orange and South Front streets. It provides a transition from the residential area farther south and them more of a commercial core coming back toward Market Street."

Explaining why Arkin Ripa's interests would be served by a sale of the serpentarium building, the May 3 petition said that 20 Orange St. "is in need of significant repairs and maintenance, is a significant expense and liability risk in its current poor condition and use, and is difficult to be rented or leased in its current condition."

But the court documents also say that on April 24, the petitioner, attorney Lawrence Craige, acting as guardian of the estate for Arkin Ripa, had received an offer to lease the property. Venom Central LLC had been seeking a one-year lease beginning May 1 at the monthly rental amount of $3,650 a month. The proposed lease required the tenant to pay all utilities and included a $1 million commercial general liability policy.

The principal of Venom Central LLC is William Beard, who had been serving as director of Cape Fear Serpentarium.

An announcement on the attraction's Facebook page Monday said, "Unfortunately, we are announcing that the Cape Fear Serpentarium is now permanently closed and being dismantled at this very moment. The animals and the building are going to be sold. Despite our best efforts in trying to keep this attraction for Wilmington, this plan to sell the serpentarium was already in motion – unbeknownst to us. All we can hope for is the best possible outcome for Arkin Ripa, Dean’s son."

The May 3 petition said that it is in the best interest of Arkin Ripa that the serpentarium building and his interest in the North College Road properties "be sold in such a way and on such terms as may be most advantageous to the interest of Arkin and pursuant to the procedure" for a private sale as provided by a state statute.

Arkin Ripa now lives with his aunt and uncle in Wilmington, the petition states. In a postnuptial agreement between Dean and Regina Ripa  in 2009, Regina Ripa had "surrendered, transferred or released her interests" in Dean Ripa's property, according to court documents, and had not filed a claim against the estate within the time allowed by state statute.