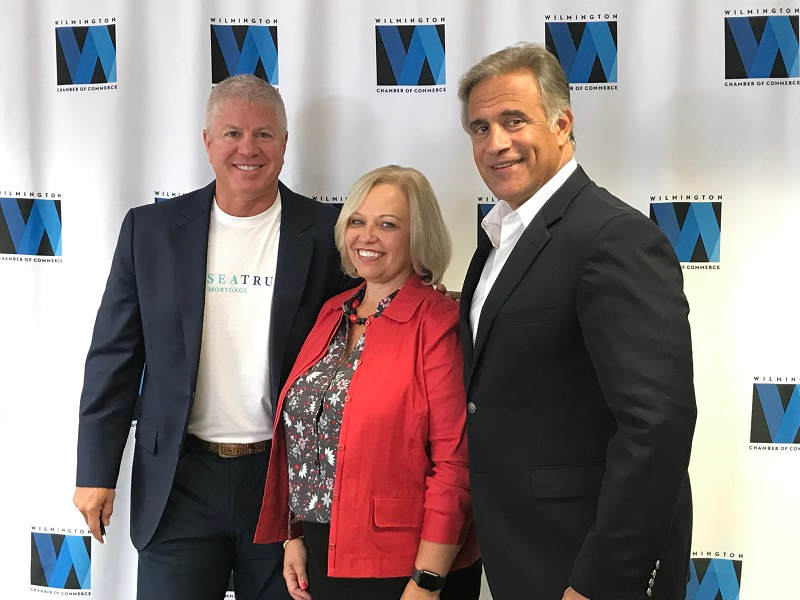 SeaTrust Mortgage Co. President John Owens (left) stands with chamber president and CEO Natalie English and Wilmington Mayor Bill Saffo during the announcement of the company's headquarters in Wilmington. (Photo by Christina Haley O'Neal)
A newly formed mortgage company has plans to establish its headquarters in Wilmington, expecting to grow its workforce to more than 100 in a couple of years, officials announced Thursday.

SeaTrust Mortgage Co., a subsidiary of South Carolina-based Community First Bank, plans to bring 15 to 20 jobs by the end of the year and grow to more than 100 jobs by 2021, John Owens, president of SeaTrust Mortgage, said during a press conference Thursday at the Wilmington Chamber of Commerce.

Speaking to that job creation before community leaders Thursday, Owens said, “We can add another 50 jobs in 2020, another 100 jobs in 2021. So that's the goal. If we can get it up to the size of the 400 mark, that is definitely my ultimate goal.”

The mortgage firm aims to find hires in Wilmington, he said.

The firm will be located at 1508 Military Cutoff Road, Suite 203, according to a news release from the Wilmington Chamber of Commerce.

The company plans to be in by October and use the space at its temporary headquarters with plans down the road to build a headquarters space for SeaTrust Mortgage somewhere in Wilmington, he said.

“We're going to have the next two years to really decide where we're going to build our building because that’s ultimately what we would like to do,” Owens said.

Owens chose Wilmington for SeaTrust Mortgage headquarters because of the rapid growth of the area and talent in Wilmington, he said.

Owens is no stranger to the mortgage industry. He was president and CEO of AmeriTrust Mortgage in Charlotte, which he founded in 1995 and grew to over 400 employees with over $2 billion in wholesale and retail loan volume, stated the release. He completed the sale company in 2015.

Owens is a well-known and highly regarded executive in the mortgage industry and authored "Corporate Cure," stated a Community First Bank news release.

“I am extremely excited about the hiring of John Owens to lead our entrance into the Mortgage Business. John brings an incredible amount of knowledge, experience and skill to our bank,” said Richard Burleson, president and CEO of Community First Bank, in the release.

Owens said that when he moved to Wilmington, he was ready to put another mortgage bank back together. Community First Bank was wanting to “grow and put some capital into it,” Owens said.

Owens said he took the role and partnered up with Community First Bank to leverage the bank and the banking license, “some of the things that are really beneficial to be partnered with a bank,” he said.

Leading up to Thursday's announcement, Owens reached out to English, formerly the public policy chief for Charlotte’s chamber, to begin talks about the area’s business climate, stated the release.

“I am thrilled to join this dynamic bank and to have this incredible opportunity. We are going to establish an innovative, technology-driven mortgage company which will provide an optimal experience for customers,” Owens said in the release.
“Between the support I have received from the Wilmington business community, and my experience working with Natalie [English] at the Charlotte Chamber, I have high hopes for the success of SeaTrust in this community.”

Scott Satterfield, CEO of Wilmington Business Development, and the Cape Fear Workforce Development Board as well as other local organizations were brought on board to assist Owens in his efforts to establish the company to Wilmington, officials said.

“We definitely want to bring more jobs to this region in this area. So whether it's multiple locations, if that's what have makes sense … one center location. This is going to be our hope and our main focus on how we can build up operations, capital markets, treasury management, all those components here in Wilmington,” he said.

While SeaTrust Mortgage is focused on establishing its Wilmington headquarters, it also has in its two- to three-year plan to grow its reach with sales centers in cities such as Charlotte and Raleigh and others in South Carolina, Virginia and Florida.

“Those are already sites that we've picked out and we already have individuals who are waiting for us to make the offer and put them to work,” Owens said. “Now all that business generated will be coming to Wilmington for it to be processed.”

Ownes said the mortgage firm could grow to more than $1 billion in volume in three years.