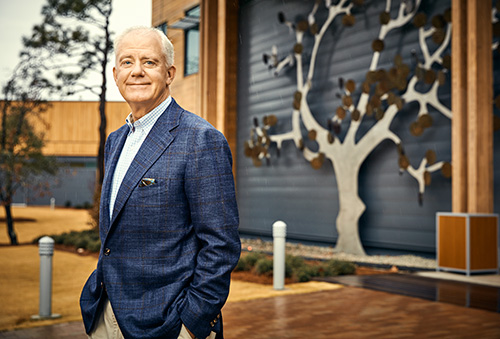 Correction: This version of the story corrects Chip Mahan's son's name to Jimmy.

Editor's Note: Chip Mahan will be the keynote speaker at this year's WilmingtonBiz Conference & Expo on March 30 at the Wilmington Convention Center.

From almost any angle, Live Oak Bank’s profile is different from that of a traditional bank. That is a deliberate strategy, says James “Chip” Mahan, the bank’s founder, chairman and CEO.

For one thing, Live Oak has a relatively small deposit portfolio and operates no retail branches: no drive-thru windows, no ATMs. But Live Oak, with its one location in a piney grove in midtown Wilmington, has a national SBA lending footprint, thanks to the savvy use of technology and innovative software programs. The technology it has developed is also sold to other financial institutions, giving Live Oak a dual-income stream.

Since its official launch in 2008, Live Oak Bancshares, the bank’s parent, has far outstripped the original vision he had for it, Mahan said.

The bank, which employs about 340 people, reported total assets topping $1 billion at the end of 2015. It is the nation’s second-largest SBA lender based on loan amount: in the current 2016 federal fiscal year it has already lent $305.5 million. And in July, Live Oak Bancshares went public, listed on the Nasdaq exchange. It is the only public company headquartered in Wilmington.

Mahan has been in banking his entire career and came to the area from Atlanta, where he had founded his first different kind of bank: Security First Network Bank, considered the first online bank, and its technology arm, S1 Corp. The Royal Bank of Canada purchased Security First in 1998. Mahan continued to lead S1 and offered to buy it. When the board turned him down, he said, he moved to Wilmington in 2006.

By the next spring, he was in discussions with David Lucht, a former colleague in Kentucky, to design another very different kind of bank. He gathered a small group of colleagues to invest in it.

“We put up $11 [million]-$12 million in capital to start the bank,” Mahan recalled. The original idea, he said, was to give investors – including himself – a fair return. “It was kind of fun.”

In the process, Mahan said, he and his fellow investors wanted a business model that would ensure the enterprise could expand in Wilmington, a spot not known as a financial center. And expand it has. For the first few years, the company leased space in Barclay Commons, increasingly cramped for room as it grew and spawned a burgeoning banking software operation that spun off in early 2012 as nCino.

In 2012 the company broke ground on a new campus on Tiburon Drive and in May 2013 moved into the first building. A second building was built with the help of local government incentives, and the property has room to house further expansions. With its cedar exterior and huge windows, the structure looks more like a mountain lodge than a bank, and that’s very much in keeping with Mahan’s determination to think differently about banking and his emphasis on openness among employees.

“The banking business is crappy,” Mahan said, recalling the early days of his career at Wachovia, when he was frustrated by the unclear answers he got to his questions about what the bank’s vision and goals were. Nowadays, an increasingly complex regulatory environment and higher capital requirements for banks makes banking a difficult business as well, he added.

“For most non-acquisitive banks, revenues are flat to declining as regulatory requirements and need for more capital make returns on that capital very difficult,” he said. “Most banks are losing people, which means brain drain.”

Live Oak’s vision and business plan focused from the beginning on providing SBA-backed loans to businesses in a few very specific industry categories.

From his roots and later business experience in Kentucky, Mahan knew horses and the veterinarians who treated them and other animals. Live Oak’s first lending category was veterinarians, and the fledgling bank found an experienced vet to serve as its domain expert – providing knowledge of the field that would help guide the bank’s lending decisions.

That model proved successful and continues today as Live Oak continues to add niche lending categories. Currently it lends to 11verticals, from medical and dental practices to funeral homes, family entertainment centers and the wine and craft beverage industry.

An effective business model is about more than achieving profit, Mahan said.

The bank’s strategies, including its employee-centric model, haven’t changed despite the company’s going public, Mahan said.

That thinking was echoed by Live Oak CFO Brett Caines in an interview with ThinkAdvisor shortly after last July’s IPO close: “The capital we raised will allow us to do more of what we already do, continuing to grow within the verticals in which we lend,” he said. “We’re going to keep running the business the way we’ve been running it.”

The capital also could support possible acquisitions by the company, Mahan has said.

A central focus on the company’s employees, Mahan explained, means treating employees well so talented people will come to the company and stay.

“People want to work for us,” he said. “It has led to our awards [such as topping American Banker magazine’s list of Best Banks to Work For in 2014 and 2015]. It’s everybody saying to each other, ‘You matter
to me.’”

Among the benefits of working for Live Oak: 100 percent company-paid health care, profit sharing for non-executive employees, an on-site gym and personal trainer sessions for each employee three times a week and a cafeteria that has won raves from Live Oak personnel.

The environment is welcoming and informal, and the perks are very competitive, but employees, from Mahan on down, work hard. He calculates he spends about 50 percent of his time traveling to visit clients, prospective clients and business partners. Live Oak owns three corporate jets, which make 500 to 600 trips each year.

Mahan, who may spend part of any given day in another state, still touts his four-block commute from home to office and favors the relatively stress-free Wilmington environment to life in Atlanta or Silicon Valley.

“There are hundreds of excellent companies [in Silicon Valley]. People are looking on LinkedIn for their next job. They’re greedy,” he said, adding that a person interested in a revolving-door career won’t fit at Live Oak. “If you want seven years, and if I get you here, I don’t think I’m going to lose you. Do you really want to go back to Atlanta or D.C.?”

One employee retention tool is Live Oak University, the in-house educational arm that helps employees understand the business of the bank, according to bank spokesman Micah Davis. Not only are knowledgeable employees more efficient, he explained, but they become more aware of other areas within the bank that might interest them.

Live Oak U, the brainchild of Mahan’s son Jimmy, reflects Mahan’s belief that the foundation for customer satisfaction is empowered employees.

“I’ll put my head on the pillow every night because I know I’ve given them tools,” Mahan said. “I hated going to my boss and asking how the bank worked. What business are we in and where are we going? We paint a target for our employees.

“The sharing of all data and consummate transparency is crucial. If all folks have maximum exposure to key elements of how to operate a business, great things happen. We are only limited in this company by our ability to attract talent.”