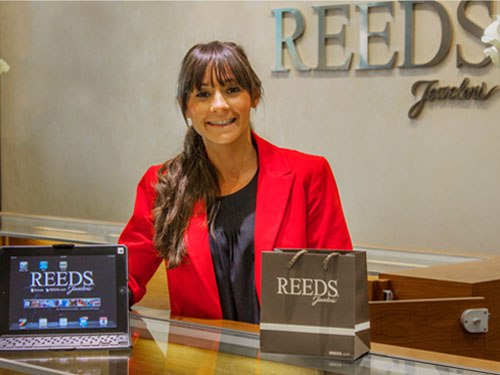 Erica Rodgers with Reeds Jewelers. The retailer announced it will accept Bitcoin as payment. (Photo c/o Reeds Jewelers)
Add Reeds Jewelers to the list of retailers willing to let customers pay with the digital currency Bitcoin.

The Wilmington-based company, a nationwide jewelry store chain, announced Monday that it will accept Bitcoin for payment at its 64 retail locations and online at www.Reeds.com.

Bitcoin is a digital currency that is based on mathematical formulas, not a country’s central bank. According to bitcoin.org, “bitcoin uses peer-to-peer technology to operate with no central authority or banks; managing transactions and the issuing of bitcoins is carried out collectively by the network.”

Mitch Cahn, Reeds’ director of marketing and business development, said the company’s primary motivation is staying on top of new technology and improving the options available to customers.

“Traditionally the jewelry industry is very antiquated. In 1998, we launched Reeds.com, which was very progressive way back then. We like to be right there at the top,” he said. “We have always been a strong online player. When Overstock, and other top-tier companies added Bitcoin, we decided to make the jump.”

Cahn also said that the Bitcoin owner is a customer demographic that Reeds wants to attract.

“There are a lot of people out there who have Bitcoin,” he said. “On the flip side of that, these Bitcoins consumers have a lot of Bitcoin but do not have a way to convert it to something more stable like gold and diamonds.”

Cahn also thinks the nature of Bitcoin will lead to larger than average sales.

“We think the consumer that owns Bitcoin will [buy] a larger ticket purchase,” he said.

Reeds partnered with Coinbase, a Bitcoin platform with more than 1.3 million consumer wallets, 32,000 merchants and 6,000 API applications, to accept the Bitcoin transactions, according to a press release.

Customers must have a Bitcoin wallet to make the purchases. Reeds will accept Bitcoin payments at the retail locations, which include local stores at Independence Mall and Mayfaire Town Center, using digital tablets.

The mechanics of accepting Bitcoin is similar to accepting other payment types, Cahn said.

“We are looking [at it] like any other processor,” he said, citing such payment methods as Visa, Mastercard, Paypal, or Amazon, with Coinbase as a middleman.

“You want to transfer $100 from my Bitcoin wallet to Reeds Jewelers, and Coinbase sends you a code,” Cahn said, describing the process. “You have 20 seconds to enter the code, and then the transaction completes.”

The consumer buys items at the current exchange rate for Bitcoin (BTC) to dollar.  Bitcoin’s value is very volatile, and during the last year, BTC has ranged from less than  $100 to more than $1000 per BTC.

Reeds receives the dollar amount from the purchases as U.S. currency, not Bitcoin.

“We are not holding onto Bitcoin as a commodity,” Cahn said. “We are looking at it like any other retail transaction.”