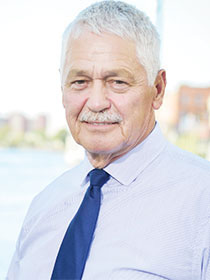 State Sen. Harper Peterson was selected as the 2020 N.C. State Lead for the National Caucus of Environmental Legislators, according to a news release.

The position “recognizes the leadership of senator Peterson within the caucus and for promoting innovative and effective environmental policy in North Carolina,” stated the release.

As NCEL State Lead, Peterson (D-New Hanover) will serve as the main point of contact in the state, coordinating in-state engagements and recruiting its colleagues to join NCEL, stated the release.

“State Leads are a crucial element of a thriving network like NCEL,” said Jeff Mauk, executive director of NCEL, in the release. “The caucus is led by legislators, so the state leads provide an active conduit of engagement and information sharing with environmental state legislators across the country."

The role comes less than a month after the N.C. League of Conservation Voters named Peterson as a featured Senate “ally” for environmental advocacy.