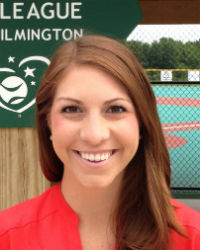 (Jennifer Bell)
Jennifer Bell has been named director of The Miracle League of Wilmington, the organization announced in a recent news release. She succeeds former director L.S. (Bo) Dean.

The Miracle League, a program of non-profit ACCESS of Wilmington, offers accessible baseball for children and adults with disabilities, the release stated. Miracle League baseball games are played at the BRAX Stadium PPD Miracle Field located in Olsen Park, off North Chase Parkway in the Murrayville section of New Hanover County.

The Miracle Field features a non-latex rubber surface safe for anyone with mobility issues, including people in wheelchairs, walkers or crutches, Dan Johnson, ACCESS of Wilmington chairman, said in the release.

As director, Bell will be responsible for raising funds to support the Miracle Field's continued operation, and for organizing athletic leagues and special events for children and adults with disabilities, according to the release.

"I am passionate about recreational opportunities for people with disabilities, and am excited to join this great organization,” Bell said.