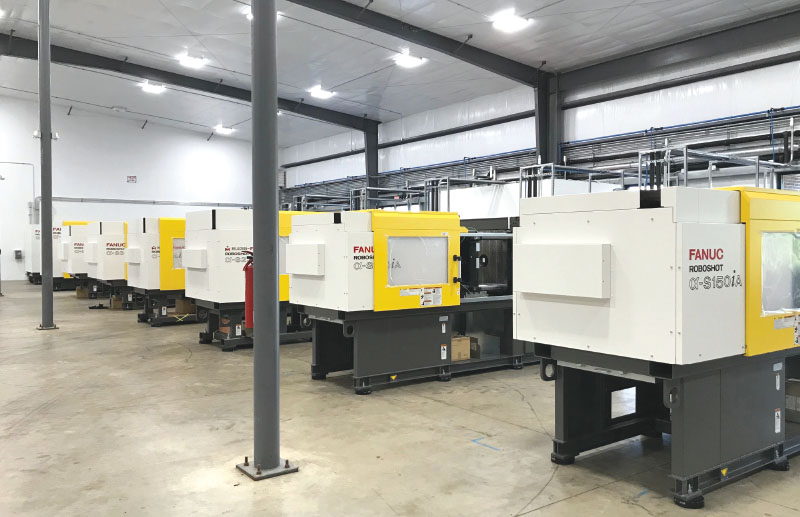 A row of injection molding machines fill the space at C2C Plastics, and one of several area companies that have worked with the Economic Development Partnership of North Carolina’s existing industries team. (Photo by Christina Haley O'Neal)
Maintaining and growing existing industry is a critical part of economic development, said James Wolfe, who recently started a new position with the Economic Development Partnership of North Carolina.

Wolfe previously served as the executive director of the Duplin County Economic Development Commission. He now serves as the southeast existing industry expansions manager with the EDPNC.

In this role, Wolfe supports business growth in a 12-county region that includes New Hanover, Pender and Brunswick counties. He is one of eight such managers across the state.

These managers work to connect existing businesses to local, state and federal resources that help with a variety of business-related activities, including finding qualified workers, securing grants and improving manufacturing processes.

The role builds off Wolfe’s previous experience in Duplin County, where he helped facilitate a $22 million expansion by United States Cold Storage in Warsaw and helped secure a $3 million state grant for poultry processor House of Raeford Farms to rebuild its Wallace operation after a 2017 fire, according to a news release.

“It’s extremely important to focus on those existing industries and help them grow. They’re the ones that are here now,” Wolfe said. That focus “goes to assist the state’s efforts of recruiting new industry as well. Because if you can demonstrate how well you support the industries once they get here, that’s a big selling point to recruiting industries.”

Wolfe started his new role with EDPNC this summer and aims to use his experience to help support and grow other businesses in southeastern North Carolina.

Out of the more than 1,100 existing businesses the EDPNC’s regional managers worked with in 2018, 88 were in the 12-county Southeast region, said John Loyack, vice president for EDPNC’s global business services.

Plastics is a plastics injection molding company that specializes in making caps and closures. The company transformed a warehouse inside the North Kerr Industrial Park to suit its manufacturing needs with plans to start operations this summer.

Over the years, the EDPNC’s existing industries managers have supported both companies, their growing needs and business in international markets, he said.

That’s one of two main issues, he said, existing industries face in the state. The other is workforce development, finding the people employers need, whether it is someone with a basic skill set or a highly educated job applicant.

In the Southeast region, Wolfe has “hit the ground running,” Loyack added. That, he said, is critical for a job that ultimately requires visiting roughly 150 businesses a year across all counties in the zone.

“We’re very excited to have James on board. I think he has unique experience, and we’re already seeing some things begin to bubble to the surface that we want to take advantage of as quickly as we can,” he said.