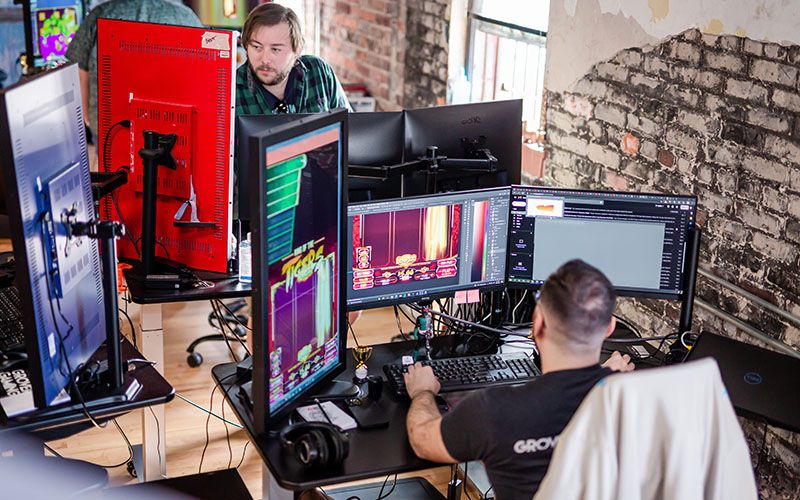 (Photos by Terah Hoobler)
Walking into a corporate office sometime before 2019 you would have seen personalities reflected in each worker’s office space.

From a desk that is minimalistic and only bares a computer and some pens to a hyper-organized one with color-coded calendars and bins for each office supply.

This dedicated-desk scenario may look different now as workplaces underwent shifts brought on by the pandemic and the realization that not all work must be done within the confines of an office.

For several tech companies establishing offices in downtown Wilmington – including two moving into space at the former Bank of America building on North Third Street – the timing allowed them to consider from the start how they plan around remote, hybrid and in-person office cultures.

Walk into Litify’s new office at 319 N. Third St. and you will find, for example, workers “hoteling,” a flexible space strategy where employees can claim or reserve a sitting or stand-up desk for their day-to-day work. This means those personalized desks may be a thing of the past for some.

Litify is a legaltech company that announced its new office space in Wilmington last year. It allows employees to work under a hybrid model, giving them the flexibility of working from home and at its office.

This same office strategy was adopted by Suzy, a consumer research software platform, which also recently opened its technology hub in downtown Wilmington in the same building as Litify.

Not all tech spaces, however, have to be set up around coming and going. When Grover Gaming opened its space in The Cotton Exchange, the game development studio planned for in-person, collaborative layouts in its office design.

Workplaces underwent a crucial test at the onset of COVID of determining whether productivity would take a hit with a work-from-home model. Several studies, some carried out before the pandemic, have illustrated that productivity working from home did not decrease but went up.

This includes Stanford University’s pre-pandemic study of 16,000 workers over nine months that found working from home increased productivity by 13%, and according to the Owl Labs 2021 State of Remote Work report, 90% of workers surveyed said they were as productive or more working remotely when compared to the office.

One important aspect of building a business and a team is having a strong team culture, which is why being able to have employees in-person at the office makes the hybrid option important, said Hogan Hagy, chief customer officer at Litify, a firm with a cloud-based offering for the litigation industry that currently has 25 employees in Wilmington.

“We feel we can build culture remotely, but it’s not as effective or efficient as working together in a shared space,” Hagy said. “The value of being together and focusing on the same mission in the same location has significant value that is often lost when working fully remote.”

Hagy said he currently tries to work at the office three to four days a week, and he enjoys having the flexibility to work at his home office when needed.

“The company supports a ‘work anywhere’ model,” he said. “We are in a remote world these days, so businesses like Litify must have options and be quick to pivot and accommodate trends that are quickly taking place in the work world.

“I believe a company allowing and supporting its team members in working anywhere shows a level of trust that is critical to maintaining a healthy culture within any business or team,” he added.

In addition to hoteling, Litify’s office has soundproof pods for taking calls and various fun and gaming areas to socialize and take breaks.

William Mansfield, chief technology officer at Suzy, views the hybrid model not as novel but as a new philosophy in the workplace.

Suzy decided to work under a hybrid model after seeing the nature of work and life had shifted.

“Things have changed, and they will continue to change. Our habits have changed because of it, and we’re not going to ignore that fact; we’re going to lean into it,” Mansfield said.

Mansfield defines a hybrid workplace as one where people can both collaborate internally and remotely in the same universe. One feature that helped Suzy with this hybrid model is its cloud-based system, he said.

The company adapted by having Zoom rooms for team members to meet, and it leased space – the top floor of the building – that can not only accommodate its workers but is much bigger than what the number of workers would have traditionally required.

“Our office is designed to be larger than one would expect in pre-COVID days. Before you may have 100 people squeezed in a room, and now instead of 100, you squeeze 40 in there that gives a lot of room,” Mansfield said. “It still allows the opportunity for people to walk by and hear a conversation and join in or to quickly rally five people to jump into a huddle room.”

One key aspect that affects whether collaboration and productivity prosper remotely is the job role, Mansfield said.

“The Wilmington office is very much heavy engineering and top-level engineers. So engineering is a place where you are behind a keyboard most of the day, no matter where you are. So, it doesn’t impact the workload so much,” Mansfield said. “It does impact, however, decision-making and collaboration on a creative process.”

The idea that creative and collaborative-based roles tend to do better work in-person at an office can be affirmed by another Wilmington tech company.

Another new company in Wilmington that is doing things differently is Grover Gaming. The Greenville, North Carolina-based company opened a game development studio in Wilmington last year citing the area’s appeal to creative and tech talent.

The studio is housed at The Cotton Exchange in downtown Wilmington and currently has 29 employees who all work directly in game creation.

“Our studio is our creative environment for making our games,” said Dotty Hales, general manager of the Wilmington studio. “Specifically in our studio in Wilmington, we house what we call studio teams made up of our artists and developers or programmers.” 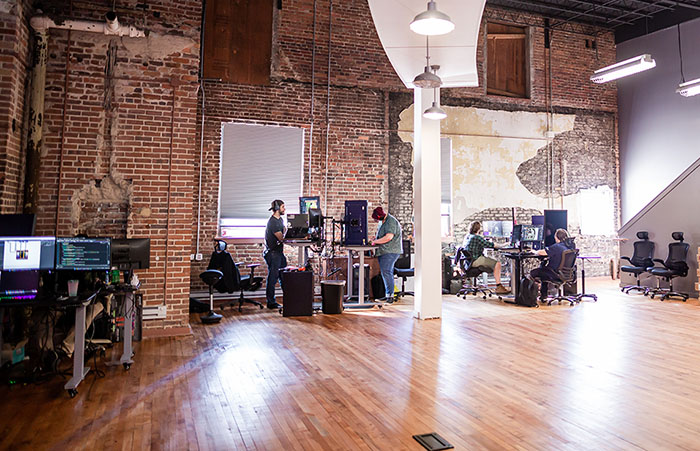 The team also includes quality assurance, an audio person, facilities and IT workers and a recruiter.

The Wilmington studio focuses on game design with an emphasis on collaborative work, which is why a hybrid model is not currently instilled.

“Our studio teams actually work in a group setting,” Hales said, “so they’re separated in our office space. They work in small groups. It’s very much a collaborative effort.”

If an employee needs to work remotely for a day or two, that can be accommodated, but the nature of work at the creative studio is so team-based that Grover Gaming needs them to be in the office every day.

The layout at The Cotton Exchange office also contributes to the collective work occurring within its walls, Hales said.

“It really lends itself to being open and airy and creative. It kind of forces that collaborative nature of work because you’re not siloed in different spaces,” Hales said.

The majority of the Wilmington studio’s employees have relocated to the region, with about 23 out of its 29 current employees recruited to the Port City.

Organizations interested in having workplace flexibility should understand their culture and feel confident that their identity is strong enough to have a hybrid workplace, said Bobby Croghan, a workplace sector leader with architecture, interior and planning service firm LS3P in Wilmington.

“However, the difference comes in the allocation of space. As hybrid workers come into the physical office, they are less burdened with the ‘stuff’ that can accumulate while working at a permanent seat,” he said. “As private offices may shrink as well due to the rise of nonpermanent seats, the formerly private space may start to take on different uses such as huddle spaces.”

“The overarching theme for creating a successful hybrid office is the need for employee education on how to use everything at their disposal, both in the office and at their home office,” Croghan said.

Traditional technology companies may have had an easier transition to a hybrid work model due to many of them having less of a traditional hierarchy and, therefore, a flatter organization style.

“This tends to allow for a freer style of work with more leeway in work styles and schedules,” Croghan said.

Leadership can make or break a hybrid model.

“No matter what type of organization, a successful hybrid working model requires a culture of trust, stemming from leadership,” Hogan said. “Leadership must trust that their employees are indeed working although they can’t see them physically in the office.”