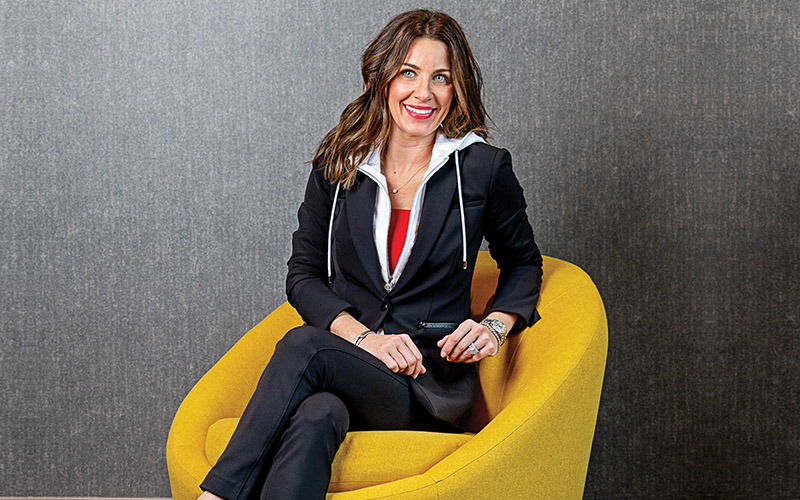 Molina is a fledgling developer and a rarity in an industry where much fewer women are at the helm of major projects.

Paseo, a word of Spanish origin that connotes a walkway for strolling, will add something new to a slumping portion of College Road. Molina’s proposal required a city rezoning of the 6-acre site, a process that can be daunting and doesn’t always result in an approval.

“It’s very risky,” Molina said, “but it just so happens that the city council and the mayor were very supportive of doing something on that property. There’s such high visibility, and they loved the idea of revitalizing it and making it higher-density, not just having another big-box type of retail there.”

Molina, a graduate of the University of North Carolina Wilmington with a degree in French, was born in Buenos Aires, Argentina. In 1985, her family moved to Chapel Hill when her father, a biochemist, joined the pharmaceutical firm that eventually became GlaxoSmithKline.

“We packed our suitcases, and my two sisters and I, we were each allowed to bring one stuffed animal,” said Molina, who picked an oversized blond-haired doll named Bibi after her maternal grandmother.

Molina attended Chapel Hill High School, but when it came time to choose a college, she wanted to leave the nest and picked UNCW. After graduation, she moved to Raleigh, where she worked in sales for a few years before going back to school to get a law degree from N.C. Central University.

Molina moved to Chicago to get her LLM, the equivalent of a master’s degree, in real estate law at John Marshall Law School. She went on to work for a prestigious Chicago law firm for six years.

Wanting to get out of the grind of working for a big law firm, Molina became in-house counsel for Craig Davis Properties, which is owned by her husband, developer Craig Davis.

“It was while working at CDP that I started to really learn about development from the perspective of a developer … and I liked what I saw and I was just very intrigued by it from the get-go,” Molina said.

“I’ve been able to learn a lot from him, and we work very well together,” Molina said.

For the new firm, she had to change her risk-averse lawyer’s mindset.

“As a developer, everything that you do is based on risk,” she said.

Bella Vista’s first project involved property that Davis had a ground lease for in Meadowmont Village, the commercial portion of a mixed-use community in Chapel Hill.

“I started to assemble my development team and interviewed different architects and civil engineering firms,” Molina said, “and I started to realize how few women were in this industry, and how overlooked women are oftentimes in commercial real estate and in development in particular.”

She decided to put together a team of all women “who have the experience and have the drive and the desire to break into aspects of the industry that historically perhaps they haven’t been a part of.”

Molina ended up scrapping plans for a 150,000-square-foot mixed-use project on the Meadowmont Village in favor of a 50-unit condominium development after re-evaluating Chapel Hill’s appetite for large-scale developments.

She said such change goes along with being a developer.

“It is a very, very tough business. It is very difficult starting out,” Molina said. “It’s difficult to be taken seriously.”

Molina explained that you not only have to sell your ability as a developer to the investors you need but also on the market in which a project is based. That can be difficult in a place like Wilmington because while the area is growing and gaining more recognition; it’s not as nationally recognized as communities like Raleigh and Durham.

“To me, that just says the opportunity here is great,” Molina said.

For Paseo, designed by architecture firm LS3P with civil engineering by SEPI, Bella Vista plans to knock the old dealership buildings down and create 298 apartments and 15,000 square feet of commercial space.

“We are full steam ahead on the design and development,” Molina said, “and we hope to have construction drawings ready in July so that we would be able to start construction in maybe August or September of this year.”

Students at nearby UNCW would be welcome as tenants at Paseo, but “our target audience is more young professionals, perhaps staff or faculty at UNCW, empty nesters or folks who are looking to have a second home here at the coast,” Molina said.

While Bella Vista’s focus in Wilmington will initially be on Paseo, Molina doesn’t discount the possibility of other opportunities in the area.

“It has been incredible to see,” she said, referring to Wilmington’s growth since she lived in the city as an undergraduate in 1997. “I think that the trends are heading in the right direction.”