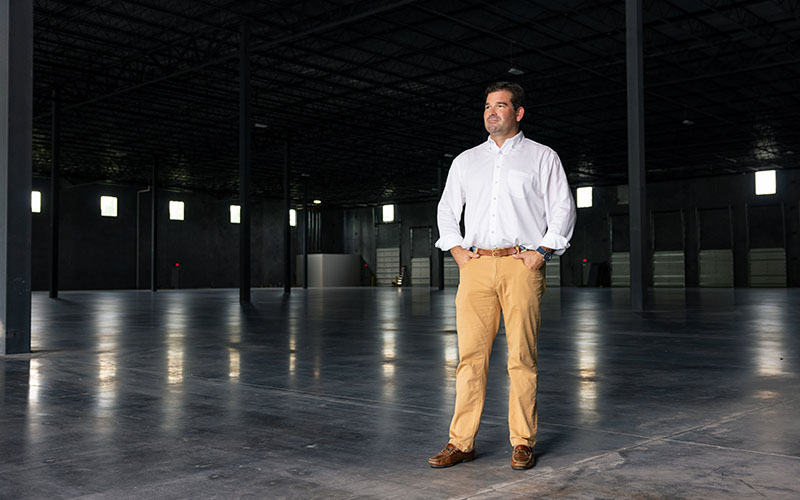 “In order for us to grow our business we had to change from a build-it-to-order company to an in-stock, ready-to-ship company. And to do that, we needed space to store inventory and more space for manufacturing,” Mojotone CEO Michael McWhorter recently recalled.

The company, which has operated in Pender County since the mid-2000s, didn’t need to venture far from its previous spot in Burgaw. Working with the county, economic developers and other partners, Mojotone found the space it needed in a 46,000-square-foot building in the Pender Industrial Park at 137 Worth Beverage Drive. The move enabled the company to consolidate from three buildings to one location at the 6.3-acre industrial site. 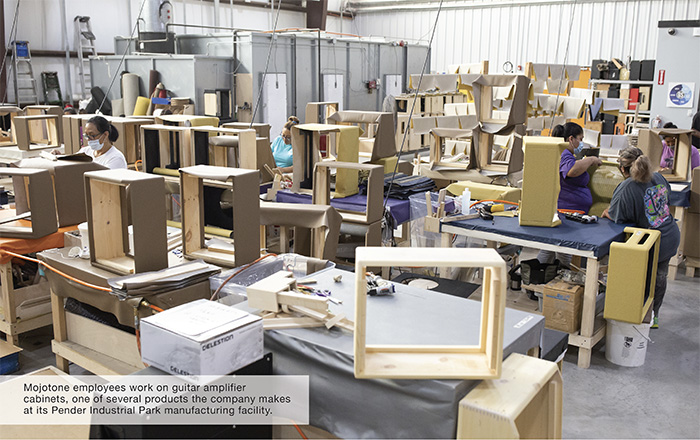 “The results were pretty obvious. If you have something in stock, more people are willing to buy it … whether it’s a set of guitar pickups, or an amplifier cabinet, or an amp kit. We saw sales increase about 28% last year. And this year, we’re up about 22% over last year’s increase,” McWhorter said.

Staying close to its previous Burgaw operation meant the company could maintain its local employment base and grow it, McWhorter said, adding that Mojotone today has nearly 80 employees.

It’s just one of many companies utilizing the tri-county region's industrial resources. From local expansions to headquarters relocations, these industrial sites and buildings are attracting companies old and new.

“Shovel-ready sites have historically led to job creation throughout the region – from Sunnyvale and our southern port corridor to U.S. 421, to North Kerr Industrial Park, all the way up to Burgaw,” Wilmington Business Development CEO Scott Satterfield said.
PENDER COUNTY

Two industrial parks in Pender County are paving the way for more businesses, with announcements this year including an expansion of Cardinal Foods’ sweet potato manufacturing operation and a new headquarters building for Polyhose Inc.

There are 115 acres left to build out in tracts around Pender Industrial Park. Besides Mojotone and Cardinal Foods, the park has attracted Wilmington Box Co., American Skin and Phoenix Molded Plastics.

“With its proximity to the region’s agribusiness resources, Pender Industrial Park offers its own unique assets. Food and beverage processing and light manufacturing are top targets there,” Satterfield said.

Across the county line off U.S. 421 is another major industrial asset to Pender County, the county-owned, 330-acre Pender Commerce Park. 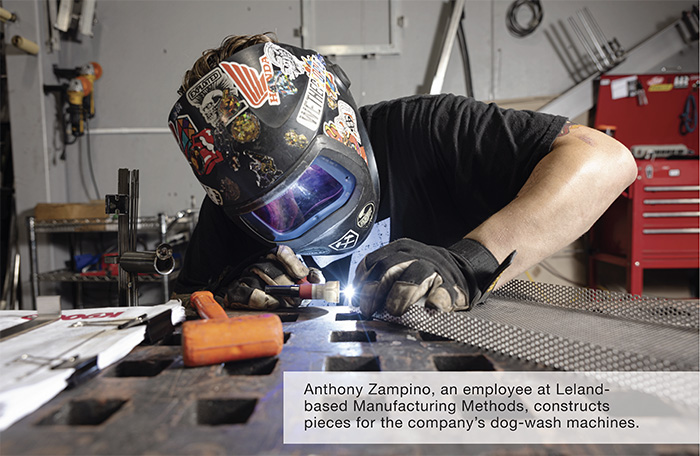 “In less than 15 years, Pender Commerce Park has gone from a mere idea to one of North Carolina’s fastest-growing industrial parks,” Satterfield said. “The park has now captured over $115 million in CapEx investment, 800-plus jobs and (more than) 1 million square feet under roof, or being planned … It is well-positioned for additional growth in warehouse/ logistics, assembly, distribution, cold storage, light manufacturing, food processing, etc.”

New to the site is the North American headquarters of Polyhose, which opened this year. It also has several other tenants including Coastal Beverage Co., Acme Smoked Fish and Empire Distributors.

Chris Ramm, manager of the development firm, said the region has been underserved in the larger industrial space market, but that is rapidly changing.

At Pender Commerce Park, Ramm is also planning a second spec building, which is in the design and development phase.

“We saw the opportunity to come in and develop a building that didn’t exist in the marketplace (at the time). But there was certainly a need,” Ramm said. “Wilmington is behind the Triad, the Charlotte market and Raleigh market as far as the growth. However, we’re teed up … It’s prime for expansion in the industrial market.”
NEW HANOVER COUNTY

Developing the area’s business and industrial parks and a new spec building site are all focuses taking place in New Hanover County.

Established industrial parks and corridors in the county – including those in the areas of Northchase, North Kerr Avenue, Dutch Square, U.S. Hwy. 421, Raleigh Street and Sunnyvale – have been home to most of the county’s industrial tenants, Satterfield said.

“We expect activity to continue at those locations as we launch initiatives for additional product,” he said.

“Rail service and runway access, in addition to close proximity to the Port of Wilmington, will entice globally-connected business operations, and we are excited to see these properties reach the marketplace,” Satterfield said.

The county is investing $3.6 million from federal funds for the extension of water and sewer infrastructure for the Blue Clay Road site.

And Wilmington International Airport officials continue to seek offers for sites at the airport’s business park, including finding a developer for a 100- room hotel.

Just south of the Pender Commerce Park in New Hanover County, another speculative space – with more than 157,000 square feet in the first portion of the Wilmington Trade Center – is in the works from Raleigh-based Edgewater Ventures.

The Wilmington Trade Center, a three-building, class A industrial project being built near the interchange of Interstate 140, is expected to eventually include 425,000 square feet in several buildings.

“We’re going deliver our building roughly in mid-September,” said Chris Norvell, an industrial partner and principal at Edgewater Ventures. “We feel really good about the activity and the market.”

Among Edgewater Ventures’ other projects is the 240,000-square-foot Port Logistics Center building off Landmark Drive.

Pacon, which manufactures wipes, pads, towels and liquids for the consumer, industrial and medical industries, has added more than 210 local jobs since its start in Brunswick County in April 2020.

Available space like the U.S. Marine building and other older buildings in Brunswick County are among previously existing product in the region that can be adjusted for various industrial reuse, said Bill Early, executive director of Brunswick Business and Industry Development. 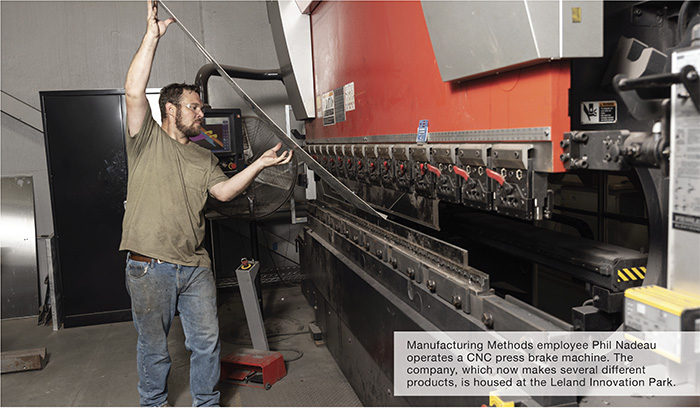 There is, however, additional room for newer product to be built for expansions and new operations.

A spec building is going up at one of the two 1,000-plus-acre industrial megasites near the Brunswick and Columbus county line.

At the International Logistics Park of North Carolina, on U.S. 74/76, two tenants – Precision Swiss Products Inc. and Tri-Tech Forensics – have leased space at the spec building, which is called the International Commerce Center.

The development is taking place through Cameron Management, which plans to build up to 300,000 square feet.

Precision Swiss Products is expected to bring 125 new jobs and $9.3 million in investment by relocating its California headquarters to Brunswick County.

And Tri-Tech Forensics is planning to relocate and grow into a 33,500-square-foot space in the center, moving from its current location in the Leland Innovation Park.

The Leland Innovation Park, however, has at least one local business growing, along with other activity.

Manufacturing Methods is expanding its building footprint at its 14-acre site in the park that houses several of its businesses.

The company, in late 2015, started operations in the park by consolidating from two former sites in Leland and one in Wilmington. Manufacturing Methods now also operates Lucid Innovative Technologies and K9000 Dog Wash USA.

“As part of the construction, we were able to add three new loading docks at our facility, which we never had before,” Peterson said, adding that the Leland Innovation Park has provided several advantages for the company’s ability to do business.

“To come in with a fresh slate to build new buildings for the sole purpose of each type of business are huge advantages. There are utilities there, and the road access to that area is super easy,” Peterson said.

Early said there are discussions to develop industrial parks toward the southern end of the county along the U.S. 17 corridor, which could help stimulate jobs and development in that area.

And for the Mid-Atlantic Industrial Rail Park megasite, Brunswick BID aims to help develop the site for potential rail users and clear about 60 acres, Early said.

“I feel like we have made huge strides in getting the International Logistics Park off the ground. And we are also going to try to … get Mid- Atlantic underway,” he said. “I have been a strong proponent that if we can get development going at one of these megasites, it will benefit both of them.”