The Making Of Midtown

LEFT: One Midtown apartments on Independence Boulevard opened in 2015. RIGHT: With her father, developer Hugh MacRae II (second from left) looking on, Rachel MacRae cuts the ribbon for the grand opening of Hanover Center in Wilmington in 1956.

The moment is captured in a photograph archived at the Oleander Co.’s office at Hanover Center.

Hanover Center these days is one of the oldest landmarks in what is now an area of town that some in the community, especially those in the real estate industry, have increasingly referred to as “midtown Wilmington.”

The phrase isn’t used as frequently as the “Monkey Junction,” “Mayfaire” or “downtown” monikers, but “midtown” has started showing up on more and more signs and business names in a rapidly expanding area.

“That’s going to be your largest population growth in the city because of the amount of land availability and redevelopment opportunities that are going to take place down there, probably in the next decade,” Wilmington Mayor Bill Saffo said.

There aren’t any municipal boundaries that mark exactly where midtown Wilmington is, but in 2015, an effort to define the area began among some of the businesses and institutions that call the area home.

In collaboration with others interested in the project, Stephanie Lanier, broker in charge and CEO of Lanier Property Group, embarked on a project to create a midtown map. 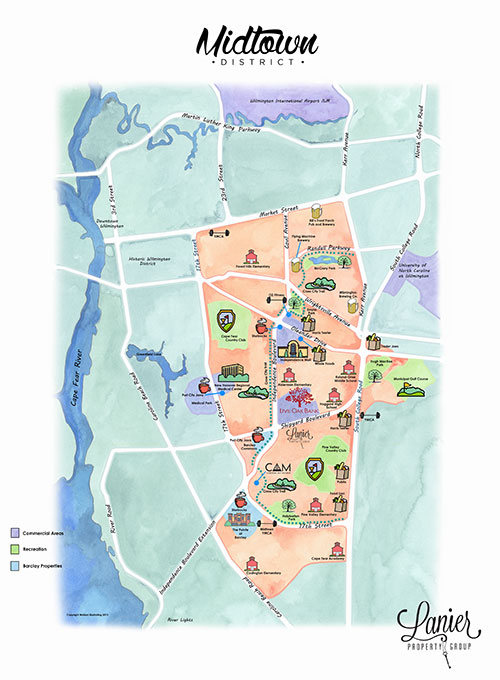 This year, Lanier has updated that map (shown at right) to reflect growth.

“It’s been helpful certainly in residential and commercial real estate for marketing purposes, and it was also helpful just because we knew there was going to be a lot of development in the area and wanted to sort of get ahead of that and build a bit of an identity around midtown,” Lanier said. “So many of the best parts of Wilmington are here.”

A few of the landmarks included on the map were in place even before annexations over the years placed the area in the middle of the city. Two examples: New Hanover Regional Medical Center opened in 1967 on South 17th Street, and Independence Mall, which is being rebranded as The Collection at Independence, opened in 1979. Cameron Art Museum relocated to property at the intersection of South 17th Street and Independence in 2001.

Last year, The Pointe 14, the movie theater anchor of The Pointe at Barclay, began welcoming patrons. The Pointe is a 34-acre commercial complex that also includes restaurants and services. Cameron Properties Land Co. partnered with Charlotte-based Collett on the project.

The Pointe and surrounding development are drawing even more attention to midtown.

“It’s fortunate from a geography perspective that it happens to be smack dab in the middle of the city. Midtown is a combination of infill with greenfield, too, with large swaths of land,” said Hill Rogers, broker in charge with Cameron Management.

More residential and commercial growth is coming to The Pointe and adjacent property in the near future.

“The Element Barclay is expanding, and the first building at Midtown Park at Barclay is coming online,” Rogers said, referring respectively to the 402-unit apartment community next to The Pointe, and an office park where Wilmington Health has leased 30,000 square feet.

Another developer, Graham Land Management, is planning a mixeduse development at Independence and Shipyard boulevards that will be called Midtown Village.

Lanier said the area’s draw can also be seen in the number of real estate offices that have come along. That includes locations for two of the area’s largest agencies.

Coldwell Banker Sea Coast Advantage opened a midtown office at Barclay Commons in March, and Intracoastal Realty opened an office at The Pointe at Barclay next to Starbucks in February this year.

Lanier Property Group has been in midtown since 2012, most recently moving to 3724 Shipyard Blvd.

“Now you’ve got so much more interest in the area, and I think that is a really strong sign of the growth,” Lanier said.

With no official boundaries, the area that makes up the midtown label can depend on who’s looking at it.

For example, though it wasn’t included in the boundaries of the map project, Saffo said he considers the University of North Carolina Wilmington part of midtown.

He describes UNCW as a major player in the city that can sometimes be overlooked as a source of population growth.

As infill and new development increases in the middle of Wilmington, a number of redevelopment projects are also in the works.

The projects, including a revamping of Independence Mall, will add more live-work-play-shop options to midtown.

“You don’t really have to leave midtown,” Lanier said, “unless you want to.”