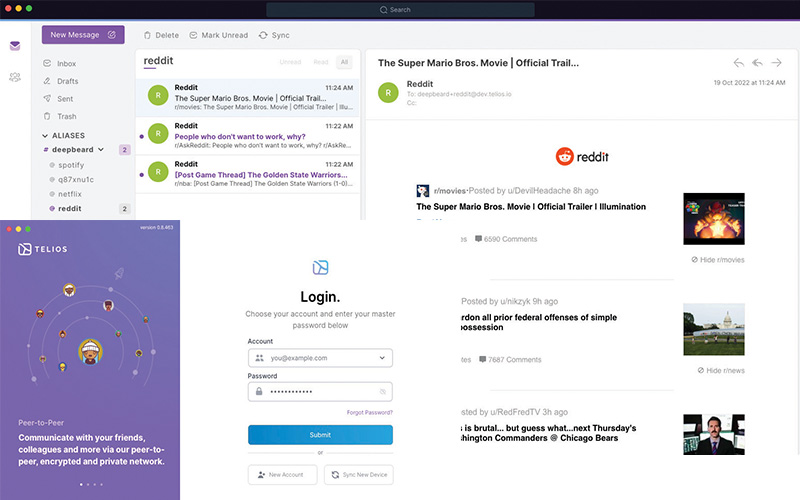 A rising concern for many of the 4 billion email users who engage with big tech companies on a daily basis is online privacy. Personal and work emails largely use Google, Apple and Microsoft, companies that store their users’ data on the cloud.

Wilmington-based Telios, however, seeks to exist in what is known as Web3, a term used to describe the concept of a digitized world that is decentralized using blockchain technology. Company leaders say this decentralization of email would give users ownership of their data, not big tech, and result in more data security and privacy.

“We store all of our users’ information encrypted on their local devices,” said Gareth Harte, founder and CEO of Telios. “We don’t have any access to it. We can’t log into your emails; we can’t read them. We have essentially zero knowledge about anything you’re doing with your email.”

The idea for Telios came to Harte when he was working at Live Oak Bank and he saw how hard it can be to send private data via email. He was concerned about his information being vulnerable.

“It’s very hard to send sensitive information over the internet,” he said. “When you want to send your tax returns to your accountant or working at a bank, when we’re sending sensitive customer data back and forth, there’s really no easy way to do it.”

He added, “That’s really because of the way the internet is designed where everything goes through the cloud.”

While the cloud has provided convenience, it has also opened users to attacks through hacking and privacy issues.

Co-founder Youri Nelson added that email technology has not seen innovation in many years, giving Telios the opportunity to not only provide a new decentralized email service but also operate as an open-source company for others to build on its foundation.

Currently, Telios has launched its beta version to anyone interested in the service; early adopters have been technology enthusiasts. Founders have also launched a pilot with businesses, such as an organization working in human trafficking that shares a lot of sensitive information.

“That’s one of the niches that we’re exploring, but really it’s for any business that is concerned about their data ownership and privacy,” Harte said.

The company also has the potential of tapping into the health care industry.

“We’re hoping that in the future we could potentially get a HIPAA compliance or certification so that small medical offices and other businesses of that nature can use us,” Nelson said.

Telios has a leadership team with decades of experience in the technology industry, with Harte having previously founded a tech-based startup and Telios co-founders Stephen Hayes and Nelson also serving as founders of other businesses.

As an early startup, with Harte currently serving as its main full-time employee, the company is looking for growth and to expand in 2023. One recent announcement may set up Telios for that path.

In October, the blockchain Coreum announced it had selected Telios as one of its first wave of grantee projects to be built on its network.

According to the grant timeline, Telios is expected to begin development in early November. Harte said the team will work on moving its infrastructure to Coreum with a slated finish time of summer 2023.

Telios is working on a mobile version of the email.

“That’s been our biggest feature because it’s hard to use an email client full time without being on your phone,” Harte said. “After we get the mobile version out, we’re working on the features now that allow you to use your own domain.”

With about 2,800 users on the beta, and a mobile app on the way, the leadership team is hoping to launch a fundraiser next year with the goal of raising $2 million to grow the company.

“Hopefully attractive investors are interested, which has been a little bit challenging in the Southeast, just because the Web3 ecosystem is maybe not as prevalent as they may be in places like Florida or Silicon Valley,” Nelson said.

Starting from an idea to protect private data shared via email leading to a year of development and an official product launch in 2021, Telios’ founders feel assured by the response they have gotten so far.

“In our experience so far and the feedback that we’ve gotten from users, it’s been really encouraging, and there’s definitely a need for it,” Nelson said. “It’s a tall mountain to climb; we’re really excited about this partnership with Corium and all the potential that this project may bring to the Web3 ecosystem.”