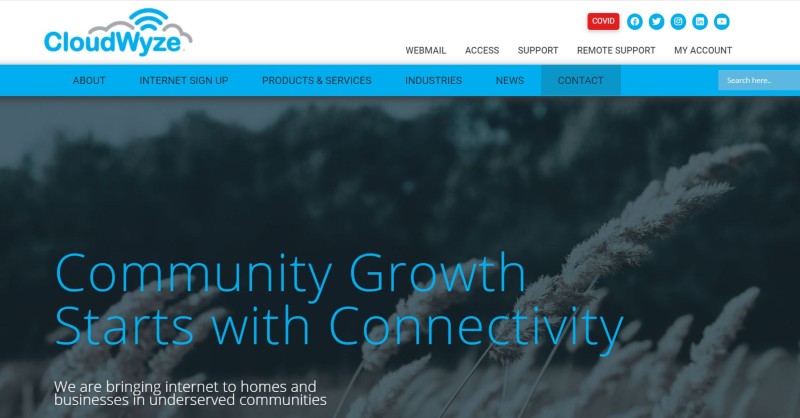 White space internet technology uses unused TV channels between active ones in the radio spectrum to provide broadband internet access. This can be used to beam broadband into harder-to-reach rural areas.

The expanded use of the white space broadband was approved earlier this year by the Federal Communications Commission.

“While we have been predominantly deploying a fixed LTE technology called Citizen Broadband Radio Service (CBRS) in rural communities, in some denser areas there are other technologies such as white space, which are available and/or better suited to provide ‘last-mile access,’” Shaun Olsen, CloudWyze CEO said in the release. “…so, TV Whitespace has been on our roadmap for some time. We’re excited at the opportunity to deploy this technology in our own hometown.

“It is our hope, over time, that white space technology will gain more traction, increasing the demand and supply as to further reduce its cost.”

TV Whitespace in New Hanover County has been used to connect devices such as traffic light cameras, safety security cameras in parks and gardens, and monitoring water quality and wetlands, according to the release.

“The county has chosen to maintain white space technology for targeted Wi-Fi access and use it for security cameras, but the technology is aging,” the release stated. “CloudWyze will be upgrading the technology used to transmit the signal, increasing speed and reliability, as well as broadening its reach.”

The county is doubling down on its efforts for public Wi-Fi, said Leslie Chaney, IT director for New Hanover County, in the release.

“Not only does the continuity of the TV Whitespace initiative reinforce New Hanover County’s status as an early adopter, this technology is easy-to-employ, and it gets internet into areas without a lot of infrastructure cost,” Chaney said. “Without having to dig trenches or build poles that tower above the trees, we are able to extend our network outside of public buildings to get more eyes and ears on our community.”

The need for more internet access was highlighted by the COVID-19 pandemic, when students and workers are relying on the internet to study and work from remote locations.

“The firm secured a partnership with Nash County in 2016, and has been building fast, reliable and widely-available internet signal to schools, businesses and households previously underserved by larger providers,” the release stated. “Over the past few years, most counties have been exploring expansion and improvement of their own infrastructure and equal access for residents. This disparity of access was brought to the surface during the shift to remote work and learning brought on during the COVID-19 pandemic.”

Olsen said both the cost of technology infrastructure and socioeconomic status of families have affected the inequality in internet access, which is why the update to TV Whitespace is important for the county.

“We look forward to this partnership and to sharing its progress,” Olsen said. “It is our mission to leverage the CloudWyze business model to work with counties across the state to ensure every business and resident of North Carolina has the same access to information, and, ultimately, to opportunity.”