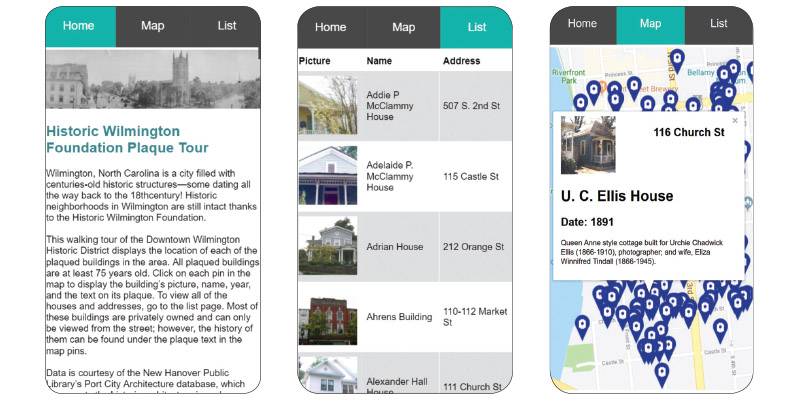 Allison Rannels, a graduate of UNCW's digital arts program, worked with the Historic Wilmington Foundation to create a mobile app that used geolocation to allow pedestrians to locate historic buildings in downtown Wilmington.
As University of North Carolina Wilmington students and graduates are starting new jobs, or looking to do so, some have entered a digital arts bachelor program that would prepare them for a rising tech-centered workforce.

UNCW launched its digital arts program in fall 2017, hoping to prepare students in all facets of digital art through coursework that includes calculus, creative writing, programming and information technology, according to a news release.

The bachelor’s program doesn’t prepare students for one career path, but rather, as more businesses are implementing technology into their operations, students get to approach different industries with the problem-solving and design skills they learn, said Ned Irvine, coordinator of the digital arts major and associate professor of studio art at UNCW.

In 2017, the state’s tech industry employed 254,230 workers while non-tech industries employed 299,518 tech workers, meaning a larger portion of tech occupations in the state are not in traditional tech companies, according to the 2019 N.C. State of Technology Industry Report.

The digital arts program came out of a collaboration between the university’s computer science and art departments as professors noticed students in the digital arts minor developing their craft.

“Teaching those students was really interesting,” Irvine said. “The work that they were creating created a lot of conversation because it was a different approach to the problems they were presented with. We had students from communications, we had a lot of film study students, and we had students that were interested in the media side of kind of their practice.”

In creating the curriculum, professors focused on skills that placed equal emphasis on aesthetics and technology, Irvine said.

“The degree is designed to immerse students in creative problem solving, using digital tools to design artifacts and experiences that explore interactions between humans and technology,” he said. “So, in the course work, that means learning everything from how to wire an Arduino sensor to laser cutting 3D prototypes to drawing and animating the human figure or developing a mobile app.”

Digital arts training can be applied to virtual reality, which allows students to make the virtual experience more realistic and easier to use.

“The entertainment industry, in terms of animation, virtual reality, gaming, all three of those industries is really growing and virtual reality has incredible potential and the design of it has everything to do with the comfort of humans with it,” he said. “Aesthetics are really intertwined at a much more visceral level because of how immersive the technology is.”

Through a senior project, students have partnered with area clients and have been worked in growing tech mediums, including artificial intelligence and app development.

“We have five faculty from studio art and computer science collaborating with a regional hospital to develop a proof of concept for an immersive environment to help relieve anxiety in child surgery patients. We have involved several classes in the project this semester,” Irvine said. “A student also partnered with the Historic Wilmington Foundation to create a mobile app that made use of the foundation’s historic plaque information. The app used geolocation in the downtown historic district to allow pedestrians to locate a historic building or home without having to go on the front porch.”

So far, one student has graduated from the digital arts program and currently 35 students are enrolled in the major, a number consistent with the program’s target.

UNCW officials hope to expand the program and hire two more faculty, and at Friday Annex, a new digital arts lab is being constructed that is slated to open in the fall, he said.

“It will serve as both a fabrication lab because we have 3D printing there, we have laser cutting, and it’s also a classroom with room for virtual reality set up,” Irvine said. “We’ll have really cool collaborative work spaces, we’ll have four pods of five students and multiple screens so that people can share what they’re doing.”

The digital arts program opens tech career paths for students, whether they want to become web developers, graphic designers, game artists, or if they want to carve out their own path. However, rather than focusing on an industry, the program is focusing on the creative process, he said.

“I think as artificial intelligence becomes more prevalent and ubiquitous, the people who shape those human-computer interactions are going to become more important and more in demand,” he said. “The range of projects that fall under the umbrella of digital arts in terms of how our program defines it are very wide. So, by making this very broad, we’re trying to give students enough flexibility in their choices to pick a practice area.”