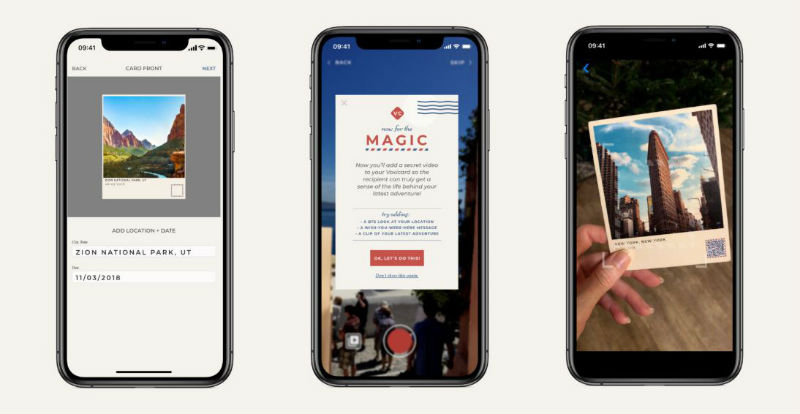 “It's a modern twist on the postcard,” Tres Altman, CEO and co-founder of Voxicard, said Friday.

The app provides a template for creating custom postcards. When a user downloads the free app, they can choose a photo or take one that will be printed on the postcard. After adding a message and the address of the person they want to send the card to, the card is printed by Voxicard’s partner, Maryland-based Indigo Ink.

“When your recipient receives the card, they get a message on the back that there's a secret video,” Altman said. “They get instructions on how to open that video message by hovering your phone's camera over the front of the card, which triggers the QR code on the front end and that opens up the video.”

Voxicard is housed in tekMountain and has three employees, including co-founder Lauren Harpst. The startup worked with an app developer based in Colorado.

The idea for Voxicard was inspired when Altman was traveling in Europe and recalled the joy he felt sending and receiving postcards.

“I came across old vintage postcards at a street market and remembered how much I love postcards,” Altman said. “I used to send them years back in my travels. It got me thinking how could I reinvent or repurpose the kind of nostalgia and the medium of a postcard in a new way?”

The app currently has about 1,000 users and has received positive feedback from those who have tried it, he said.

While Voxicard hasn’t launched its marketing plan yet, Altman said the company has target customers in mind.

“Instagram is a huge target audience for us in a way to help people take the digitized, curated images from their life experience and be able to share them in a more tangible way,” he said. “Our goal is to effectively reach that community.”

The startup also wants to connect with lifestyle brands and the business community to help provide a new way for them to reach their audience and market their product.

“Filmmakers could have a cover of the film or movie art on the front and then you reveal a short clip or a trailer for the film,” Altman said about how Voxicard can be used by businesses to advertise.

While the idea for the startup started about a year and a half ago, the company is new, having officially formed six months ago.

The startup’s download party will give people the opportunity to send their first Voxicard.

“We're excited to be a part of the Wilmington business community now and we feel like there's a lot of potential here and a lot of great talent that's kind of just finally getting some more voice,” Altman said. “Wilmington is a great place to be.”