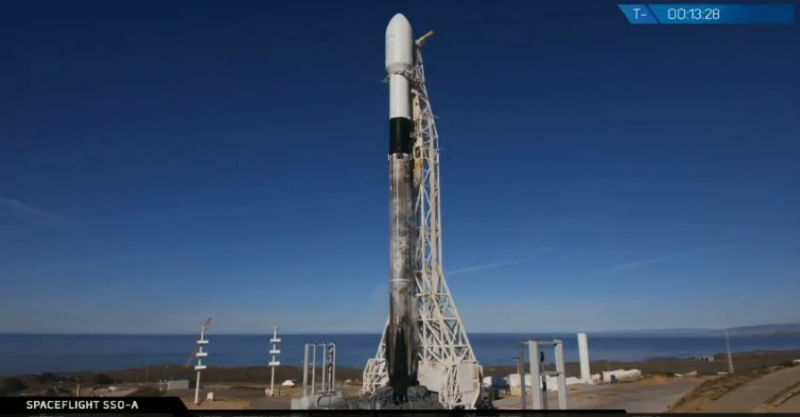 SpaceX live-streamed its rocket launch Monday, which carried a UNCW-designed satellite that will capture colored ocean images. (Screenshot of SpaceX Falcon 9 livestream)
A satellite designed at the University of North Carolina Wilmington was launched along with 63 other satellites on a SpaceX Falcon 9 rocket Monday afternoon.

Seahawk-1, a nanosatellite designed by a team led by John Morrison, a professor at UNCW’s Center for Marine Science, was launched from the Vanderburgh Air Force Base in California.

The nanosatellite is designed to capture color images of the ocean, which will be provided free to the public, along with data gathered from the images.

The launch included satellites from commercial and government entities, universities, startups and a middle school, according to a SpaceX news release.

The mission, called the Spaceflight SSO-A: SmallSat Express, is the largest single rideshare mission from a U.S.-based launch vehicle to-date, according to the release.

Seahawk-1 was developed from a collaboration with NASA’s Goddard Space Flight Center, Cloudland Instruments, a California-based company, and Clyde Space, a developer of CubeSat and small satellite spacecraft based in Scotland.

UNCW’s marine research capabilities would be expanded because the satellite allows researchers to observe the changing biology in the ocean’s surface, alerting researchers on everything from the onset and expansion of harmful algal blooms to potential fishing zones, stated a UNCW release.

The satellite project started when Morrison was trying to develop a class that would attract female students in the STEM field, said Sara Rivero-Calle, a post-doctoral research fellow at UNCW who worked with Morrison on the project.

“They saw that it would be really great to start a CubeSat project and they had no idea what they were getting into,” Rivero-Calle said.

It took three years to develop Seahawk-1 and its ocean color sensor that will capture ocean images from all over the world, which can provide a lot of valuable information.

“Ocean color is important because it tells us some information that we cannot get from other satellites,” Rivero-Calle said. “We use those subtle changes to know more about the quality of the water and the productivity of the ocean and that is important not just for management of fisheries but also the health, whether it's good for people to go swimming there or go fishing there.”

Although Seahawk-1 will capture images from all over the world, the nanosatellite will also capture images off the coast of North Carolina because it is a priority area.

“I'm interested in any sort of algal blooms that happened here, not just the ones that are toxic, but just in general and looking at variability in water runoff from the rivers,” she said. “There's a lot of organic material that flows out of the river, so we'd be interested in seeing how that affects the productivity of the ocean.”

The satellite would also be able to help determine potential fishing zones in the area.

“When there's a big alga bloom that means it's food for fish,” Rivero-Calle said. “So, if we can map those blooms, we can sort of limit the area where we expect to be a lot of fish and seabirds and it could be a potential good fishing zone. There are other parameters there at play, but that's the idea behind that.”

The pictures and data gathered will be published on the NASA OceanColor Website and on UNCW’s website.

The team hopes to have at least some images to work within a week or so, but most likely will not be fully commissioned until after the first of the year.

Besides providing useful information for researchers and the community, the satellite will help prepare UNCW students with real-world research skills, Rivero-Calle said.

“We are involving students, and this is going to be a learning experience for them,” she said. “There are many ways in which we can analyze the data, not just from the biological perspective, but from machine learning perspective and data management, those are all good skills for students to have that will translate as a skillset that they can take into whatever business they go.”