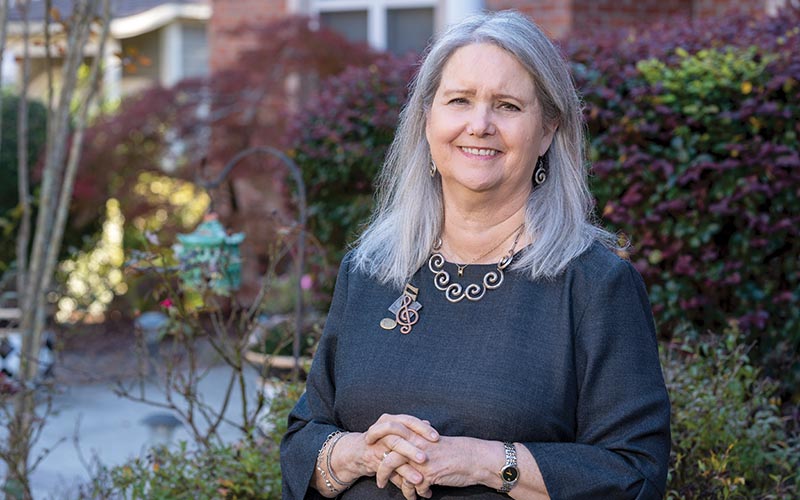 This fall the N.C. Coalition on Aging recognized her with the Pioneer Award for her decades of service to older adults. In bestowing the award, the Coalition on Aging pointed to LaFollette- Black’s accomplishments, which included producing statewide family caregiver resource guides; advancing the development of age-friendly communities throughout the coastal region; working to end adult hunger and food insecurity for people of all ages; helping unemployed older adults who want to use their skills and talents in the workplace; and working with companies to recognize the value of older workers.

In more than three decades of work with the aging, LaFollette- Black has seen people who use their release from a career to launch a new phase of life, and people who feel adrift in their later years. Now, six months after her own retirement, she’s following the advice she has given others.

“You need to retire to something, not retire from,” is her philosophy, she said, and she continued, “Look at what choices and opportunities you have because the sky’s the limit, but you have to plan for it. Otherwise, you can get in a rut and not have a purpose. Plan ahead, and have that wish list or bucket list, and get those dreams out there and try to make them happen.

“Also,” she added, “plan for the unexpected. Your journey might take a turn in another direction.”

LaFollette-Black experienced the unexpected when her husband, Jim Black, died in late October. While he had been in gradually declining health for several years, his condition quickly worsened this fall. Suddenly she found herself no longer in the caregiving mode that had been her priority since she retired from AARP at the end of June.

She is still volunteering with AARP and is in frequent communication with her successor there, Rosalie Calarco. That’s an important part of what LaFollette-Black considers her transition process.

At the core of retirement planning, according to LaFollette-Black, is to pay attention to what she calls the “Six Fs.”

“They are: finances, family, fundamentals, faith, friends and fun,” she said. “Take them into consideration as you plan your next chapter. Something I just did was to get a membership in Airlie Gardens. Now I’ve got a gardener I pay membership to.”

She said having a purpose is very important.

“I am volunteering and getting enjoyment from that,” she said. “Engaging to help others helps you as an individual with your growth and your faith.”

LaFollette-Black is also following her own advice regarding health.

Uncertain how to forge a path to better health? LaFollette-Black tells people to ask others who are aging in a healthful way for their keys to success. It could be reading, keeping up with current events and learning new things.

As for herself, she plans to spend more time with music, taking up the harp again and rejoining the choir at church.

“Just singing again, I feel more of a connection to God,” she said.

Besides having more time for music, LaFollette-Black says she’s looking forward to spending more time with her three children and their families and helping them connect with their family heritage. To learn more that she can share with them, she’s planning a trip to Galway, Ireland, next November to find out more about her mother’s family roots there.

Family history is important to La- Follette-Black. Born into the politically prominent LaFollette family of Wisconsin, she absorbed its tradition of public service. Her father worked for the U.S. Bureau of Indian Affairs, so she grew up on two Native American reservations.

“What an honor and privilege it was to live in two nations: the Papago Reservation in Sells, Arizona, and the Navajo [Nation] Reservation in Window Rock, Arizona,” she said. “The Navajo are the largest tribe in the U.S. – a population of 186,000 – and the reservation is the size of West Virginia.

“My dad was a history teacher and basketball coach on the Papago Reservation and on the Navajo was in charge of economic development and relocation and employment assistance. I relate to the American Indian ways and words of wisdom with regard to the earth, the environment, honesty, humility, honor, truth and trust by ‘walking in beauty.’”

There are other important threads to her family story. Her paternal grandmother was a descendant of William Seward, the Secretary of State under President Andrew Johnson who pushed the U.S. to purchase Alaska from Russia for a bargain price of $7 million. And LaFollette-Black has other Alaska connections: Her maternal grandparents moved to Anchorage, where her grandfather worked for the railroad and later was appointed Alaska’s first baseball commissioner. On a trip to Alaska this coming year, LaFollette- Black plans to visit the baseball stadium that is named for him.

It’s this kind of connection to the past, while looking to the future, that she wants to explore during retirement and share with her three children and their children.

She said, “My mantra has been to empower others to learn how to appreciate the value that age brings through our life’s journey.”