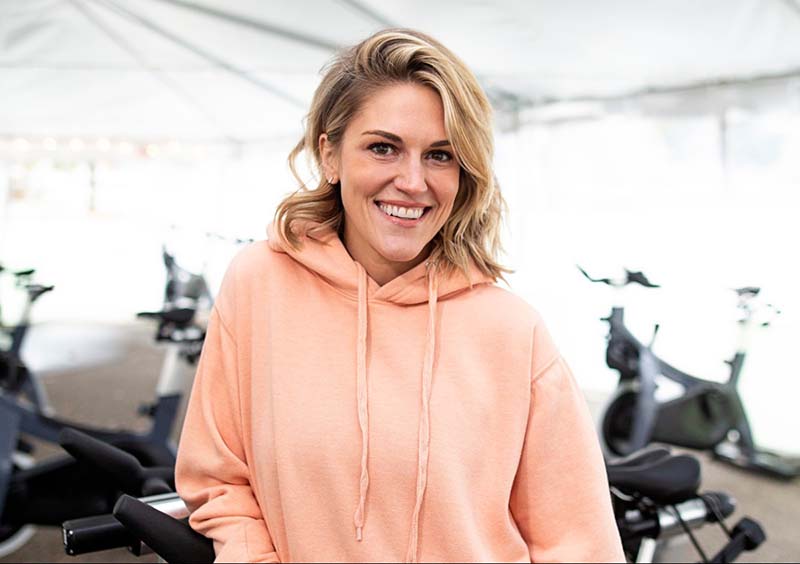 The studio first opened in November 2020, offering an outdoor and spacious exercise option amid pandemic restrictions. Prince said even though most restrictions have waned, the open-air environment will remain a core element of the Recess brand.

“There’s something special that happens when you feel the fresh air coming in and out,” she said. Compared to mostly dark, often cramped indoor cycling studios, Prince said Recess’ naturally lit and roomy classes provide a foundation for fun and camaraderie.

“You do have a little more room to breathe and feel like you’re safe,” she said.

Recess classes are led by one of its three instructors (which includes Prince) and up to 24 riders. The studio has hundreds of regular riders, Prince said, and is training four additional instructors to gear up for adding on more classes associated with the relocation.

“We have the highest quality bikes there are in the game,” Prince said. “There is no studio like us out there that has the ability to add as much resistance to your wheels so you can really take a big push and accelerate your heart rate and then release that, and breathe and dance and sing.”

The studio prides itself in its non-judgemental and accepting atmosphere – an environment Prince said she’s never before experienced in the numerous cycling studios she has visited. “In this community that we've built, people are showing up for each other, more so than even for themselves,” she said.

This year, Prince encountered an enormous loss: Her husband, Friend, died in a lightning strike near Masonboro Island in July at the age of 33. The couple had moved to Wrightsville Beach from New York City during the pandemic and later launched Recess together.

“He fell head over heels in love with Wilmington, the people, its beaches, the water, the lifestyle – all of it,” she said.

Friend had settled into the slower-paced lifestyle and had come to enjoy fishing, boating and riding bikes during his time in the area, Prince said. Their stay in Wrightsville Beach was initially intended to be short-term, but Prince said even after the tragedy, she remains committed to the community.

“There was no piece of me that even considered leaving this place that Will and I were fortunate to call home together for two years,” she said. “I really believe so wholeheartedly in what we’re creating here and the magical and really profound effect it can have on your life. It doesn’t have anything to do with your jean size or what the number says on the scale. It has everything to do with your heart and your confidence and your ability to trust other people and how to show up for each other.”

Prince credits the tight-knit group of Recess riders with giving her the strength to continue after losing Friend. “I felt incredibly safe, where I was allowed to show up in the midst of the most grief I could ever imagine, and still be smiling by the end of 45 minutes, and crying and laughing together,” she said. “I’m just overwhelmed with gratitude… We’re a resilient bunch of women.”

Recess will celebrate the move in a grand opening event next weekend. Interested riders can stay tuned to the studio’s social media channels for an official announcement on the event’s details, which Prince said she is still working to finalize.

Riders can sign up for available classes online, and first-timers can join their first class for free. “All you have to do is bring your water,” Prince said.

A potential permanent space in Autumn Hall (which would stay true to Recess’ open-air concept, with retractable walls) is also in the works, with Prince hoping to open by the end of next year.

“This community has not given up on me and I refuse to give up on them,” she said.