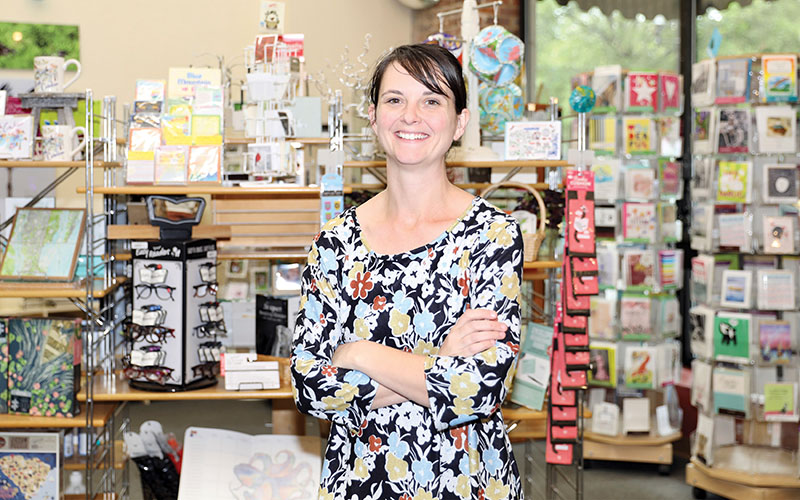 Kirsten Lovan and her husband, Derek Schmidt, recently purchased Occasions ... Just Write, a store that sells stationery, invitations, writing utensils and more. (Photo by Aris Harding)
Kirsten Lovan grew up in downtown Wilmington, in a house on the same block as the old Coca-Cola bottling plant. Her mother worked as the chef at Caffe Phoenix for well over a decade, and Lovan attended downtown schools.

Looking back, Lovan said, owning a downtown store was kind of a childhood dream, and one store in particular – Occasions … Just Write – struck her fancy as a person who loves journaling and art supplies. She’d flip through the store’s stationery and invitations, not realizing at the time that she’d be doing the same thing after she had children of her own, this time looking at them through the lens of a business owner.

Lovan and her husband, Derek Schmidt, recently purchased Occasions … Just Write for an undisclosed amount from Peggy Mahan, who owned it for a decade. Lovan said she plans to bring some new ideas to the business at 313 N. Front St., while continuing to stock items the regulars love, including high-end pens and unique gifts.

She and her husband have four children – Skyler, 2: Evee, 7; Bella, 12; and Oliver, 16. Lovan said she and her daughters did a lot of journaling together during the pandemic’s quarantine days and still do.

“We make lists,” she said. “That’s Bella’s favorite thing to do, like favorite foods lists and favorite movies.”

Meanwhile, her 7-year-old is partial to doodling, including things like groupings of ice cream cones and cupcakes.

Although Lovan knew of journal- buying options at bookstores and elsewhere, she was surprised as a business owner to learn about the variety.

“There are more journal brands than I could ever have imagined,” Lovan said.

She loves pens, paper and drawing. And mail.

When Lovan’s sister graduated from high school, “her friends who moved to different states … would send each other mail, and they would always have the most decorated envelopes,” Lovan said. “It was just like getting a piece of art in the mail, and I loved it.”

Lovan’s not the only one who delights in receiving cards, she’s found.

“I have been really pleasantly surprised how many people still send greeting cards,” she said. “We do it around holidays, and my kids always get birthday cards from their grandparents, but I just didn’t realize that there are so many people who still appreciate sending cards.”

Lovan said Just Write offers custom invitations and cards, some of which can be printed at the store.

Asked about a rack of elaborate sheets of paper in the store, Lovan said, “I just ordered a bunch of that [referred to as graphic paper in the paper business], new styles of those. Different people use it for different things. Some use it to line their shelves, some use it for mixed-media art projects. I had a woman come in and buy the last piece of a really pretty rustic looking piece with leaves on it to wrap a wedding gift.”

She said most of them are handmade.

During June, Lovan said she plans to completely rearrange the 1,100-square-foot store while restocking what customers expect to be available at Just Write. On her list for new offerings, Lovan said she wants to bring in more stationery, more high-quality art supplies and other new items like “grippy crayons” for children.

She has a couple of teachers lined up for handwriting meetups at the store.

“I’ve noticed and know a lot of kids who have very low confidence I guess is the word in their fine motor skills,” Lovan said. “Because we didn’t have to write on pen and paper for two years; you know, everything was virtual.”

Lovan and Schmidt, who were high-school sweethearts, have more than 10 years’ worth of experience in retail and merchandising, and Schmidt is the founder and CEO of two businesses – DesignLoud, a marketing agency founded in 2011, and SWELL Systems, a software as a service company started in 2017.

Lovan said she was able to talk Schmidt into buying Just Write after she had previously proposed purchasing a food truck with which she could share her love of baking. Discovering a passion for gardening during the pandemic, Lovan said she considered becoming a farmer for a minute.

But the store won out.

“So this crazy idea somehow seemed not as crazy to him, and he agreed,” Lovan said of the store.

The addition of Occasions … Just Write to the couple’s portfolio of businesses will enhance Schmidt’s other endeavors, he said, allowing him to use its products and services for his needs as well as offer them to his own clients.

“There’s a correlation where we can expand our services by utilizing some of the products and services that Occasions...Just Write will offer,” Schmidt said.

Mahan said she made the decision to sell the business because it was time “to embrace a new era.”

Lovan said Mahan’s customers have shown their appreciation for the business.

She said, “A lot of people have come by the past week [after the sale] to wish her congratulations and say they are longtime supporters of the store.”