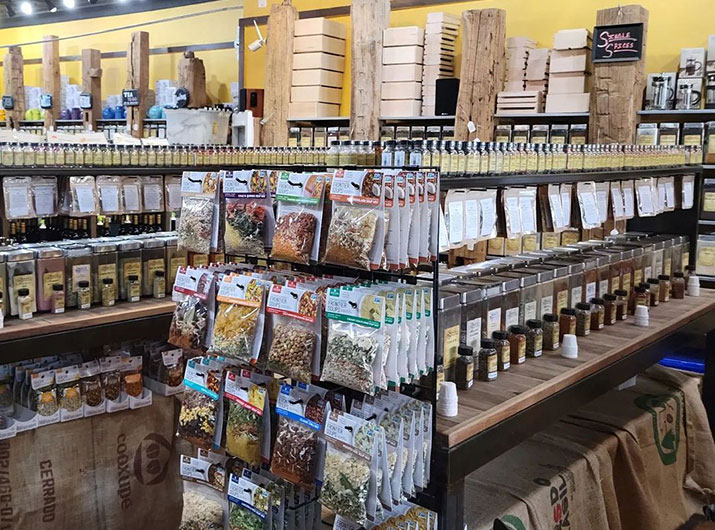 Inventory has steadily expanded to meet demand since the store opened in 2014. The selection of loose-leaf teas, for example, has grown from about 90 varieties to roughly 250 offerings. Owner Gary Coleman sees more opportunity for growth, but in recent years, he realized the business’s evolution was hampered by its increasingly tight quarters.

“As we grew and our product line grew, the space decreased,” Coleman said. The lack of space prevented Coleman, who perfects the recipes behind many of the store’s spices and other foodstuffs, from bringing in new products.

Now Coleman has secured the storefront at 6 S. Front St. where Finkelstein’s has long resided, which will function as an extension of his current space in the same building at 20 Market St. The original location will continue to sell teas and spice blends with the new adjacent location selling gourmet goodies like flavored oil and vinegar, pasta and kitchen utensils. A display kitchen on the South Front side will allow staff to demonstrate how to use some of the inventory, like the Turkish coffee pots that routinely pique customer interest.

“Rather than just explaining it, we can show them how that works,” Coleman said. He also plans to use the display kitchen to show how the store’s time-saving soup mixes and pastas can get dinner on the table with just a couple of other ingredients.

The adjoining space, which adds about 1,700 square feet to the existing footprint on Market Street, will give the staff an enlarged prep space to whip up new tea and spice blends. The store was lucky to see a bump in business during the pandemic, which Coleman attributed to more people cooking at home. International spice blends, particularly the store’s selection of Indian curries, have become very popular. With more room forthcoming, Coleman plans to satiate consumer demand with a new line of Thai curry blends, typically sold as a paste.

“We’re working on getting the three traditional Thai curries into powder form. That’s something I’ve wanted to do for a while but just didn’t have the space. Now that we’re going to have the space, we’ll be able to embrace more of that,” Coleman said.

He anticipates adding more Creole and Cajun varieties as well. The store already sells a selection of spice blends inspired by the cuisine of New Orleans, including a dried medley of onion, celery and bell pepper flakes known in that culinary tradition as the holy trinity. Other top sellers include their Tuscan spice blend, butcher’s rub seasoning and the Cape Fear steak rub, laced with dried Worcestershire and other savory flavorings.

“It’s a great steak seasoning. People come back and get literally pounds of it,” Coleman said.

Sold by the ounce or in pre-measured quantities, the store guarantees a maximum shelf life of six months for its stock of teas, single spices, spice blends and specialty salts, peppers and sugars. However, Coleman said the store’s inventory rarely sticks around that long.

“You’d be hard pressed to find anything in there more than three months old,” he said.

The two stores will be connected by a hallway so guests can freely pass between both sections. The hallway, constructed in November, will function as a “mini museum” of the building’s history featuring artifacts unearthed during construction and research Coleman has conducted at the library’s local history room.