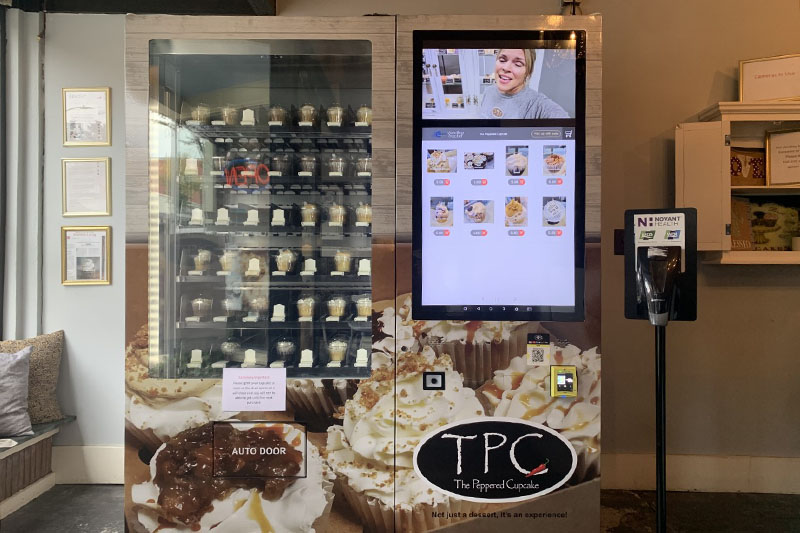 The vending machine includes a screen, where a video recorded by owner Tabitha Meready welcomes customers to the store and introduces her cupcakes and the new method of supplying them.

Meready said the vending machine allows her to keep the store open despite staffing difficulties she’s faced in the last two years. At the start of the pandemic, Meready temporarily closed the downtown location and ran the Racine Commons shop by herself. Once business started to recover, Meready tried to hire new employees, but like many service industry businesses, she struggled to keep her stores fully staffed.

When her last employee left in July, Meready temporarily closed the downtown shop again. This time, she set to work on a long-term solution to her staffing issues. A little more than two months later, the new vending machine was delivered to the shop.

Because the vending machine eliminates the need for workers at the downtown location, Meready is now able to focus on baking each day’s cupcakes and interacting with customers at the Racine Commons location. She said this change, along with eliminating advance orders for cupcakes, allows her to have a better work-life balance.

“Business is not always about growing and getting bigger and all the things that you can do,” Meready said.

The vending machine offers a pared-down menu of options compared to the Racine Commons store, where Meready will continue serving as many as 25 different flavors of cupcakes per day, each adorned to order with toppings like warm compotes, fresh fruit, toasted nuts or cracked black pepper for the eponymous peppered cupcake.

At least six flavors of cupcakes, each packaged in a plastic shell with a disposable spoon, will be stocked in the vending machine, which is refrigerated – a necessary move that initially worried Meready.

“I’m known for that buttercream being nice and soft, and once it goes into a refrigerator, it solidifies,” Meready said.

In the video playing as customers make their selections from the machine, she recommends letting the cupcakes come to room temperature before eating them.

While customers at the downtown shop may not have as many flavors to choose from when they visit, Meready said there is a perk to using the vending machine.

“This allows me to be open seven days a week,” Meready said.