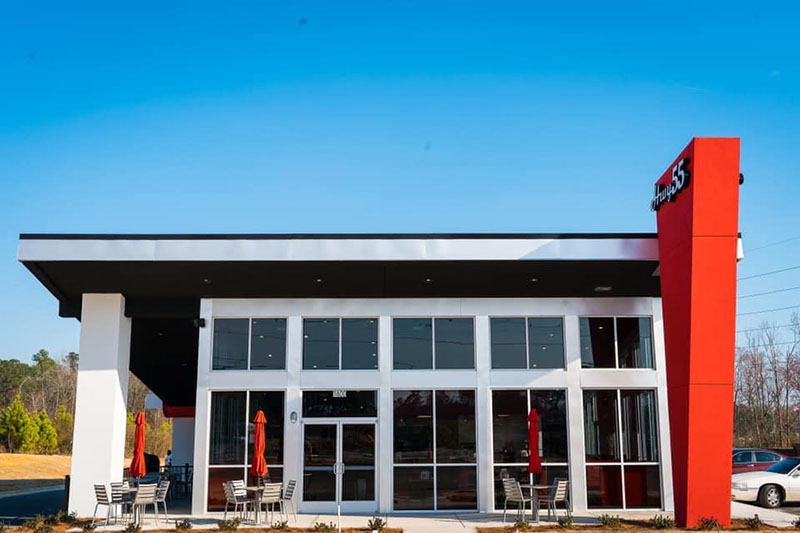 A new Hwy 55 planned in Wilmington will be built in a standalone building with a full service drive-thru in a still undetermined location. (Photo courtesy of Hwy 55)
A restaurant closing its doors usually marks the end of the story, but for Hwy 55 in Wilmington, closing the doors to its Carolina Beach Road location in August marked a new beginning.

Kachina Robertson, franchisee of the Wilmington Hwy 55, said the closure is temporary as she works with the Hwy 55 home office to find a new spot for an improved, standalone restaurant. The move is part of a companywide effort for all Hwy 55 locations to move from strip malls to standalone buildings.

“A lot of times when a business closes, people focus on the negative. It’s not always a negative situation,” said Robertson. “This particular situation is unique. We are just so focused on the future that it makes sense to pour all of our resources into that.”

The new Hwy 55 building will include a full-service drive-thru, a feature Robertson said she is excited to offer when the restaurant reopens.

“COVID taught a lot of restaurants that if you’re not good at to-go, you’re not going to survive," Robertson said. "To-go is something that we got a lot better at throughout the pandemic, and we need to have locations that can better service that side of the business because it’s growing tremendously and it’s not stopping.”

The décor of the restaurant, which Robertson described as a “retro Americana” aesthetic, will remain the same, as will the focus on customer service.

“Even though we’re adding the convenience of the drive-thru, we don’t want to lose the core of that community-diner feel that we’ve always had,” Robertson said. “We’re working to keep that.”

The organization’s emphasis on putting people first is what Robertson said she loves about working for Hwy 55. Robertson started as a server at the franchise 17 years ago, and she said it was the business’s commitment to helping its employees grow that allowed her to be in the position she now holds.

“I’ve been with Hwy 55 forever,” she said. “This was my first job and I just organically worked my way up through the company.”

With the hunt still on for the right spot in Wilmington, Robertson estimated its reopening date as a year or two in the future.

“We’d like to stay in the Monkey Junction area, but we’re looking all over Wilmington at the moment,” Robertson said, adding that she sees potential for two or three Hwy 55 locations across town eventually.