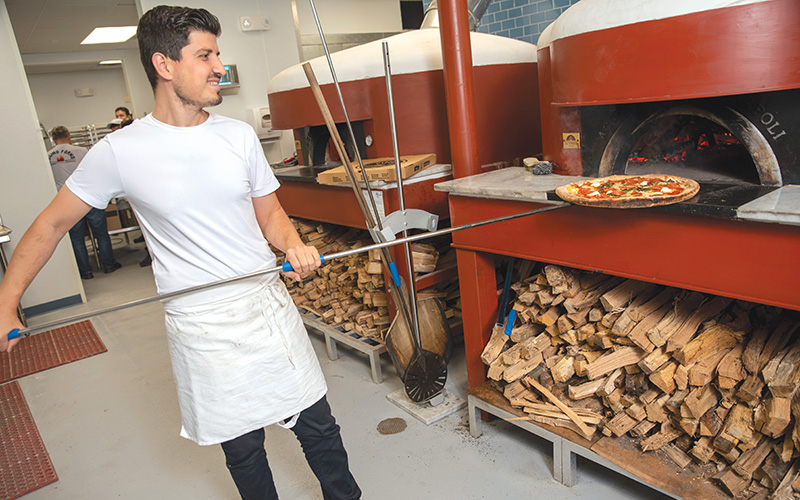 Joseph Ozbey, shown at the Wilmington location of Cugino Forno pizzeria in the city’s Soda Pop District, is one of the founders of the chain. (Photo by Michael Cline Spencer)
Three cousins. One glorious trip to a storied pizzeria in Naples. One American entrepreneurial journey.

It’s the latest location for the growing chain, started in 2017 by Turkish-born Yilmaz Guver, Adam Aksoy and Joseph Ozbey. Ozbey, at 30, is the youngest and most recent immigrant to the U.S. of the group.

“I was born and grew up in Turkey and moved to the U.S. at 18,” he said. “My cousin Yilmaz was already here; my cousin Adam came to the U.S. to earn an MBA. My only purpose was to come and learn English. I thought I’d stay for a year or two, practice my English and then go back to Turkey to do import-exports. But you really don’t know what tomorrow has for you, do you?”

Ozbey started off in New York but moved to the Southeast. For the past seven or eight years, he said, he’s been in North Carolina, home of his two cousins. In 2013, the three planned a trip back to visit family in Turkey, via Italy.

“We love Italy,” Ozbey said. “The food is the first reason but also the beaches and the people; how warm they are towards us. We try to stop there every time we go back to Turkey.”

They headed to Naples and to a pizzeria made famous by the movie Eat Pray Love – L’Antica Pizzeria da Michele.

“We went for lunch and then back for dinner,” Ozbey said, saying the cousins were bowled over by the simplicity of the operation and the quality of the pizza. “We asked ourselves, why couldn’t we do something like this in the states? They have only two different types of pizza: margherita and marinara. That’s it. Only one size. No toppings. Not even a menu. It’s their way or the highway. And you have to wait about 45 minutes to get inside.”

It took four years for inspiration to turn into solid ideas. Driving around from their homes in the Charlotte area, they decided on Greensboro as a good location and found Revolution Mill, a former Cone Mills building, for their venture. At first, however, it seemed that location was not such a good idea.

“There were some offices around the old mill but after 6 p.m. nobody was coming in and out of them,” Ozbey said. “We rented some tables and brought them to the shop, but nobody was outside, and this was 7 or 8 p.m. in April. There was not a single person passing by. But Adam said, ‘Don’t worry: We’ll bring people here.’”

While all the pizzas have the traditional Neapolitan thin crust, there are 10 choices, ranging from basic margherita and marinara to a variety of toppings. All stay true to Neapolitan tradition, and the margherita sports a “DOP” or denominazione di origine protetta designation, which roughly translates to “protected designation of origin” in English, using only certain tomatoes grown in specific locations in Italy.

“We import nearly 80% of our ingredients from the best sources in Italy, providing a taste you can’t get anywhere else. In addition, each one of our pizzas are cooked in a 900-degree oven imported from Naples containing stone from Mt. Vesuvius, making your experience at Cugino Forno just that more authentic,” the website states.

Unlike the famous Neapolitan pizzeria, Cugino Forno offers a personal-sized pizza for its lunch crowd during the workweek, while turning out only one larger size at other times. In addition to pizza, the menu includes salads and desserts, wine and beer.

The new pizzeria owners didn’t plan to expand, according to Ozbey, but out-of-towners who sampled their pizza in Greensboro started asking them to open locations elsewhere. The second Cugino Forno opened in Winston-Salem in a former R.J. Reynolds factory downtown.

Next stop was the Winston-Salem suburb of Clemmons, where Cugino Forno is in a smaller and more modern location. And then came Durham. When a New York-based company purchased and proposed to rehab a former textile mill there, it landed Asheville-based Hi-Wire Brewing as a tenant and asked Cugino Forno to open next door.

That relationship with Hi-Wire led to the opening of a fifth Cugino Forno adjoining Hi-Wire’s location in Wilmington. Once Hi-Wire was established here, the owners suggested to the Cugino Forno owners they might be interested in opening in a former auto shop that shares the same address. The cousins “jumped in the car” to come investigate, saw the potential of the bricks and mortar as well as the developing neighborhood, and the chain’s fifth location was sealed.

“When we see an old building, we are drooling. That’s basically the reason we try to choose all our locations in old buildings,” Ozbey said. “Each one has had an interesting history.”