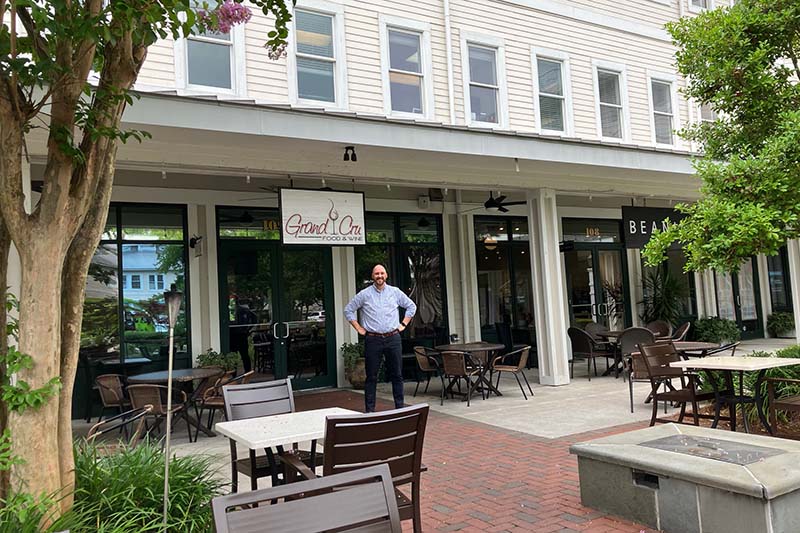 Grand Cru will host a “grand” reopening Thursday with a selection of complimentary passed hors d’oeuvres and $5 wines, beers and cocktails. The event takes place from 5 p.m. to 8 p.m., with the bar likely to stay open later.

Kirwan, who grew up on a farm, developed his culinary sensibilities in the military before refining his skills under the tutelage of French-fusion chef Thomas Keller in California’s Napa Valley. He came to Grand Cru as chef in January 2021, building on a 10-year career in food and wine. Under his supervision, Grand Cru has evolved from being primarily a wine-and-small-plates establishment to offering a full menu and expanded bar.

This spring, the restaurant’s owners offered to sell to him, and he accepted. For the past month, he’s touched up the restaurant’s appearance (adding black trim to the oyster and red walls, adding more outdoor seating) as well as the food and wine menu.

“We want to stay as true to North Carolina as possible,” he said. “Ninety percent of our food is locally or state-sourced. We have elk and wild boar. We want to elevate the food experience in Wilmington: we’re a destination location and we should offer our guests dishes they can’t find at home. We’re also 95% gluten-free, but you wouldn’t know it. For instance, our flatbread is made of sweet potato. We also offer vegetarian and vegan dishes.”

Kirwan said he has upgraded the wine menu as well, noting with pride that Grand Cru has made Wine Spectator’s award list again for a fifth consecutive year. He’s also in the running for a James Beard award nomination.

At the same time, he said, Grand Cru is not pretentious. Its menu includes the restaurant's take on comfort food (wedge salad with bacon and bleu cheese, five-cheese mac and cheese) along with upscale culinary adventures.

“We’ve brought back our BLT flatbread; our guests love it,” he said. “We also have bacon-wrapped dates stuffed with goat cheese, served with a balsamic glaze.”

As he moves forward with his new enterprise, Kirwan’s eye is on the details of daily operation as well as his aspirations for the future. Those goals include earning a Michelin star and expanding Grand Cru’s kitchen, its overall footprint and its reputation.