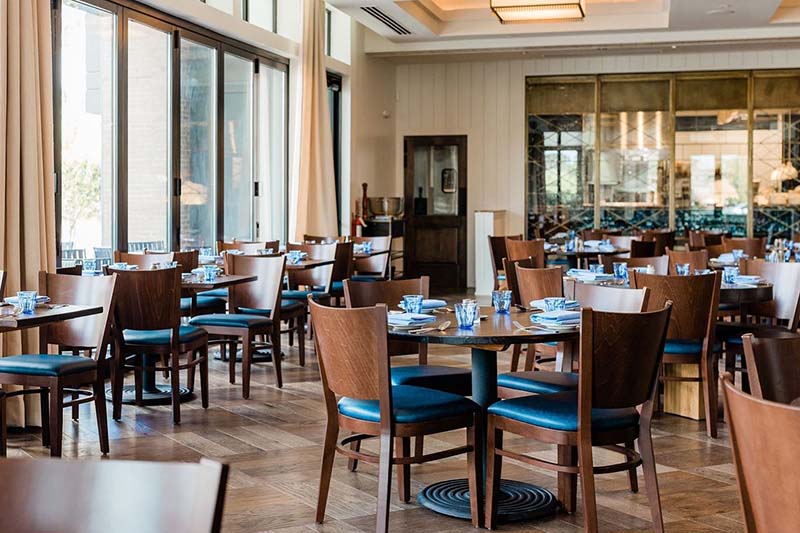 “The people of this city have high expectations for their dining experience. The bar has been raised,” Aziz said in a press release. “Restaurants here must find a niche in order to be successful, and I’m excited to create another niche in Origins.”

Since his first Wrightsville Beach restaurant in 1998, Aziz has opened 22 dining establishments in 24 years.

Piscitello’s signature pasta dishes include the pappardelle, a blend of sugo, ragu of pork and veal, and parmesan reggiano and the tagliatelle, a mix of shrimp, local mushrooms, and seafood brodo.

Equally intriguing are the restaurant’s fish dishes. The poached halibut is served with sunchoke puree, beech mushrooms, citrus emulsion and asparagus; the seared scallops are accompanied with spaetzle, parsnip puree and pickled apples.

Meat lovers will find much to satisfy their palate, too. They can choose from four filets, New York strip and ribeye steaks featuring a variety of sauces. Sides include pomme pave and candied carrots.

In keeping with fine dining experience, a sommelier will be on hand to help patrons choose the perfect wine for their meal.

Origins opened in mid-May with a fundraiser for NourishNC, a local non-profit that provides food for undernourished children in New Hanover County. The fundraiser was organized in partnership with Cape Fear Commercial, which recently moved into its new offices directly above Origins at Autumn Hall. The $50,000 raised at the restaurant’s debut will help NourishNC stock its shelves during the summer.

Cape Fear Commercial "was proud to collaborate with Aziz in bringing to life his latest vision: a coastal and elegant dining experience set to serve modern American fare," the firm shared in a press release. Three of Aziz's restaurant sales were brokered by Cape Fear Commercial in 2019; after a short retirement, Aziz returned to the restaurant game to bring Origins to life, according to the release.

The firm's new offices, Starbucks and Origins are among the newest tenants in the expansion of Autumn Hall on Eastwood Road.

Currently, Origins Food and Drink is open Tuesday through Sunday from 5 p.m. to 10 p.m. for dinner. However, in the future Aziz plans to open the restaurant seven days a week, and it will also serve lunch and brunches. Keep up with the new restaurant's announcements on its Facebook page.