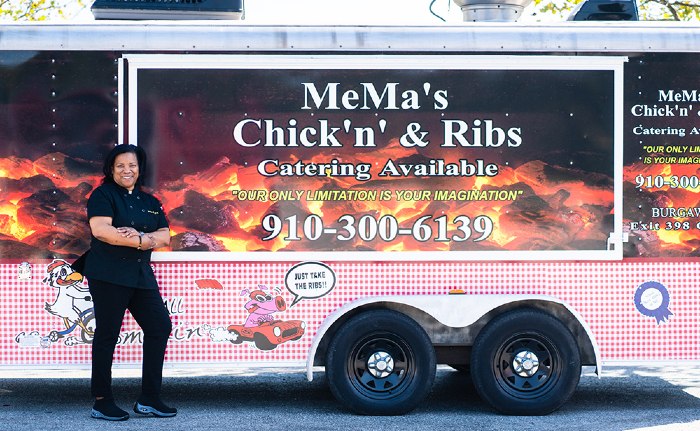 Myra (shown above) and James McDuffie, owners of MeMa’s Chick'n' & Ribs in Burgaw, plan to expand the business. (File photo)
James and Myra McDuffie have mastered the art of Southern cooking, including a barbecue sauce and meat rub that’s landing on the shelves of 20 Lowes Food stores. Now the Burgaw couple hopes to master the secret sauce of commercial development.

After successful careers, the McDuffies followed their passion for tasty homestyle food and hospitality, and in 2017 they opened MeMa’s Chick’n’ & Ribs, the name inspired by James’ mother.

Now they are partnering with Folla Capital to try to raise $5 million to build The Creek Shopping Center, a proposed project along N.C. 53 in Pender County.

Opportunities for investments in the project opened in January and will remain open until the goal is reached, according to Clem Seifert of Wilmington-based Folla Capita.

As of Feb. 28, no investors were on board, but Seifert said he was optimistic the funding would come through.

“All of us involved in the project believe that the … goal of $5 million will be reached,” he said Monday. “We are just now beginning the marketing for the offering.”

There is not a specified end date; funds can be raised until the funding goal is met. The 506(c) public offering requires a minimum investment of $25,000 from accredited investors, according to a prospectus.

The McDuffies hope to build on the success at their Burgaw restaurant, 602 US-117, fulfilling their “We bring community back to the table” motto. The goal of The Creek Shopping Center is to expand not only the restaurant’s footprint but also its vision as a vital part of the community.

The first building will house a new location for MeMa’s, which will include event spaces, an outdoor dining area, a commissary kitchen and a manufacturing facility for its signature sauce. A retail store featuring MeMa’s and other local products also is planned. A separate building is designed to accommodate additional retail outlets, office space and a coffee shop with a drive-thru, Myra McDuffie said.

“We want our backers to know what the investment is,” she said. “The Creek will offer the community an innovative way to invest in commercial real estate. They are not investing in MeMa’s. It will just be the anchor.”

Business at The Creek would create jobs and add to the local economy.

“We’re trying to keep the wealth and the value that is generated within this community,” she said. “And it’s just a great opportunity for us to bring all of this at this time to Burgaw.”

In 2019, the McDuffies purchased the land for the project and also had funding lined up for the first phase. When the pandemic arrived in the spring of 2020, the funding fell through and the couple had to figure out a new way forward. They raised $187,000 in a GoFundMe campaign, but it was far short of what was needed.

“We had to change the way we think and do business,” McDuffie said.

In the end, she believes that was a good thing.

“This allows the community members to invest directly back into improving our community,” she said. “It’s a win-win for everybody.”

McDuffie said they hope to open the facility in March 2023.