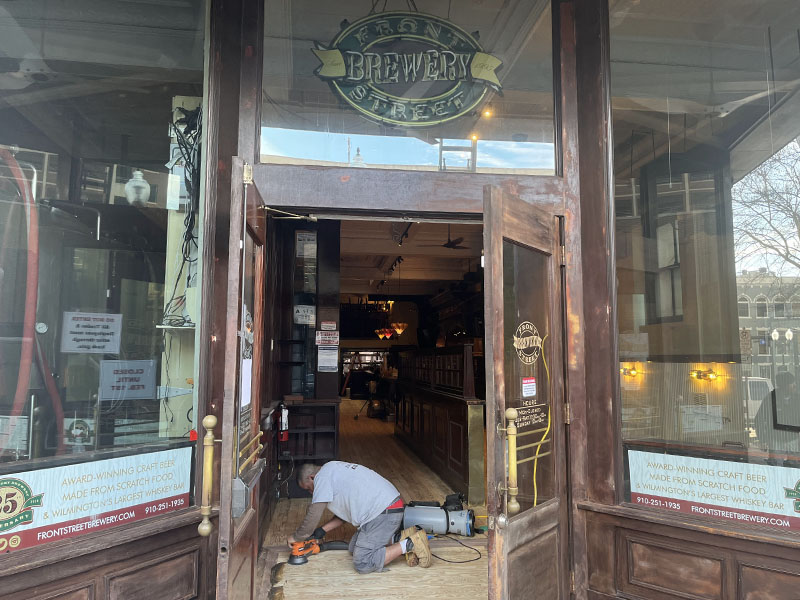 Owner Tom Harris said most of the changes customers should notice will be restoration work on the facade and floors of the 157-year-old building, which has been a Front Street staple for 26 years and was one of Wilmington’s first breweries.

Harris said he loves being in the old building at 9 N. Front St. It began its life as a dry-goods store, and some locals will remember it as home to Foy, Roe & Company, a popular men’s clothing store that occupied the building from 1940 until 1982.

Antique hardwood floors, however, aren’t the best match for a busy restaurant. So, Harris was delighted to come across a European wood-finish product that brings old wood back to life and keeps it that way. The restrooms are also getting a makeover.

“We’re breathing a little new life into our old building,” said Josh Cranford, who has been part of the management team for 15 years.

Though the updated menu has not been finalized – finishing the renovation is the priority right now – Cranford said Front Street would offer some new twists on some of its popular items but won’t be messing around too much with dishes that have kept customers coming back for years.

Cranford said the revised menu would offer more vegetarian options. Those additions are driven by a mix of customer feedback but also by Wilmington’s reputation as a destination for healthful activities, such as road races and ocean-related sporting events.

“Vegetarian doesn’t mean non-tasty. We see it as a part of Wilmington’s lifestyle,” Cranford said, adding that there are no changes in store for Front Street’s signature pulled-chicken nachos.

Some new cocktails also are on tap come February, and Cranford said the staff is always perfecting its high-end bourbon options. The staff handpicks single barrels of whiskey at top distilleries and has them bottled exclusively for Front Street, offering unique whiskeys at a modest price, Cranford said.

Although there’s no start date yet, the brewery plans to start having its signature beers and ales canned. Cranford, again, points to Wilmington’s active, beach-centered lifestyle.

“People like to have a beer in a lot of places where you can’t take glass,” he said.

Harris said that the main menu remains scaled back as the restaurant continues to ride the COVID rollercoaster.

“The old volume-based business model is not viable during COVID,” he said, “especially for restaurants without a drive-thru. So, we’ve had to reinvent the wheel and shift gears. We’ve had to streamline our menu and just go mainly with the favorites.”

Harris said running a full-service restaurant during a pandemic was the biggest challenge he’s faced in a long business career. But he knows “normal” will return at some point.

“We would love nothing more than to get back to the old days, but who knows when that will be,” Harris said. “But it will happen eventually. As they say in the Bible, this too shall pass.”

Correction: This version corrects the amount of time Front Street Brewery has been downtown and Josh Cranford's role.