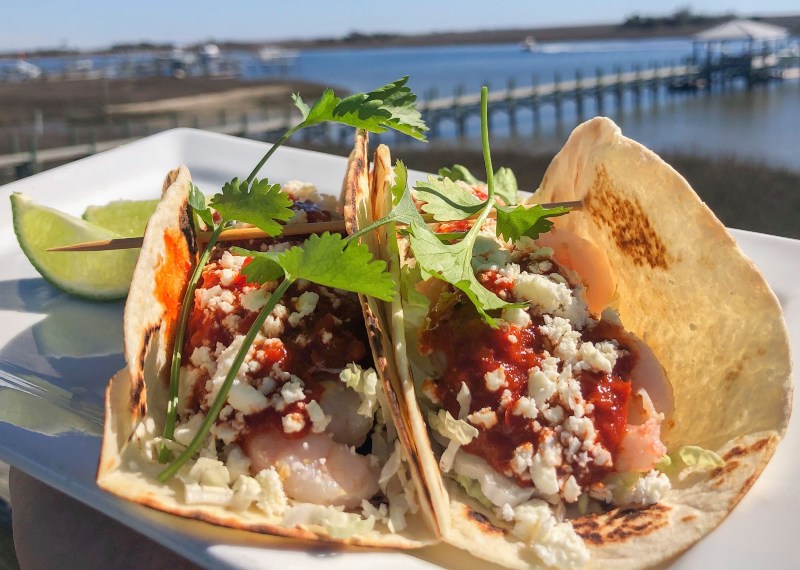 Shrimp tacos are on the menu at The Sailfish, a restaurant at the Marsh Creek at Scotts Hill Marina. (Photo courtesy of The Sailfish)
The Sailfish at Marsh Creek Marine restaurant, which started out as a casual spot mainly for boaters, is now open for its fifth season, with several new menu items and a summer concert series Thursday evenings.

Charlotte Kornegay, brand marketing and advertisement manager for the marina, said the restaurant’s clientele has steadily grown over the past five years, now attracting diners from around the Cape Fear region who come for both the food and the views.

“It’s a really nice spot to look out on the water and see lots of boats and have a bite to eat and some drinks,” Kornegay said.

Kornegay said she’s excited that things are moving in a more positive direction in terms of the pandemic, and is looking forward to a busy summer season.

“We do anticipate that people will be feeling safer this summer and we’ll be following all the recommended protocols,” Kornegay said. “We’re ready for it and excited to see everyone out for the season.”

The restaurant has an indoor dining room with an upper-level deck, along with a Steamer Bar on the lower level, where a more casual dining menu and drinks are served. While the dining room and deck are now open, the Steamer Bar is undergoing maintenance and will reopen shortly.

Chef Chris Kronenwetter is gearing up for the season by adding a few new items to the menu, including a tuna bánh mì sandwich; an Old Bay-crusted crab melt on Texas toast with Monterey Jack cheese; wild caught jumbo sea scallops with a Mediterranean couscous and lemon herb oil; and a crab and shrimp ceviche.

Kronenwetter also plans to give a few dishes that were received as specials last season a permanent place on the menu, including barbecue shrimp with white cheddar grits and a shrimp po’boy.

"The goal is for people to look at the menu and say, ‘There’s more than fried food here,'" Kronenwetter said.

The menu will also include staples such as burgers, fried seafood baskets and a filet mignon entree, as well as daily specials. The bar at The Sailfish serves a variety of cocktails, including the newly added blackberry jalapeno margarita as well local craft beer, domestics and imports.

The Sailfish, 2570 Scotts Hill Loop Road, is now open for spring/summer hours, Wednesday through Sunday from 11:30 a.m. to 9 p.m. For details on the opening of the Steamer Bar as well as the kickoff of concert series Live on the Loop, follow The Sailfish on Facebook.