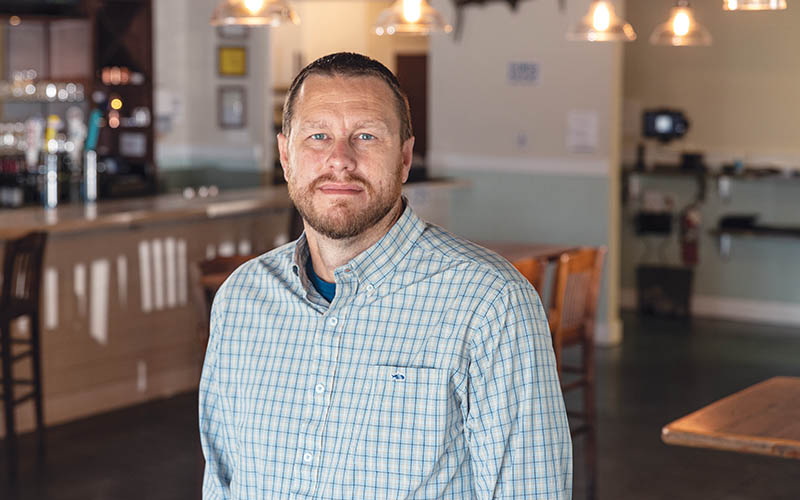 Evans Trawick started with one location of Cape Fear Seafood Company in 2008 and now has three in the Wilmington area. There’s also a Cape Fear Seafood Company in Raleigh, where two more CFSC franchises are planned. (Photo by Michael Cline Spencer)
For people of a certain age who grew up in the Wilmington area, going out to eat seafood meant a trip to Faircloth’s or one of the old fish camps like Potter’s, Gore’s and Holland’s Shelter. The settings were laid-back, even homey, and menus were pretty much limited to Calabash-style fried fish, shrimp and oysters. Well before the days of “liquor-by-the-drink,” beverages of choice were sweet tea, Pepsi in glass bottles and hot coffee.

Evans Trawick remembers those days well. When the Burgaw native decided to upgrade from the sandwich- shop business (he owned a Priddyboy’s franchise) to a traditional full-service restaurant, he thought about those once ubiquitous local seafood places.

“There really weren’t any kind of go-to places in Wilmington at the time to eat seafood,” Trawick said recently. “I felt like there was a niche in the market that needed to be filled, so that’s kind of what I went after.”

At the same time, however, Trawick didn’t want to limit his new venture to the fried fare and sides of coleslaw and fries. To be clear, those are popular staples that locals still love, including Trawick. But he wanted to offer more.

So when he opened Cape Fear Seafood Company at Monkey Junction in 2008, dishes ranged from basic to ambitious.

“Cape Fear does everything from a good old-fashioned Calabash fried platter to some really nice dishes,” Trawick said. “Back then in 2008 we started off really more, I’d probably say, on the higher end in terms of what we were trying.”

Although it can’t be compared to the current challenges restaurants face because of the coronavirus pandemic, the 2008 financial collapse and the next several years were tough times for the dining-out industry, especially for those offering higher-end dishes.

“It was 2008 and so six or seven months after we opened ... the bottom dropped out of the economy and it really probably took two, three or four years to kind of grow through that,” Trawick said.

But COVID-19 challenges aside, the restaurant has flourished and is known as a go-to location. The original Monkey Junction restaurant got some company when Trawick opened locations in Porters Neck and at Waterford in Leland.

From the dishes that arrive on the table, to the attentive service, “I think we do it well and we do it well consistently, which is one thing that I think a lot of places just struggle with,” Trawick said.

“It’s difficult. We have a large menu when we’re running our entire menu [Cape Fear is offering a limited dine-in and takeout menu during the pandemic]. But we cross-utilize a lot of different ingredients and have simplified it to the point that, you know, I’m not hand cutting French fries, but we’re probably an 85%-from-scratch kitchen.”

The popularity of the restaurant and consistency of both the food and the all-around dining experience has transformed Cape Fear Seafood into something Trawick didn’t necessarily anticipate when he opened – not only is Cape Fear a successful restaurant, it’s become a successful brand, including in Raleigh, where one CFSC franchise is open and two more are on the way.

A review of the Raleigh location in the News & Observer praised dishes such as grilled cobia and a seafood version of saltimbocca.

In the restaurant’s early days, Trawick was the lead chef. That’s no longer the case, and daily operational duties have been turned over to Bill Scott and Jackie Foust, culinary director and front of house director, respectively. Each of his restaurants has its own executive chef.

Trawick works out of an office at the Leland location but doesn’t stay stuck behind a desk.

“I tend to hit every restaurant almost every day,” he said. He also checks in with the franchise owners in Raleigh.

“We talk weekly. They worked for me for a long time, so we’ve got a great relationship,” Trawick said. “I go up every few weeks and just, you know, stick my head in the door and that kind of thing. But every quarter I inspect their unit … make sure they’re following our standards, our recipes, you know, checking on that Southern hospitality, just making sure that they’re following the blueprint.”

With COVID-19 pounding the restaurant industry, Trawick knows that staying faithful to that “blueprint” is the best way to ensure the locations will survive the pandemic. Like other restaurant owners, Trawick has pivoted to be able to operate in the pandemic economy – social distancing, limited menus and delivery are a few.

One of the changes that will definitely remain is the addition of an efficient online ordering system.

Prior to going that route, Trawick said, a staff member spent five minutes on the phone to take an order.

With the service sector still in such a challenging climate, Trawick often struggles to fill positions (His three restaurants combined employ 140, a far cry from the 12 he started with in 2008.) And having great employees is a key part of the blueprint that drives quality service, quality dishes and that other key piece: doing it well consistently.

It’s a blueprint that’s proven reliable and one that Trawick hopes to continue to build on through franchises (though he doesn’t personally plan to open more than his three). But the franchise expansion won’t be rushed.

“We’re a slow-growth concept,” Trawick said, a strategy that so far has landed Cape Fear Seafood a spot among the Faircloth’s, Potter’s and Gore’s as a seafood-dining icon.