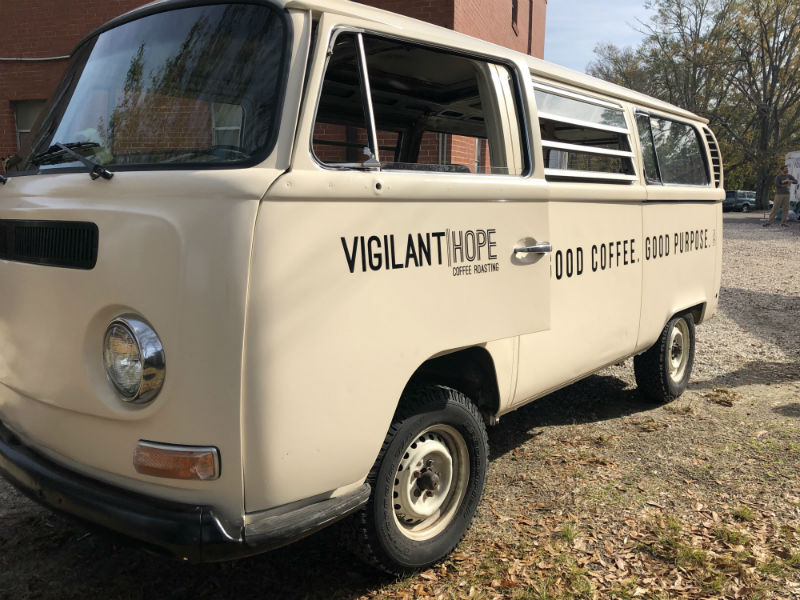 Vigilant Hope Roasting has leased space at 16th and Dock streets for its coffee roastery, as well as office and meeting space for Vigilant Hope Urban Missionaries. (Photo courtesy of Vigilant Hope)

Vigilant Hope Roasting has secured a new location for its coffee roastery.

Vigilant Hope Roasting is an offshoot of Vigilant Hope Urban Missionaries, a local faith-based organization working to fight poverty and help the homeless.

Not long ago, Vigilant Hope began selling bags of roasted coffee beans from Nicaragua as a fundraiser to support its mobile shower program. They soon realized that if they invested in a small roaster, they could roast the beans themselves, which would both cut their overhead costs and start putting people to work.

They started by distributing coffee to churches and pastors throughout the Port City to serve parishioners at services and meetings. When they first roasting last April, they were producing about 15 pounds of coffee a month, and by fall were up to 450 pounds a month, having quickly outgrown their small roaster.

With the help of local business owner Allen Renquist, of Donut Inn, Vigilant Hope Roasting was the beneficiary of a $3,500 donation last month on behalf of Wilmington’s chapter of 100 Men Who Care.

Jeremy Hardy and Jason Mitchell of Vigilant Hope said the donation went a long way to making it possible for them to secure the lease of a property owned by St. Andrews-Covenant Presbyterian Church at the corner of 16th and Dock streets.

The building will serve as a roastery as well as office and meeting space for Vigilant Hope.

“Our motto with Vigilant Hope Roasting is ‘Coffee for a Good Purpose,'” Mitchell said. “We believe that everyone has a greater purpose and this is a way to help people fulfill that calling. Many of the issues facing the homeless stem from a lack of purpose.”

One Wilmington resident who has benefited from Vigilant Hope’s mission is Therm Dereef. Formerly homeless and struggling with substance abuse, Dereef is now a full-time employee of the roastery, has his own apartment, and is committed to his sobriety. He recently finished refurbishing a Volkswagen Bus which will serve as a mobile coffee unit for the organization, and is eager to share his story with the community.

“As we dream of putting more and more people to work, we are looking at the possibility of a potential retail shop as well,” Hardy said.

Both Hardy and Mitchell are committed to employing as many individuals as possible and opening doors of opportunity to those who are normally deemed as undesirable employees, either because of their homeless status, a felony record, a substance abuse issue, and so on.

“We’re putting people to work and getting folks off the street right here in Wilmington,” Jason Mitchell said.