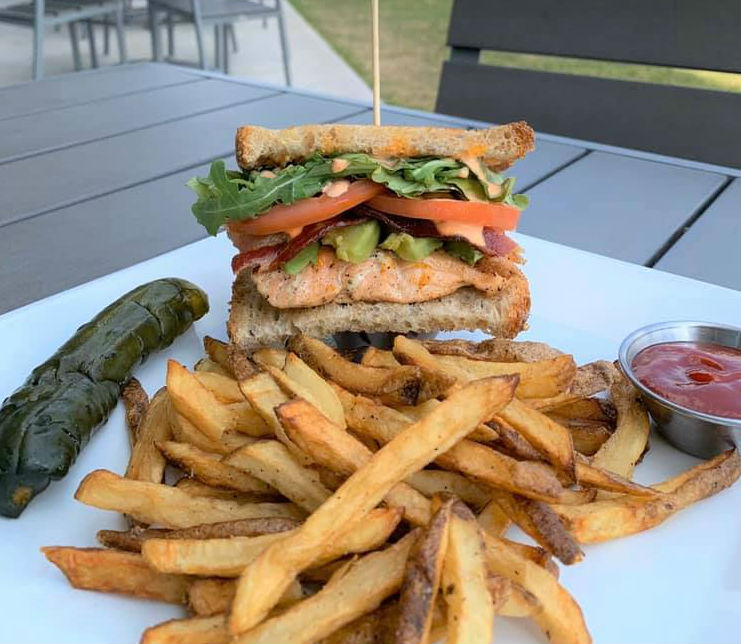 Just two days later, Buzzfeed.com granted the restaurant the title of "best mac and cheese" in the state.

“There are a lot of lists out there, but it’s still cool to know we came out on top,” said owner James Smith, of the list that was created by the media site via an algorithm of Yelp reviews.

Smith said the Carolina Beach location is running smoothly now, having been open long enough to work out the initial kinks. He is still working on improving the building’s acoustics, which he said are a challenge given that the entire structure is composed of steel, concrete and glass.

The restaurant has partnered with The Veggie Wagon, another business with locations in Carolina Beach and Wilmington, for fresh ground beef. Max Sussman, co-owner of The Veggie Wagon, has created a custom whole-muscle grind for Fork n Cork, featuring grass-fed and grain-finished beef. The Veggie Wagon grinds the beef five days a week to ensure maximum freshness, and it often arrives at the restaurant within hours.

Sussman said the grind is larger than most commercial grinds, which are often made from trimmings.

“We allow the ground meat to fall into a bag rather than forcing it into a cryovaced tube,” Sussman said. “It’s a different approach, and because the meat is so fresh and isn’t overworked before it even reaches the restaurant, it creates a different burger experience.”

Smith said he also uses the ground beef in chili and meatloaf and looks forward to creating additional hearty dishes as the cold weather approaches.

“Our larger kitchen at the CB location allows us to play,” Smith said.

As for the partnership, Sussman said he’s glad for the opportunity to provide Fork n Cork with the freshest possible ground beef for their burgers. He’s currently working on blends for some other local eateries as well, and is hopeful that the local demand for quality ground beef will grow.

Smith said he plans to launch a Bloody Mary bar during weekend brunch at the Carolina Beach location by the first weekend in November. Guests will receive a pint glass with ice and vodka, which they will take to the bar for a create-your-own experience. The bar will feature two types of Bloody Mary mix, and a variety of toppings and hot sauces, some of which will also be provided by The Veggie Wagon.

If it’s not a Bloody Mary you’re craving, head over to the Veggie Wagon for the re-opening of their popular seasonal Hot Chocolate Bar, featuring organic milks, homemade syrups and marshmallows made with local honey.