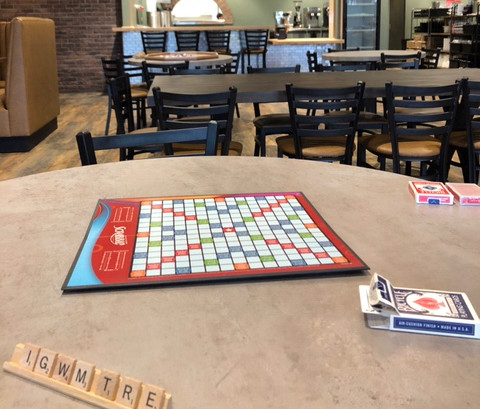 Located next door to Cape Fear Games in Anderson Square on Oleander Drive, the cafe will offer a space for friends and families to gather and play board games, cards and other games while enjoying a bite to eat, a cup of coffee or a pint of beer.

Heath Newton said he visited Cafe Mox located inside the Mox Boarding House in Seattle several years ago and was so inspired by the concept that he hoped to one day open a cafe of his own. He began saving up, and when the opportunity to purchase the neighboring space in Anderson Square was presented to him, he jumped at the chance.

“It was the ideal situation because it was located directly next to the store, meaning that we wouldn’t have to change our location,” he said.

The cafe will seat about 72 at a variety of different-sized tables. Guests can select a game from the cafe’s wide selection, each color-coded from low to high difficulty, and place orders for food from either the counter at the cafe or from a kiosk in the store.

Customers will receive a text message when their food is ready if ordering from next door. That option allows the cafe to serve all of Cape Fear Games’ customers, whether they’re browsing the store, participating in a tournament or looking for a fun place to gather and try out some new games.

Newton said there would be games for all ages and skill levels, and customers were also welcome to bring their own games.

As for the menu, Newton said he’s tried to select items that will prevent the games from getting messy. Savory selections include hot and cold sandwiches, salads, pizza poppers, popcorn chicken and waffled mac and cheese. Those looking for something sweet might want to try the cookie dough dip served with graham crackers and pretzels or the homemade, gluten-free brownies.

Sideboard will have 12 beers on tap, with a rotating selection of regional craft beer, and espresso drinks brewed with Counter Culture coffee.

Pending final inspections, Newton hopes to be open by early August, from 10 a.m. to 10 p.m. daily.