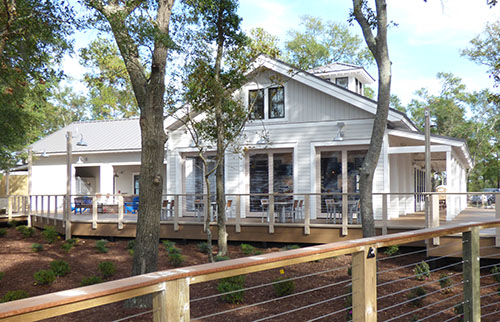 Fork-n-Cork owner James Smith will open a Smoke on the Water in RiverLights. (Photo courtesy of RiverLights)
RiverLights, a 1,400-acre mixed-use community located along the Cape Fear River, has announced the first tenants for its community hub known as Marina Village.

The RiverHouse, which faces the Cape Fear River, will be home to Smoke on the Water, a new concept from Fork-n-Cork owner James Smith, officials announced this week.

Smith said the restaurant will feature seafood specialties such a lobster rolls, crabs and oysters from along the East Coast. He describes his food at Fork-n-Cork, in downtown Wilmington, as elevated bar food or bar food that has been taken up a notch. Smoke on the Water, he said, “will be like an oyster bar or crab shack on steroids.”

“James’ food has great appeal – he draws fans near and far – and his new menu for Smoke on the Water will not disappoint,” Jim Henry, vice president of development for RiverLights, said in a news release.

“Diners will enjoy al fresco meals on the open deck overlooking the river,” Smith added. “This will soon become the destination for winding down after work, or on the weekend, with great food, a great view and equally great company. We’ll have our soft opening through late November, just in time for the grand opening of RiverLights.”

RiverLights is planning a Dec. 3 grand opening with tours of residential and commercial property. The development also announced this week that TowneBank Mortgage would open in the Marina Village. According to a statement from RiverLights, announcements regarding additional tenants are expected to be released soon.