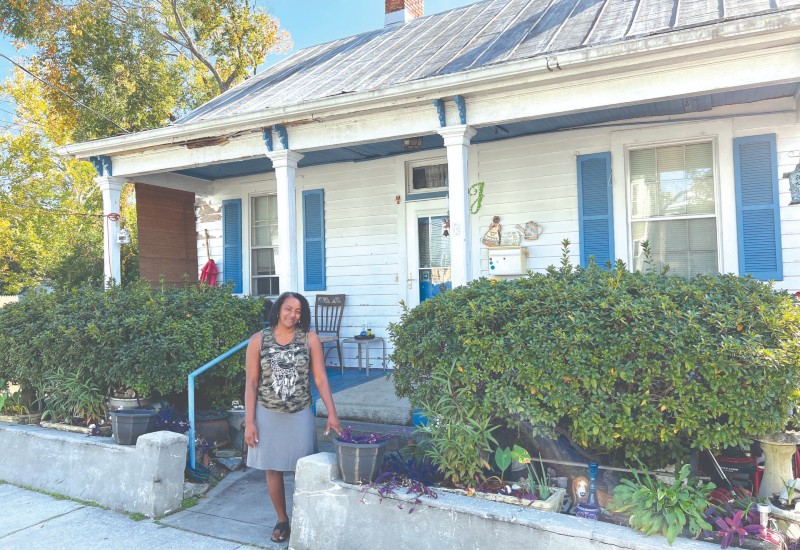 Harper remembers those times when she thinks about why that home, at 504 Ann St., is something she still cherishes.

“I remember how hard she worked. She loved this house. This is what she owned, and you got to realize back in those days, for an African American to own anything, you know, was important to them,” Harper said.

Property tax records say the 1,200-square-foot wooden cottage was built in 1903 and bought by Harper’s maternal grandmother, Early Debouse, around 1967. The home was left to Harper’s mother, Gloria Harper, before Gloria died in June last year. That means the responsibility now falls to Jaqueline Harper.

The cottage fell into disrepair over the years, with a leaky roof and decrepit wood among its problems, and intermittent repairs only amounted to band-aids. Harper’s plans for major improvements fell by the wayside, delayed by life and the home’s overwhelming degree of deterioration, which placed the property on the city of Wilmington’s demolition-by-neglect list.

Harper said a kind new neighbor steered her to the Preservation Equity Fund, a grant program of the Historic Wilmington Foundation (HWF) in partnership with Wilmington, the 1772 Foundation and New Hanover County. Travis Gilbert, executive director of HWF, said the foundation works with the city to identify owner-occupied homes on the demolition list and work to help the owners repair them.

The fund provides rehabilitation grants through HWF’s underwriters “to make these exterior changes with the short-term goal of closing the demolition by neglect case,” Gilbert said. “But the long-term goal is to preserve generational wealth within the local historic districts and overlays and stem this tide of gentrification.”

Studies have found that a lack of generational wealth has affected Black Americans in particular.

“A 2021 McKinsey report estimated that the disparity in wealth between white and Black households was over $330 billion, with 60% coming from inheritances,” a Forbes Finance Council member wrote in February last year.

The cost of repairs and home maintenance can stand in the way of property staying in a family. For Harper, losing the house would mean losing memories and an asset that had an appraised value of $154,000 in 2022. The issue becomes more problematic when the home is a historical one, a concern that led HWF to establish the historic preservation fund in 2021.

“What we fear is because exterior changes to these homes are regulated through the city of Wilmington’s historic preservation plan and certificate of appropriateness process, those modifications, those fixes, that maintenance and repair is more extensive than it would be outside of historic districts and overlays because the materials are specific,” Gilbert said. “There are only so many professionals who can perform that type of maintenance and repair. So we’re trying to provide that financial assistance to individuals who have barriers to resolving that demolition-by-neglect case.”

The funds allocated to rehabilitating the Ann Street home and a house on Seventh Street have so far amounted to $125,000, Gilbert said.

Similar programs elsewhere require historic preservation easements to be placed on the properties undergoing rehabilitation, but HWF is taking a different approach, aiming to build relationships and trust between the foundation and property owners.

Gilbert said, “We’ll approach the conversation about the easement at the end of the project, hoping that these families have learned enough along the way about historic preservation, that we’ve built enough trust between those families and the Historic Wilmington Foundation that they will want to preserve these properties in perpetuity with an historic preservation easement, which includes a right of first refusal for the foundation.”

Jan Brewington, an HWF board member and owner of Dram Tree Realty, said she’s lived downtown in Dry Pond, a nickname for a portion of the city’s southside, for 25 years, and she wishes there was more money out there to help people preserve their homes.

“I’ve seen some of my good neighbors have to literally leave their homes and go and rent somewhere, and it’s typically because these homes when they inherit them have deferred maintenance already,” Brewington said.
The problem is not limited to downtown Wilmington and areas like Dry Pond.

“We notice it downtown because it’s a more concentrated area, but honestly, if you ride around New Hanover County and beyond, you’ll see houses like in Castle Hayne, for example, that are just falling down, and it’s the same type of situation,” Brewington said.

Homes that are falling down and in massive disrepair can hurt the surrounding neighborhood, she said, so it makes sense for local governments to step in at times.

Brewington said in one case of a house near hers, city officials were able to convince the homeowner to sell a derelict property before they had to take action.

If they tore it down, Brewington explained, the homeowner “was going to have not only no house but a lien because of the cost of tearing it down. So that lien would have wiped out anything she even owned as far as the empty lot.”
This way, she added, the homeowner “was able to walk away with some money.”

Still, that asset was gone.

Losing family homes to the increasing costs of repair and maintenance, or inheritance issues such as a lack of a will, are only parts of the generational wealth puzzle. But Realtors and others in the industry often note that a house, for most people, is the biggest purchase they’ll ever make.

At Harper’s house, crews have started working on the repairs, fixing beams and replacing rotting boards.

They’ve also uncovered an electrical problem that will need to be addressed.

For Harper, who is still coping with the death of her mom, holding on to the home her grandmother bought half a century ago provides some hope.

“This house was a house of love,” she said, “and I’m trying to keep it that way.”