Luxury Sales Shine Much Of The Year 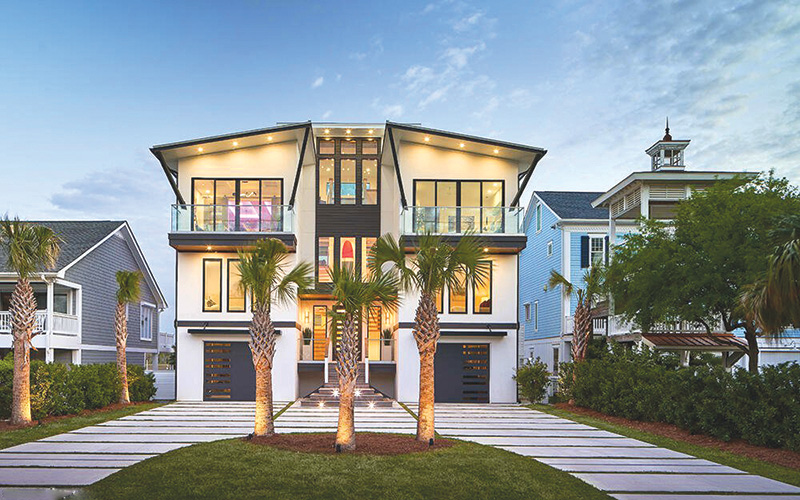 The house at 56 Pelican Drive in Wrightsville Beach sold for nearly $7.4 million this year. (Photo c/o Blue Coast Realty)
As of early December, the highest-priced sale of the year in the region’s luxury homes category, defined as houses priced at $1 million or more, was a $10 million Figure Eight Island property bought by Sally and Mack Brown, UNC’s head football coach.

In recorded history as of Dec. 5, it was the highest price ever paid for a home in New Hanover County, according to Realtors and the N.C. Regional Multiple Listing Service. The property last sold for $2.15 million in 2016, tax records show.

Less than a week before the $10 million transaction, the Browns sold another Figure Eight home for $9.5 million, after paying $5 million for it in 2020, tax records show.

These latest sales, which closed May 20 and May 26 respectively, eclipse the previous record of $6.75 million, also on Figure Eight and also completed in May. Figure Eight is a private island located in New Hanover County that has been home to numerous celebrities and nationally prominent business leaders.

For the $10 million sale of 260 Beach Road N., the Browns were represented by Sam Crittenden of Landmark Sotheby’s International Realty and the sellers by Jo El Skipper of Figure 8 Island Realty. The nearly 5,600-square-foot home has five bedrooms and 6.5 bathrooms.

While the sales of homes priced at $1 million or more have soared in the Wilmington area in recent years, the market recorded a slight dip in October. By November, though, the tri-county market of New Hanover, Brunswick and Pender counties “posted its most profitable November ever,” according to a report by Wilmington-based Just For Buyers Realty.

Last month, a total of 47 homes with a price tag of $1 million and above sold for a combined value of $74.9 million.

According to the report, published in early December, 28 out of the past 29 months recorded increases in year-to-year sales. Only in October were sales slightly down from the previous year.

“We saw the trend where each month did better than the last month, now we’re likely going to see more of a yo-yo trend when we’re going up and then going down,” said Scott Saxton, of Just For Buyers Realty, in the report. “The up and down is a sign that the area housing market is correcting itself and trying to find exactly where it belongs.

One of the homes to sell in November was 8400 Bald Eagle Lane in Porters Neck Plantation. The four-bedroom home comes with an additional two-bedroom mother-in-law suite. In all, the property measures more than 3,700 square feet.

It was built in 1979 and overlooks the Intracoastal Waterway with views of Figure Eight Island. On the market for only 10 days before going under contract, the home closed on Nov. 8 for $2.4 million and was listed by Don Harris of Wilmington-based Intracoastal Realty Corp., according to Just For Buyers Realty.

“Another 29 luxury properties went under contract in November,” the report stated. “These deals are expected to close anytime from mid-December to early February. In all the tri-county area now has $213 million plus homes on the market. That is an increase of 40% from last November.”

A luxury home in Wrightsville Beach that was listed for nearly $14 million was recently the subject of an auction that was set to start Dec. 9, with a $100,000 bidder deposit required and no reserve.

The custom-built, 8,600-square-foot house off Causeway Drive between the Intracoastal Waterway and the Atlantic Ocean was listed by Wilmington-based Landmark Sotheby’s International Realty and was being auctioned off through Sotheby’s Concierge Auctions.

“In general, auctions are ideal for one-of-a-kind, incomparable properties,” said Thomas Campbell, project manager and auction representative for Sotheby’s Concierge Auctions. “Every market has a threshold above which homes are more difficult to monetize – especially when it comes to high-end property. Typically, our sellers choose auction as a smart financial decision, looking to control the timing and terms of their sale.”

But the auction never took place.

“In cooperation with listing agents Nick Phillips and Sam Crittenden of Landmark Sotheby’s International Realty, the auction of 1 Auditorium Circle generated over 750 global prospects, over 20 qualified showings, more than 29,000 webpage views, and 6 registered bidders in 37 days. Prior to bidding opening, the seller ultimately elected their right to withdraw the property from auction. It remains on the market and is available for offers,” Sotheby’s Concierge Auctions officials said in an email Dec. 12.

The four-bedroom house, which has four full and two half bathrooms, is built to withstand a Category 5 hurricane, said Chris Parker, founder and principal engineer of the civil construction and engineering firm Parker Group, in a WilmingtonBiz Magazine feature on the house.

Parker and the late Wilmington architect Michael Kersting designed the house, built in 2019 and described as “modern with a dash of Hawaiian inspiration” in a Realtor.com article.